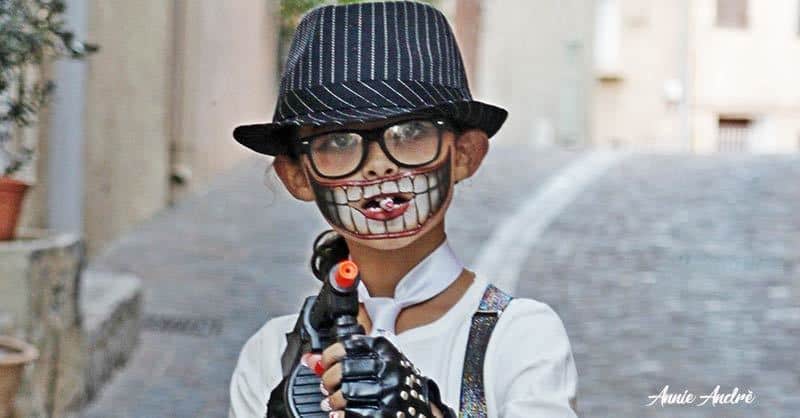 tags: French culture, French holiday, Halloween, Halloween in France
196 shares
Despite the anti-sentiment surrounding an American style Halloween and the fact that Halloween in France is relatively new, it’s still celebrated in small pockets throughout the country. Here are ten things you should know before preparing your Halloween costume that will make your French Halloween more enjoyable.

Although Halloween originates from Europe and is believed to be of Celtic origins, it’s often regarded as yet another imposition of American culture on French customs and traditions right after McDonald’s and Ketchup. This alone is enough to make some French people snub their noses at the idea of celebrating and embracing Halloween.

It’s just one of many articles you can easily find of people expressing their frustration with Halloween infiltrating French culture.

That doesn’t mean that all of France hates Halloween or that it’s not celebrated in France. That’s just not true. However, I think it’s important to understand why some French people might be averse to this imported holiday.

10 Things you should know before celebrating Halloween in France

1-Halloween is seen as a threat to existing French traditions

“Halloween is not our culture; we must stop losing our identity and, most of all, borrowing from the anglophones

The French are fiercely proud of their customs, almost to a fault. Any celebration which disrupts or takes away from those traditions is often seen as a threat.

In the case of Halloween, first introduced to France around the mid-’90s, some people think it robs the attention away from a traditional French holiday “La Toussaint,” known in English as “All Saints.”

2) Halloween is tied to the Toussaint holiday.

La Toussaint (All Saints Day) is a Catholic celebration and public holiday in France that falls on November 1st, the day after Halloween. Most French workers have November first off, and school children have roughly 2 weeks off starting mid-Octobre ending the day after Toussaint.

The interesting tie between All saints day and Halloween is hidden in its name in plain sight.

Halloween or Hallowe’en, as it used to be known, means “Saints’ evening” and comes from a Scottish term for All Hallows’ Eve: the evening before All Hallows’ Day, also known as All saints day.

In other words, Halloween is the eve of all Saints day.

The people of Lorraine, a historic region in northeast France which borders Belgium, Luxembourg and Germany, claim that the original Halloween is ROMMELBOOTZEN (German name), Nuit des betteraves grimaçantes”(French name), which means the night of the grimacing beets.

True to its name, on October 31, the eve of all saints day, the children of Lorraine carve scary faces out of sugar beets and place them on window seals, wells, walls of cemeteries or crossroads to scare passersby.

You can celebrate with other families at the château Saint Sixte which hosts the Grimacing beet festival for several days where kids and families can partake in workshops, shows and tales at nightfall.

In all the years we’ve lived in France, we’ve never had more than one, maybe two groups of children come knocking. Most years, we get none.

I’ve heard that there are towns in France where Halloween and trick-or-treating have taken off, but these are the exception and not the rule, so don’t load up on bags of candy unless you want to eat most of the candy yourself.

The kids who go trick-or-treating generally go business to business, popping in and out to ask shop owners for candy. We’ve done this in Montpellier, and it was so much fun.

You might also be interested in this Why The French Hate Halloween and How To Celebrate It Anyways!

5-In general, Halloween is seen as a purely commercial event

I’ve trolled French forums, asked my friends and my friends’ friends what’s was the one thing they disliked the most about Halloween. Invariably, most of them, even those who enjoy Halloween, agreed that Halloween is too commercial. They don’t like the fact that retailers use Halloween to boost their sales and attract more customers.

Below are some screenshots of conversations from some people in France talking about Halloween.

6- Costumes are typically scary, not cute.

Unlike in North America, where anything goes, costumes in France are typically scary and ghoulish, like vampires, ghosts and skeletons.

Costumes of the less scary genre like kitty’s, princesses and ninja turtles are more of a carnival costume when kids get dressed up and parade around the school in their costumes around February and March.

7- Halloween is too grotesque, morbid and gory.

Cut off hands, fake blood, tombs and death. Some French parents, like this one, find Halloween decorations and costumes too shocking, scary and grotesque, especially for little kids.  They just don’t understand what’s so fun about Halloween.

Blake and I were lucky enough to make some fantastic friends in France who invited us to their Halloween parties. It’s not commonplace, but it does happen. At the parties, we attended we were the only non-French people.

I was surprised to see that there were very few kids at the parties we attended.

If you hate candy corn as I hate it, then you’ll be happy to learn that candy corn does NOT exist in France. If you really must buy some, you’ll have to order it online at the “American Market” in France. Popular candies in France are Haribou, Tagada and Carambar.

Despite all the anti-sentiment around Halloween in France, you can find plenty of things to do and people to celebrate it with.

We’ve lucked out and had some great fun on Halloween in France thanks to friends who love celebrating, but if you don’t have friends yet or don’t know anyone, you can wing it as we used to when we first arrived in France and celebrate at home.

You could also throw your own Halloween party or take the kids to local businesses and retail shops, who usually hand out candy to kids on Halloween. That’s what we do in Montpellier.

Or you could do nothing.