French Supermarket Candy You Can Buy Online As Gifts Or Souvenirs 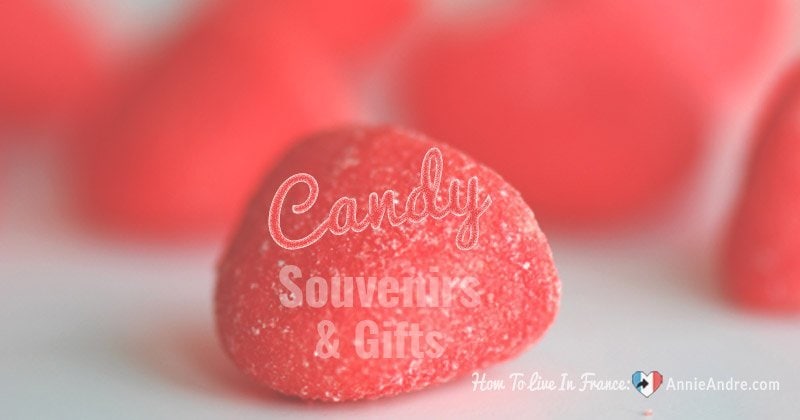 Whether you’re looking for an inexpensive souvenir, a compact gift that fits in your luggage, or you want to buy someone something sweet from France- French candy is a sweet treat that checks all the boxes and please just about anyone. Here are 7 French candy favourites you can buy online or at a French supermarket.

Buying souvenirs and gifts from your travels can be tricky. Even buying a simple souvenir t-shirt involves knowing what size is for who and which colour and design are best.  Touristy gifts can be fun reminders of your travels, but let’s face it, once the novelty of that miniature or shot glass wears off, those souvenirs often get thrown out or left at the bottom of the junk drawer.

Sweet Treats have mass appeal, but…..

Sweet French treats and confections make thoughtful gifts you can give to just about anybody, and I guarantee they won’t get wasted or thrown out. But not all French treats are well suited for transport in your luggage. Chocolate melts and French macaroons are delicate.

Supermarket candy from France is a great souvenir and gift.

Pre-packaged candy found in grocery stores are 1) compact, 2) have mass appeal, 3) are relatively durable and easily transportable thanks to its packaging 4) but best of all, candy from the grocery store is affordable so you can get a little something for everyone without breaking the bank.

I know what you’re thinking.

Supermarket candy isn’t sophisticated or gift-worthy. Candy from another country, even if only from a foreign grocery store, has appeal. Even the average French person purchases candy at supermarkets.

If you’re not travelling to France but still like the idea of giving candy to that French loving Francophile in your life, you can also buy most of these online and have them shipped directly to your home. I’ve included links to where you can buy them online.

Of the hundreds of types of candy available in the candy aisle of French food stores, I’ve listed 7 French favourites and cult classics. Not all originate from France. However, they are extremely popular.

If you can bring back just one type of candy from France, LET IT BE a bag of one of the most well-known and recognized candy in France: Strawberry flavoured “TAGADA.”

Say the word “TAGADA” in France, and 9 out of 10 people will instantly know you are referring to the cute little red dome-shaped candy called “Les Tagada”- a candy created in 1969 by Haribo.

Over 35% of annual candy sales in France are spent on Haribo candy. Just walk down the candy aisle of any grocery store, and you’ll always see a multitude of candy produced by Haribo to choose from. It’s no wonder roughly 38 million pieces of candy made by Haribo are consumed EACH DAY in France.

Although the Haribo brand is not a French brand, a French division oversees candy produced and sold in France. That division created Tagada specifically for the French market and French taste buds. Even the name “TAGADA” is geared towards the French market-which is an old French expression that implies joy or happiness-similar to WHOPP-DEE-DOO or YIP-PEEEEEE.

Supposedly, the candy got its iconic name when a Haribo sales manager in France went to a cabaret and heard a song with the phrase “Youpla Boum tagada tsoin tsoin.” The song that he heard may have been a song by French singer Maurice Chevalier called prosper.

If you’re still not convinced that Tagada is popular in France, you have only to look at all the books and websites that reference this cult candy. You’ll also find hundreds of dessert recipes online, which call Tagada candy as one of the ingredients.

photo and recipe for this strawberry Tagada cake (in French)

Slightly smaller than a ping-pong ball and shaped like a cute little red dome, it has a soft marshmallow interior dusted in strawberry flavoured sugar on the outside.  Tagada can be found in other countries such as Germany, but they taste slightly different. For instance, the Tagada sold in Germany is not as soft as those sold in France because the French prefer them softer.  Many brands have tried to create their own version of “les Fraises Tagada,” but nothing compares to the original.

Sure, you can buy gummi bears anywhere, but If you want the original gummi bear, you need to try Haribo Golden Bears.

Make sure you tell the story of how the gummy bear was invented.

Back In 1920, Hans Riegel, a German entrepreneur, founded the confectionary company HARIBO in Bonn, Germany. 2 years later, he invented the first gummy bear, which he called the “dancing bear.” His inspiration for the now-iconic bear shape came to him while watching the trained bears he saw at festivals, annual markets and other celebrations in 19th century Germany.  Later, when he began mass-producing the fruit gum bears for Europe, he made them smaller and re-branded them as Golden Bears, known in France as “L’Ours D’Or.”

HARIBO is a contraction of the inventors name and city  HAns RIegel BOnn.

A tasty gummi bear, what else? There are several fruit flavours, including green apple, lemon, orange, raspberry, strawberry and pineapple.

Chamallows is a marshmallow candy produced by Haribo for the French market, and like Tagada, it’s a candy that every French person knows by sight and name. The name Chamallows is so ingrained in the French culture that it is used interchangeably with the French word for marshmallow, which is “gimauve”- similar to how you might use the brand name “ Kleenex” instead of the word tissue.

Chamallows are sold in packages mixed with two colours- pink and white, which taste the same. They are very similar to the classic white marshmallow found throughout North America, but they don’t quite taste the same. They’re also less airy, in my opinion.

This is the only candy on the list, which runs the risk of getting squished, so you may want to throw this in your carry-on bag or purse.

These chewy jewels contain no gelatin and stick to your teeth as you chew them. There is a  lot of debate over whether the colours correspond to the taste. Some say red is strawberry, while others say all the colours taste the same. According to the Haribo website, yes, there are different flavours; however, they don’t correspond to the colours. In other words, you could get a red one that tastes like strawberry or a blue one that tastes like strawberry. Each one is supposed to be a surprise.

These are fairly rugged candies and travel well.

Some people hate them, but if you or someone you know loves licorice, then these tiny multicoloured pill-shaped candies called “CarenSac” might be the perfect thing to bring back from France.  They come in packages with a mixture of blue, white, red and green and have a chewy licorice centre (not as chewy as gummy bears). They have a semi-hard sugar-coated exterior making them durable enough to survive a trip in your luggage.

Car en Sac candy is a rugged candy that will travel well.

Carambar, short for “CARAMel en BARre,” is a cult classic in France. It’s one of those nostalgic candies that make many French people reminisce about their childhood. Created in 1954 by Delespaul-Havez, a French company located in Lille, France. Rumour has it that the first Carambar was created by accident when one of the factory machines malfunctioned.

Every 8 Centimetres chewy bar comes individually wrapped in a yellow and red wrapper and is famous for its jokes written on the inside wrapper. There are even whole websites dedicated to Carambar jokes: blague.carambar.free.fr

Although Carambar looks a lot like a Tootsie Roll, Carmbars’ have a more caramel and chocolate taste to them and softer consistency, in my opinion.

These come in small bags of 320 grams. The candy itself is pretty hard and won’t melt in hot temperatures but will get slightly soft.

If you’re not into marshmallows, don’t like gummy or chewy candy, then a hard candy like a lollipop might be your best bet. One brand that stands out is Chupa Chups, which happens to be the world leader in lollipops. Chupa Chups are instantly recognizable by its famous daisy logo created by none other than Salvador Dali. Dali even suggested to Enric Bernat, the Spanish inventor of the Chupa Chups loli, to print the logo on top of the wrapper so that it was always visible.

The name of the brand comes from the Spanish verb chupar, meaning “to suck.”

More than four billion Chupa Chups are produced every year in more than 50 flavours tailored to the tastes of more than 160 countries.

Try the crème brulé, banana milk and caramel flavours, but orange and apple are by far the most popular.

Supermarkets are relatively easy to find in France, making them a convenient place to buy some pretty interesting but inexpensive gifts, even at the last minute. Here are the names of a few of the major supermarkets.

Monoprix [pronounced: MOE-NO-PREE] (Monoprix are usually located in cities or bigger towns. They will carry food and household items, including clothing.)

Carrefour [pronounced: CAR-FOOR] (Carrefour is a huge supermarket chain with tiny stores to gigantic supermarket stores that sell everything from clothes, paint and school supplies, electronics and more).

LIDL [pronounced: LI-DUHL]  (This is a kind of discount grocery store and are usually pretty small.