What is a brasserie, bistro, café & what’s the Difference? A France dining guide 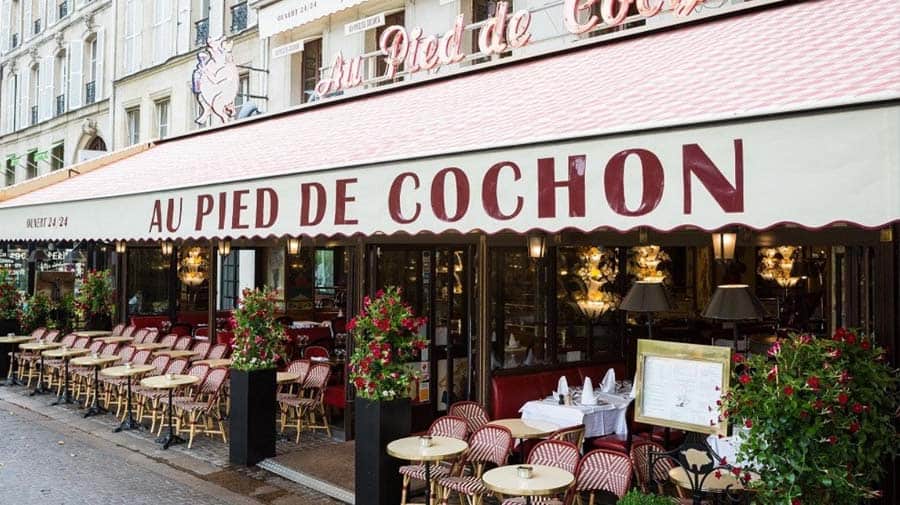 tags: food, food facts, French culture, French food, restaurants
35 shares
What’s a brasserie, and what’s the difference between a brasserie, café and a French bistro? Here’s everything you need to know about these classic French restaurants, including a bit of history, the origins of their names and some example dishes you might find at each type of restaurant, which I pulled directly off of Parisian menus.

What’s the difference between a café, bistro and brasserie in France?

From coq au vin and French onion soup to steak tartare and steak Frites, France is known for many things but wouldn’t be the same without experiencing simple but classic French dishes.

You don’t need to go to an expensive French restaurant that serves 5-course meals to experience French cooking in France. Brasseries, bistros, cafes and even some bars serve up classic French dishes in a casual setting at more affordable prices.

Bistros, brasseries and cafés are an integral part of French history, culture and dining in France. They’re also places where you can experience one aspect of the art of French living.

Historically, bistros, brasseries and cafés have different origins and were very different in terms of atmosphere, service and type of food served, but things have become a bit intertwined over time.

Here’s everything you need to know about these classic French restaurants, including a bit of history, the origins of their names and some example dishes you might find in each type of restaurant, which I pulled directly off of Parisian menus.

What is a Café?

What is a café?

In France, true cafés, also called “débit de boisson” (drinking establishment) which are places where you go mainly to hang out, and grab a drink, whether it be a coffee or a glass of wine and maybe eat something light at the bar, in the dining room or on the terrace. The food served in cafés are traditionally very casual, simple dishes like a sandwhich, a croque monsieur or maybe a salad. Cafés are also popular places to meet friends for an aperitif before heading off to dinner.

Is café a French word?

The French word for coffee (café) is borrowed from the Turkish word “kahve,” which makes sense since coffee houses probably originated in turkey around the 16th century.

A brief history of Coffee houses in France

Café-style restaurants in France and Europe are a direct result of coffee which didn’t show up in France until 1644 via Marseille, thanks to a French merchant and traveller named Pierre de la Roque.

It took nearly 30 more years for the first French coffee shop to open at Place Saint-Germain in 1672 by a man named Pasqua or Pascal Rosée.

Francesco Frenchified his name to François Procope Cuto and renamed Pascal’s coffee shop “Le Procope” café in 1686 on Rue des Fosses Saint-Germainin which became a huge success and still is to this day.

What many people don’t realize is that Francesco’s café “le Procope” was also a gelateria (shop that sells gelato), the first of its kind in France.

Francesco didn’t invent gelato, but he was the first to mix a dash of salt to make the ice melt more slowly and stay cooler, as well as the first to and sugar instead of honey. Francesco was also the first to sell gelato (and sorbet) to the public, which were originally food for the rich because ice and salt were expensive and only made for the wealthy in their private residences.

By the late 1800s, gelatos were extremely popular throughout Europe, and cafés were a Parisian staple.

Other cafeés like Les Deux Magots and Café Flores popped up and became popular hubs for famous writers, philosophers, players, and revolutionaries to gather, debate and exchange ideas while drinking the fashionable and exotic coffee drink.

Why eat at a French cafe?

When you want to meet someone someplace very casual for a drink or grab a bite to eat and don’t mind eating something less refined, go to a café.

Many old establishments like “Le Procope” that started off as a café became bistros or brasseries.

Procopes’ menu is much more extensive now and is classified as a brasserie, which is how it’s described on their website.

Just remember that café food will usually be very plain, more like snack food and sandwiches.

Did you know that the Lumière brothers, French inventors of cinema and movie posters held their first commercial public film screening on December 28, 1895, in the basement of the Grand Café in a room called “Le Salon Indien du Grand Café?” The Grand café where the screening took place at 14 Boulevard des Capucines is long gone. It’s now the location of Hotel Scribe which opened a restaurant called “Café Lumière”, in memory of its rich history.

Typical things you can order on a café menu

The food at a café is usually very simple, not gastronomic and often not even French.

Here are some example dishes you might see at a cafe which I pulled from a few Parisian cafe menus.

What is a Bistro restaurant?

Think of a bistro ( “bistrot”) as a casual, unpretentious neighbourhood family restaurant / café / bar where you can have a drink and eat traditional time-tested French recipes at affordable prices. The food served is usually simple, home style or rustic meals like grandma’s cooking (a French grandma.)

A bistro is usually only open during lunch and dinner, but some are open for breakfast.

Each restaurant is different, but mealtimes in France generally start at noon for lunch and from 7:30 pm for dinner.

The first Bistros of France

While bistro restaurants take various forms today and can be found all over France, they were initially small, unpretentious Parisian cafés where you could have a quick drink and order some simple and inexpensive food served quickly.

Many of these first bistros were run by people who moved from their impoverished rural lands in France and settled in Paris to open small businesses.

Parisians called these transplants from rural regions “les bougnats” from “charbouniat” in the Auvergnat dialect, which meant coal burners (charbonniers in French).

Bistros run by Bougnat were easily recognizable thanks to their decorations: Zinc bar countertops and tables covered in paper or red and white checkered gingham tablecloths called Vichy in French.

Some also sold coal and wood along with food, wine and coffee.

What does bistro mean, and where does the word come from?

The term bistro first showed up in the French language around 1880.

The etymology of the word “bistro” is not known and is widely debated, but there is a lot of speculation.

A popular but improbable theory is that the word bistro is a loan word from the Russian word “bystro,” which means “fast” or “quick.” The hypothesis is that Russian soldiers who occupied Paris around 1814 shouted the Russian words (quick, quick) to get their drinks faster. But this hypothesis doesn’t seem possible since the first written records for the word bistro in French don’t show up until nearly 70 years after the Russian occupation of Paris.

Another more likely theory is that the word “bistro” comes from regional words from dialects spoken throughout France.

Here are a few theories on the origins of the word bistro.

Whatever its origins, today, the word bistro or Bistrot is part of everyday language in France. More recently, a new type of upscale bistro has emerged, spawning some new vocabulary, such as bistronomy and bistronomique.

Bistronomie (Bistronomy) and bistronomique are contractions of the words bistro + gastronomy, which the Larousse dictionary defines as fine dining in a casual atmosphere served on small plates at affordable Bistrot prices.

What type of food can you order at a French bistro?

Bistro and brasseries have a lot in common which explains why they’re often confused.

Here are some dishes you might find on a French bistro restaurant menu.

I pulled these dish names from actual bistro menus located throughout Paris.

If you’re looking for some Paris bistro suggestions, here are a few notable ones that you may want to try.

What is a Brasserie?/ What does Brasserie mean?

The etymology of Brasserie: “Brasserie” is the French word for “Brewerie,” which comes from the French verb ” brasser,” to brew. The ending suffix “erie” designates an art, type of job or type of business. Similar French words with the “erie” suffix that designates a place of business include boulangerie, Confisserie, Chocoloterie,épicerie,poisonnerie, etc.

What is a brasserie?
As the name suggests, a brasserie was initially a place where beer was brewed. The dishes served at a brasserie reflected the local cuisine of Alsacian immigrants who were some of the first to open up brasseries who brought their beer brewing customs and local cuisine such as Choucroute (sauerkraut) to France. Some brasseries have kept up the tradition of beer brewing, but these days the focus is on wine. The food link between Alsace is also less evident.

Like a French bistro, modern brasseries specialize in classic French favourites but brasseries are much larger with a set menu rather than a seasonal one. Many of the more well known Parisian brasseries are very old historical sites with much of the decor maintained from the belle epoque. Prices tend to be more expensive than a bistro but the service is usually very fast. Food is often hit or miss. Some brasseries have sub par food but remain popular thanks to their art deco decor.

Brasseries are typically open seven days a week and serve food all day from either 8 am to midnight or noon to midnight. A select few are open 24 hours a day.

These are some examples of food you might find in a French bistro. I pulled them from actual menus of some famous Parisian brasserie restaurants.

Among the thousands of restaurants in Paris, a handful of brasseries have a special place in the hearts of the French. Here are some of the more famous ones you may want to check out.

Today, brasseries, bistros and cafés have established themselves in France and French culture, each with its own unique characteristics, atmosphere and food, which is why it’s important to understand the differences before you decide where to eat.