17 Iconic Amelie Movie Locations You Can Visit Including The Café 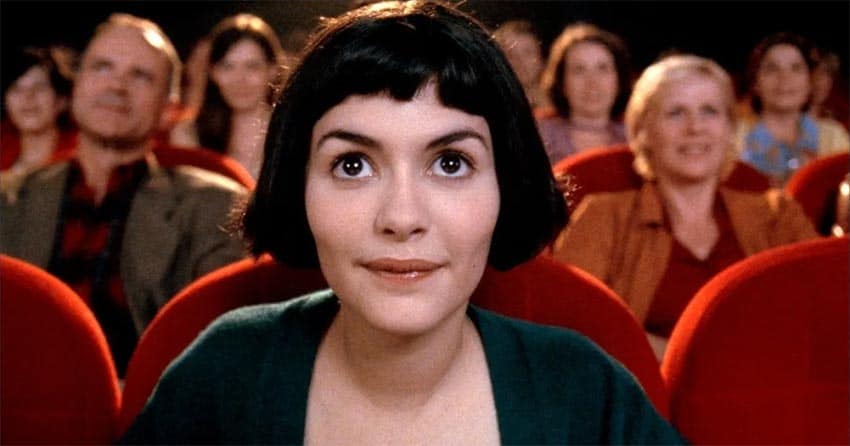 If you’re an adoring fan of Amélie “the movie” who would like to follow in Amelie’s eccentric footsteps, here are 17 delightful Paris filming locations including the popular Cafe from Amelie.

“Amélie” is an emblematic French film from 2001 that has become a worldwide cult favourite.

As one of the highest-grossing French-language films of all time, it’s also one of a handful of French films that have crossed international borders to achieve international success.

Audrey Tautou  not only looks like Audrey Hepburn, who her parents named her after, she is often compared to Hepburn.

Amelie is a lonely and painfully shy French girl with a big heart who secretly orchestrates adorable plots to make the lives of people around her better.

She runs into a young man named Nino Quincampoix, who collects photos left behind at photo booths and falls head over heels for him.

The backdrop for this cinematic sensation is mainly set in Montmartre, a famous Parisian district located on a large hill in Paris’s 18th arrondissement that has a charming village atmosphere.

If you’re an adoring fangirl or fanboy who would like to follow in Amelie’s eccentric Parisian footsteps, you can visit and experience many of the locations throughout Paris where the movie was filmed.

I’ve listed 17 filming locations you can visit, starting with the bistro / café of Amélie where she worked.

If the map does not work, you can see it here.

Head over to the Café des Deux Moulins, the real life cafe from Amelie where she worked as a waitress in the movie.

It’s located on Rue Lepic, one of the most famous and liveliest streets in the Montmartre district of Paris.

The café des 2 Moulins (French for 2 windmills café) is named after the only two windmills still standing nearby in the Montmartre.

When Montmartre was still a small countryside village on a hill, it was dotted with no less than 13 windmills.

The two nearby windmills are:

Much of the original décor in Amelie’s cafe is the same as it was in the movie except the Amelie movie posters and paraphernalia scattered throughout the cafe for adoring fans of her movie.

And over by the bathrooms, there is a small Amelie shrine with trinkets and gnomes.

Piggybacking off the popularity of the film, the owners added some new dishes inspired and named after Amélie, and fans are eating them up.

A Beef hamburger topped with , Tomato, and truffle.

A three course meal which includes: a French onion soup, beef bourguignon with mashed potatoes and vanilla creme brulé (Amélie’s favourite thing is to crack the caramelized sugar with her spoon).

A dessert plate that includes: “Amélie’s fabulous Crème Brulée,” fresh raspberries, a choice of Viennese chocolate pastry or a cafe, and a polaroid portrait of yourself at the cafe.

Pop into the Marché De La Butte, called Monsieur Collignon’s in the movie.

This is the épicerie (small food store) located around the corner from Amélie’s apartment.

In the movie, Amélie would do her food shopping here and sometimes stop to listen to neighbourhood gossip.

Amélie sometimes likes to go to Studio 28 on Fridays to watch a good foreign film.

Studio 28 is the oldest cinema in Paris, named after the date it was founded (1928). Many of the movies here are artsy foreign films with French subtitles.

From time to time, they have a showing of the movie Amélie which is surreal to watch because there’s a scene in the movie of Amelie watching a movie at studio 28.

You might be interested in reading: Unusual and Off The Beaten Path Paris Spots (That are NOT The Eiffel Tower)

For less than a few Euros, you can take a swim in the beautifully renovated 1920s Piscine des Amiraux, a municipal swimming pool that’s also an art deco masterpiece.

This is the same pool shown at the beginning of the film when Amélie’s father exits the pool and is annoyed that his swimming trunks are sticking to his body.

In one of the opening scenes, Amélie, as a child, goes to church Notre Dame with her mother, lights a candle and prays for a little brother.

As the mother and daughter exit église Notre Dame, a tourist from Quebec plummets down from the church tower, instantly killing Amelie’s mother.

Take a walk along the 4.5 km long Canal Saint-Marin where Amélie famously skipps some stones into the canal water.

Audry Tautou, who plays Amélie, didn’t know how to skip stones, so it was added in with special effects.

It’s common to see people sitting along the water’s edge, hanging out, eating, chatting and just being French.

Dominique had hidden the metal box as a boy when he lived in Amélie’s apartment decades earlier.

You can pop into Le Verre à Pied for a glass of wine or stick around for lunch and order the “plat du jour.”

The bar is located on rue Mouffetard, or «la Mouffe», as locals affectionately call it; A but hopping 605-meter cobblestone street, loved by tourists and Parisians for its old-world charm.

It’s also one of the oldest streets in Paris, dating back to the Romans who used it on the route to and from Italy.

Before the Romans it was a well worn Neolithic path or thoroughfare.

Today rue Mouffetard is lined with cafes, French shops and a permanent open market which dates back to the 1200s. This is the same market that inspired Julia Child.

Hemingway even lived on this street and described rue Mouffetard as “that wonderful narrow, crowded market street which led into the Place Contrescarpe” in his novel A Moveable Feast.

After returning Mr. Bretodeau’s childhood box of memorabilia, Amélie leaves the Verre à pied wine bar feeling wonderful and walks to the Pont des Arts. This walk would have taken her about 30 minutes by foot.

In this scene, she walks on the bridge towards the Louvre located at the end of the this pedestrian bridge.

The above image of Pont des arts is facing the “Institut of France,” a French Academy of Sciences.

Pont des Arts, also known as “love lock bridge,” has a reputation as the bridge of romance.

Lovers used to be able to attach padlocks engraved with their names to the railing before throwing the keys in the Seine river.

In 2015, the city removed all the padlocks and eventually placed glass panels over the railings to prevent people from adding their love locks.

The extra weight from the locks was causing structural damage to the bridge, which was never meant to support so much weight.

This bridge was also in “Sex In the city” when Mr. Big says, “Carrie, you’re the one.”

Walk along rue Lamarck toward the Lamarck-Caulaincourt Metro station.

This is the scene where Amélie does her second act of kindness after she returned the box of trinkets she found in her apartment to its owner.

Amélie sees a blind man trying unsuccessfully to cross the street and quickly scoops him up.

She crosses the street and continues walking  arm-in-arm with him as she rattles off a vividly detailed guided tour of all the sites they pass along rue Lamarck.

My favourite part of this walk is when Amélie describes the baby in a pram in front of the butcher staring at a dog who is staring roasting chicken.

The blind man has a certain look of amazement as he pictures all the sites she explains.

Then just as they arrive in front of the Lamarck-Caulaincourt metro station, she tells the old man she must leave him, unlinks their arms and jauntily runs up the right side of the double staircases above the metro onto Rue de la Fontaine du But.

Hop on a train at Gare du Nord, the main train station in Paris and the busiest railway station in Europe.

In the movie, Amélie occasionally takes the train to visit her father in Enghien-Les-Bains, where she grew up.

This metro has been the backdrop for many movies, including The Bourne Identity (2002)

In the movie, the name of the shop was changed to Palace Video.

This is the scene where Amélie enters the sex shop in hopes of returning the photobook to Nin, but he’s not there.

A woman working in the sex shop tells Amelie that Nino is working his other job at the Foire du trône.

Amelie leaves and continues her search for Nino.

After Amélie leaves the sex shop, she must have jumped on the train to get to the Foire du trone (Faire of the throne).

This traveling fair is the largest and oldest funfair in France and possibly Europe dating back over 1000 years.

Amélie tries to see Nino at the fair, but a woman at the ticket booth tells her that Amelia must buy a ticket, which she does.

Amélie gets on the haunted house ride, and a man dressed in a skeleton costume jumps on Amelie’s car making haunted sounds. Is it Nino? Maybe!

Anyone can visit this huge travelling fair from April to the end of May at Bois de Vincennes, one of the largest public parks in the city.

This is the scene where Amélie calls Nino on the public phone booth next to the carrousel in the Saint-Pierre square at the bottom of the Sacré Coeur. The telephone booth is no longer there.

This brief exchange on the phone at Sacre Coeur and at the Cafe des 2 Moulins are the only two times that Amélie and Nino exchange a dialogue during the course of the entire film.

The Sacré-Cœur Basilica is perched at the highest part of Montmarte hill district and visible from a distance like the . Its construction was completed in 1914 and is considered the main tourist attraction of the Montmartre district.

Fun fact: for Saint Patrick’s day, the Sacré Coeur is sometimes lit up with green lights.

The film begins on September 3rd, 1973, at exactly 6:28 pm when a blue fly lands on rue Saint-Vincent, an old cobblestoned street, and gets run over by a car.

Rue Saint-Vincent is again featured at the end of the film, as Amélie holds tightly onto Nino on the back of his moped as they happily ride down the road into the sunset, and then the credits roll.