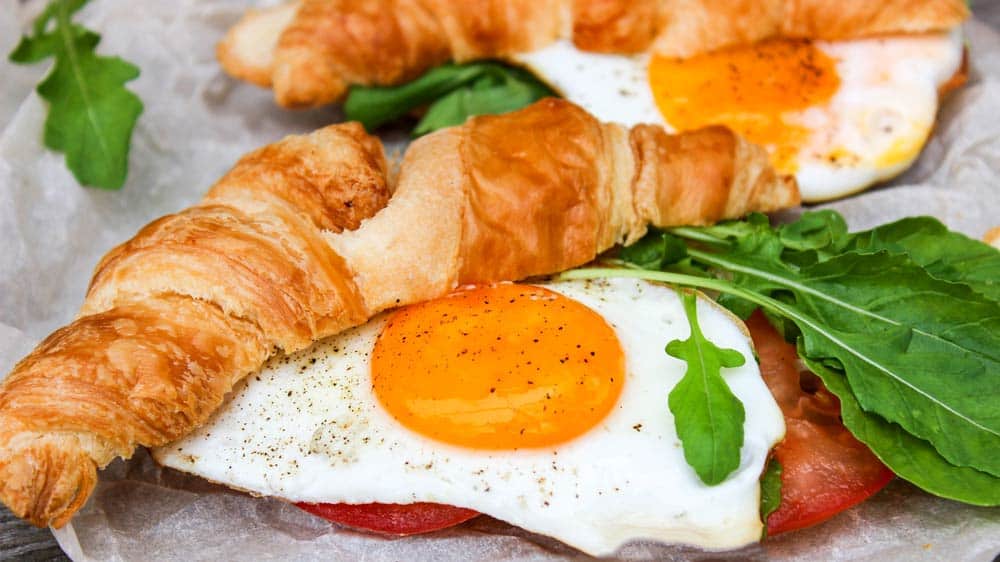 If you’re from the US, Canada, or the UK, when you think of Fried eggs, especially sunny-side-up eggs (fried on one side with an unbroken yolk on the other), the first thing that probably comes to mind is breakfast. But in many countries such as France, Sunny side up eggs are more of a lunch and dinner item served as part of another dish. Here’s everything you need to know about ordering dishes containing fried eggs in France.

Eggs are not a typical breakfast food in France.

If you’re new here, I’ve lived in France for over a decade.

I can’t tell you how many times I’ve been out with a friend for breakfast and seen tourists sit down only to discover that there are no eggs or bacon on the breakfast menu.

If this surprises you, you’re not alone.

A classic French breakfast isn’t savoury. You won’t find cheese or eggs at a French breakfast table. And bacon for breakfast, well, that’s viewed as a very American thing in France and bangers a very British thing.

French breakfasts tend to be sweet

A French breakfast is what you might call a continental breakfast; buttered baguette, toasted bread with a spread such as jam or Nutella. Cereal, yogurt, fruits, pastries, and viennoiseries from local bakeries such as croissants or au chocolate.

Contrary to popular belief, croissants are not a daily breakfast food. in France. They are more of a weekend breakfast or a quick bite to eat on the way to work.

Omelettes and , which you might think belong in the breakfast category, are usually reserved for lunch or dinner with a vinaigrette salad.

That’s not to say that you can’t find a restaurant that serves fried eggs for breakfast. It’s just that these restaurants that serve eggs usually cater to tourists, especially in hotels.

There are also specialty restaurants that cater to an Anglo-Saxon breakfast, specifically American or British-style breakfast.

For instance, in Montpellier, there are about 5 or 6 restaurants that I know of that serve up non-traditional French breakfast and brunch items such as pancakes, bacon, bangers, fried tomatoes, and eggs.

One of my favourite breakfast restaurants in Montpellier is Bonobo, where you’ll find a mix of French people with plenty of foreigners from all over the world dying to get their savoury non-French breakfast. It’s trendy and usually very crowded. Get there early because people form a line before the restaurant even opens.

Fried eggs only come one way in France: Sunny side up.

Depending on who you talk to, ordering fried eggs for breakfast can be a complicated affair in the US and Canada, where you can specify the level of doneness and how you want your eggs fried.

The American and Canadian way to order fried eggs:

In France, things are much simpler because you never specify how you want your egg fried. It’s usually understood that the egg is served sunny side up with a runny yolk.

In French-speaking Quebec, there is a term for an egg cooked over easy “oeuf tourné” translated as flipped egg or turned egg.

In France, however, there is no official word like “over medium eggs” or “over easy eggs.” Many French people aren’t even aware that it’s normal to order eggs cooked on both sides in other countries.

If you really want to order an egg in french, cooked “over easy” or “over medium”, you’ll have to say something like:

Sunny-side-up eggs are usually a component of a dish for lunch or dinner.

As I already mentioned, eggs, even sunny-side eggs, are not a breakfast food in France however, it is served for lunch or dinner and incorporated into many dishes.

French dishes that can come with a sunny-side-up egg:

Crêpe bretonne: aka Galette bretonn with sunny side up egg.

Here are a few examples of lunch and dinner dishes in France that come with a sunny-side-up egg as part of the dish.

Pizza is very popular in France; some come with a sunny-side-up egg in the middle.

Although not a French dish, Moroccan shakshuka is fairly popular and comes with several sunny-side-up eggs served on top of the dish.

The French word for egg(s) is harder to say than you think.

The French word for egg is “œuf” /Uhff/. The “œ” sound can be challenging for some people who are not native French speakers because it can change from one word to the next.

Another thing that leads to miss pronouncing the French word for eggs is the vowels in the word oeuf “OE” which are usually combined into a single symbol “œ” called “e dans l’o /Uh-dahn-low/ (e in the o.)

If you’re familiar with the international phonetic alphabet, “œ” ( /ø/ or /œ/ ) is said with an open mid-front rounded vowel sound which doesn’t exist in some languages such as English.

What are sunny side eggs called in French?

Sunny side-up eggs go by two different names in France, which are synonyms according to DAF (Dictionnaire de l’Académie française), the official dictionary of the French language.

These two French terms for a sunny side-up egg are sometimes used interchangeably in France, but technically there is a difference in how they are finished, which has been lost over time.

More on this in a bit.

The plural version would be “Des oeufs au plat.”

Although these two terms are used interchangeably, technically, there is a difference, but most home cooks don’t differentiate between the two.

Mirror eggs or “oeuf miroir” is cooked to the point where the white membrane over the runny yolk is slightly more cooked than oeuf au plat, which gives it a shiny opalescent effect, like a , hence the name eggs.

If you see a dish on a menu in France that says it’s served with an egg, and it’s not specified how it’s cooked, it’s usually assumed that the egg is sunny side up.

How to cook perfect sunny-side-up eggs the French way:

I consulted quite a few old and new French cookbooks and watched over a dozen videos by professional French chefs about cooking the perfect sunny-side-up egg.

As the old saying goes, there’s more than one way to crack an egg, but there was plenty of overlap between the different methods.

Cooking sunny-side-up eggs in the oven

Some chefs cook their eggs in a porcelain dish and finish in the oven.

Below is a video in French where you can see how it’s done.

You might wonder why fried eggs in France are only served sunny side up, and the answer is simple. It’s because most French cooks consider a cooked yolk to be overcooked and bland.

You might be interested in reading: How to order rare, medium rare and well-done steak in French!