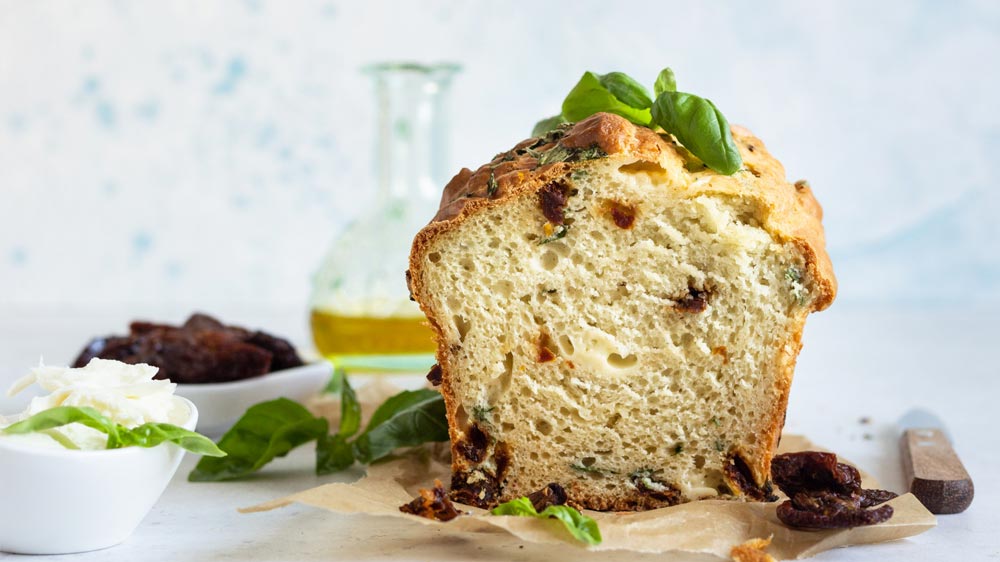 Here’s the low down about salty cake, a popular French appetizer you can make out of almost anything including leftovers. I’ve also included the base recipe and some ideas to inspire your next creation.

How to pronounce cake salé

Cake Salé, is pronounced /Cake Sah-Lay/ and not “cake sale.” The acute accent over the “É” changes the way the letter “e” is pronounced exactly like in my last name “André”.

The literal translation for cake salé is “salty cake,” but idiomatically, it’s the equivalent of saying “savoury cake” in English.

What is a French savoury cake, “Cake Salé”?

Cake salé is not a dessert cake.

It’s a savoury French loaf cake recipe made with a variety of herbs, and savoury filling ingredients.

Once you know how to make the base recipe for the batter, you can MacGyver it into hundreds of different recipes. It’s easily converted to a vegan savoury cake or savoury muffins.

The Batter for salty cake

The batter for savoury French cake or cake salé is similar to making a sweet cake but with salty and savoury ingredients (not sweet), such as olives, ham, bacon bits, grated cheese, sun-dried tomatoes, etc.

The cake batter is then poured into a long rectangular loaf pan, and baked in the oven.

It’s sometimes referred to as a “Savoury Loaf Cake” or “Savoury Quick bread” in the English-speaking world.

This simple and versatile French dish is a mainstay in France for picnics and as an appetizer but it’s also great as a main dish accompanied by a salad and a glass of wine.

In France it often makes an appearance with pre-dinner drinks during French apero get-togethers because it’s easy to make at home, delicious, and can be eaten warm or at room temperature.

It’s often sold premade in the freezer or section of French grocery stores. Below is a photo of cake salé at a French supermarket in the freezer section marketed as Cake aperitif (chèvre tomate) tomato and .

Why is it called cake salé in French?

If you speak a little French, you know that the French word for cake is “Gateaux ” So shouldn’t it be called “gateaux salé” in French?

The word “Cake” is a borrowed word in the French language (middle English from the Norse word “Kaka).

In French, the term “CAKE” has more to do with its loaf pan shape than the ingredients.

Anything called a “cake” in French cooking means it’s probably rectangular-shaped because it was cooked in a rectangular bread pan or loaf pan (Moule à cake or Moule à ).

This isn’t unusual in the world of cooking. There are quite a few dishes named after the cooking vessel in which they are cooked or shape of the food.

What’s the difference between gateau salé and cake salé?

A “Gateaux salé,” which literally means “salty cake,” is also a savoury cake but it can be any shape: round, square, triangle or a rectangle like a cake salé. And there are plenty of recipes out there to prove it.

Just remember gateaux salé can be any shape and cake salé is a type of gateau salé that is always rectangular in shape.

If this sounds confusing, imagine how confusing the term “crab cake” is to a French person. It’s not a cake, nor is it rectangular in shape. In French Crab cake is called a “Galette de Crabe”.

Remember how I said in the cooking world, many dishes can be named after their shape?

Well, a Galette is an example of a dish taking on the name of its shape. In French cooking “galette” is a term attached to many foods that have a round flat shape, whether it be a hamburger patty, king cake, tortilla or savoury crepes.

If you were to take the same cake salé recipe and pour the batter into a cupcake pan, or muffin tray, the result would be savoury muffins called “muffin salé ” but I’ve heard the term “mini cake salé” also used in French.

And if you poured the savoury french cake batter into a mug and threw it in the microwave then you would have a savoury mug cake called a “mug cake salé”.

What Are The Ingredients In A French Cake Salé?

One of the best things about salty French cake is that you only need to know how to make the basic cake salé recipe batter using simple ingredients you probably already have in your kitchen pantry.

Once you’ve made the basic cake salé batter, you can jazz it up by mixing whatever you want into the cake mix. I mean absolutely anything.

From sundried tomatoes, feta and olives to chorizo, dates, and . The combination of recipes using meat, vegetables, cheese, and herbs are endless.

If you’re a vegetarian, you can easily make a vegetarian cake salé by simply not adding any meat to the batter.

And if you’re vegan, it’s easy to convert the basic cake salé recipe into a vegan cake salé by replacing the dairy products with vegan options.

As for the eggs, some French vegan cake salé recipes use an egg replacement others don’t.

Once you have your base cake salé batter which will look a lot like pancake batter, it’s time to start adding whatever fillings you like.

You don’t even need a recipe. You can MacGyver a unique recipe out of whatever you have in your fridge and pantry but recipes are nice to have for inspiration.

Cake salé is excellent for using up leftovers

Because you can put whatever you want into your savoury french cake recipe, it’s a great way to use up any leftovers loitering in your .

Need to finish half that onion and bell pepper or leftover ham? Chop it up and throw it in your cake salé batter.

Obviously, this list is far from exhaustive, but here is a picklist of ingredients which you can combine in a number of ways to come up with very unique cake salé recipes.

What Are Some Common French Savoury Cake Recipes?

There are literally hundreds of different French savoury cake recipes you can make but here are some popular recipes.

If you’re looking for vegetarian options, here are a few ideas.

On to the basic recipe now.

CONGRATULATIONS! Your base cake salé batter is ready for your fillings.

FILLINGS & INGREDIENTS YOU CAN ADD

Time to add cheese, herbs, spices and other ingredients of your choosing.

NOTE* nutritional information listed below is for the base recipe without cheese and fillings.

Disclaimer: Nutrition information provided for recipes on are estimate and for guidance only. I am not a dietician or nutritionist. It is the responsibility of the reader to review all listed recipe ingredients to ensure that none of the ingredients may cause a potential adverse reaction

If you love French cuisine and casseroles, you’ll want to try some of these classic French potato casserole dishes.  Everyone loves a good casserole, especially a END_OF_DOCUMENT_TOKEN_TO_BE_REPLACED

If you’re from the US, Canada, or the UK, when you think of Fried eggs, especially sunny-side-up eggs (fried on one side with an unbroken yolk END_OF_DOCUMENT_TOKEN_TO_BE_REPLACED

“Let them eat cake” is one of history’s most famous quotes attributed to Marie-Antoinette, the queen of France during the French revolution. But did she really END_OF_DOCUMENT_TOKEN_TO_BE_REPLACED