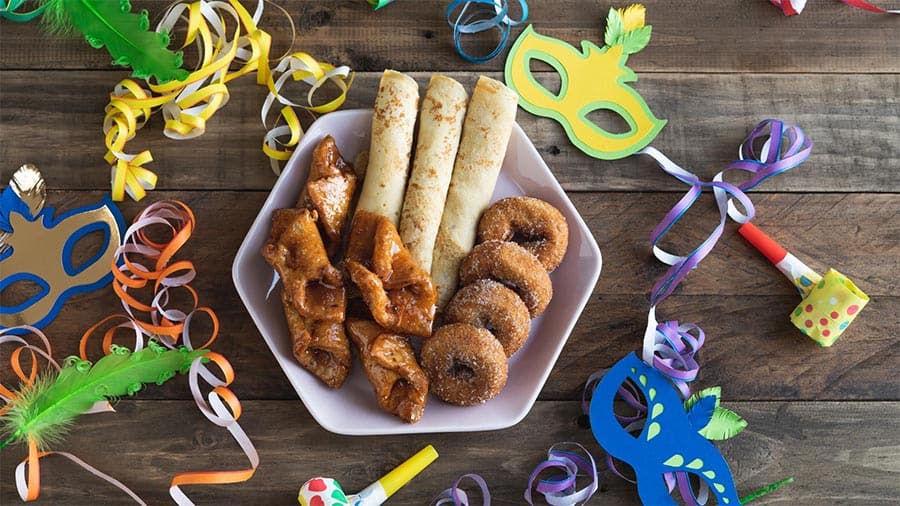 Are you looking for some savoury or sweet recipe ideas for mardi gras? Let’s take a look at some of the most popular mardi gras foods in France associated with the carnival season.

What are some of the most popular mardi gras foods in France?

Carnival is a popular festival celebrated in over 50 different countries. From local traditions to traditional carnival and mardi gras foods, no two festivals are alike and can differ from country to country and town to town within the same region.

Fat Tuesday is the literal translation from French “Mardi Gras.”

You might be interested in reading: Mardi Gras (Fat Tuesday) And The Carnival Season In France Explained

Why is it called mardi gras?

The Carnival season officially begins on January 6th (Epiphany) and ends on a Tuesday (Fat Tuesday) the day before lent, exactly 47 days before Easter. In other words, Mardi Gras is just one single day within the carnival season.

Originally in France, the last 7 days of the carnival season leading up to mardi gras used to be called “The week of 7 days of fat” (Semaine des sept jours gras), or “carnal days” (jours channels.)

There’s a perfectly simple reason why this pre-lent Tuesday is called Fat Tuesday, and it has to do with food.

Eating fatty food before lent is a holdover from ancient times when Christians emptied their cupboards and binged on rich fatty foods before fasting for lent. Certain foods such as milk, butter, lard, eggs, sugar, meat, and cheese were strictly forbidden foods during lent until Easter in the spring.

Fritters, pancakes and fried dough such as donuts (les beignets) were commonly eaten to use up these ingredients and Tuesday was the last day to live it up eating these fatty foods.

Through this tradition, certain dishes and foods have become staples during the carnival season and for mardi gras in France.

Classic American donuts are often referred to as “les beignets américains” in France.

Although now considered a French pastry, the beignet is thought to have connections to an ancient Roman pastry called “Scriblita,” Latin for tart or cake. In the 2nd century BC, Cato the Elder, a senator and historian, described “scriblita” as lumps of moist leavened dough fried in boiling animal fat into random shapes.

Somewhere down the line, the name changed from Scriblita to Bigne, which means bump or lump and then Beigne and beignet in the middle ages.

French settlers brought the newly-named French beignets with them when they migrated to Canada’s eastern coast in the 17th century to a region called Acadia. Eventually, les Beignets made their way down to Louisiana when the French were expelled and are extremely popular in the French quarter, especially during Mardi Gras. The beignet became even became the official state doughnut of Louisiana in the 1980s.

French beignet come in a variety of shapes and sizes depending on the region.

Some regions of France prefer soft fluffy beignet, while others prefer a crispier beignet with no leavening agent. Typical ingredients vary by region but, for the most part, can include some or all of the following: Rhum, lemon zest, eggs, butter, salt, flour, sugar or fleur d’oranger (orange blossom.)

The French beignet shape can also differ by region. Sometimes French beignet from different regions look and taste the same but go by different names. Similar to how au chocolate are called chocolatine in the south of France.

And sometimes beignet look entirely different but taste the same.

Here are a few of the more famous names and versions of French donuts found throughout France.

One of the most well-known types of beignet in France is called bugne, pronounced a little like /Boonyh/.

Most Lyonnaises bugnes are thick and soft with a texture like a brioche bread. But some bugnes are crispier and crunchier.

Twisted pastry, sometimes fried in duck fat. These are popular in the southwest regions of France.

Les oreillettes, pronounced /O-Ray-Yet/ are a provençal specialty. They have a square shape and a crunchy, almost cracker-like quality.

Below is a photo of my daughter eating une oreillette at her school carnival celebration in Montpellier. They were offered to the kids as treats.

In the Poitou region of France, beignets are called Tourtisseaux, and they seem to be the same exact shape and recipe as the beignet from Nantes.

The beignets in Corsica are called Fritelles. They are balls of dough deep-fried in oil and look almost identical to the Italian Fritelles and Fritoles.

Corsica is an island in the Mediterranean Sea, 105 miles (170 km) from southern France and 56 miles (90 km) from northwestern Italy. Before the 18th century, it was part of Italy and ruled by the Republic of Genoa.

In Provence, Nice and Marseille, these are often sold as Churros. Below is a picture I took on my last trip home to Montreal of a food truck selling chichis, aka churros.

In Savoy, beignets are called rissoles and are made similar to how you might make a ravioli. They’re often filled with confiture such as a pear compote (similar to apple sauce but made with pears).

In the Champagne region.

This is a partial list of all the different names of les beignets in France.

Another popular food to eat during the carnival celebration in France is king cake.

Traditionally, since about the 14th century, people in France ate king cake on the first day of the Carnival season on January sixth for 3 Kings Day ( feast of Epiphany). In modern France, king cake is available in French bakeries, pastry shops and supermarkets as early as mid-December through the end of January.

Each king cake comes with a golden paper crown, and small plastic or porcelain toy is baked into the cake. The person who gets the slice of king cake with the hidden figurine is king or queen for the day and gets to wear the crown.

Free printable paper crown template to colour, decorate and make your own. Perfect for Mardi Gras, Carnival or a Paris themed birthday party.

There are several types of King cakes sold in France, but here are the two most popular:

By far, the most popular type of king cake in France is the Galette des Rois. I’ve also heard some people call this galettes Parisienne.

Galette des rois is very simple to make. It’s made by taking two puff pastries (pâte feuilleté) and filling the center with a sweet frangipane (almond cream filling.). Then the edges of the puff pastry or pinched off, and everything is baked in the oven.

The term “Galette” confuses some people who don’t speak French because the word galette can be used in cooking directions to describe any flat round shape like the hamburger shape or the tortilla shape. It also describes pastries and cakes with a flat round shape, such as the galette des rois and French crepes made with buckwheat.

In France, are eaten all year round, especially during carnival and on Chandeleur, the 40th day of the Epiphany season when baby Jesus was presented to the Temple. Just hold the maple syrup because that’s not really a thing in France.

Eating some form of crepe/pancake in February has very ancient roots, and it seems that every country has its own version. From Fluffy pancakes in the US, Canada and the UK to the Spongy Ethiopian flatbread made with sour fermented teff flour.

Did you know that pancakes/crepes are descendants of the early Neolithic flatbreads baked on hot stones? Researchers found pancakes in the stomach of Otzi the Iceman, dating back 5,300 years.

In ancient Greece, Romans ate “Alita Dolcia,” a flatbread type of pancake made from wheat flour olive oil sprinkled with sesame and honey.

Romans also ate “Ova Sfongia Ex Lacte,” spongy eggs with milk, which looks a lot like a crepe without flour.

Savoury in France are usually made with buckwheat and are topped with anything from cheese, a fried egg, mushrooms or ham. These savoury buckwheat are called les galettes, Bretonnes or just galettes.

You might be interested in reading: Fascinating Facts About French Crepes You Didn’t Know But Wish You Did

Another popular Mardi Gras food in France and during the carnival season are waffles “les gaufres.”

Although most might give the Belgians credit for creating this tasty treat, the waffle started in Greece as the obelios”, a round flat crispy wafer similar to a crunchy ice cream cone. It was made using a double-sided iron with a long handle. A technique the Romans adopted and spread throughout their empire.

Around the year 1200, the Greek obelios became the French “oublie,” which then spread throughout northwestern continental Europe and could come in many patterns from family crests to biblical scenes.

Around the 16th and 17th centuries, Groote Wafelen from the Belgian Een Antwerps kookboek published the first recipe using leavening (beer yeast), which gave birth to over 16 varieties of fluffy Belgian waffles that the world has grown to love.

You won’t find any Jambalaya or cajun shrimp po’boy dishes in France. These are strictly mardi gras recipes popular in Louisiana.

However, you will find Fritter recipes that you can cook up for Mardi gras.

The word for French donuts is “beignet,” but it can also refer to savoury foods such as les beignets aux courgettes (Zucchini fritters.) In this case, beignet means fritters.

Here are a few examples.