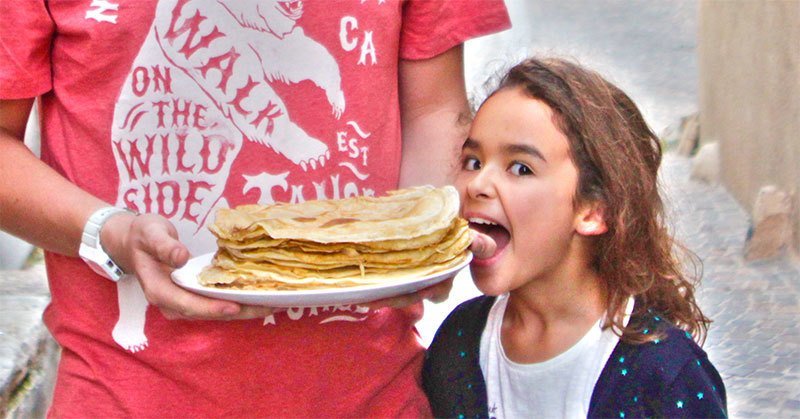 Although are eaten all year round in France, it’s tradition to eat to celebrate “La Chandeleur” on February 2nd, precisely 40 days after Christmas which happens to be Groundhog day in certain parts of the world. But why do French people eat on this day?

February 2nd could be considered National crepe day in France. Did you know that September 26th is “pancake day” in the US?

While the US and Canada are waiting for the groundhog to poke its cute little head out of its hole on groundhog day, French people  eat to celebrate “la Chandeleur” which has deep religious roots.

Very few countries celebrate “La Chandeleur”,  known as Candlemas in English, by eating except Belgians and maybe some French Canadians. I remember my aunt flipping a crepe while holding a coin a few times but it wasn’t a regular thing for us.

Can you imagine— a whole day dedicated to eating the equivalent of French pancakes?

It just doesn’t get any more cliché than that.

Do you know how to pronounce Crêpe in French?”

What Does La Chandeleur Mean?

“La Chandeleur” comes from the French word chandelle (candle) and refers to the custom when clergymen would bless candles before lighting and distributing them to people for the mass.

The light of the candle is symbolic of Christ as “the light of the world” which explains why Chandeleur is also known as “Fête de la Lumière” (celebration of the light), not to be confused with Lyon’s “Fête des lumière” in December which means festival of lights.

This celebration of lights was to commemorate three occasions in the Christian religion.

Why do French people eat during Candlemas?

Despite its religious roots, “La Chandeleur” is now somewhat of a non-secular tradition in France so everyone, no matter what their religion can partake in eating .

It’s all about superstitions

You’d be hard-pressed to find a French person who can tell you why they eat for Chandeleur but the custom can be traced back to superstitions that date back to the Roman times.

It was believed if you made , it would bring you good fortune and a good wheat harvest. But the crepe had to be made a special way.

You might be interested in reading:
Fascinating Facts About French Crepes You Didn’t Know But Wish You Did Read More

The tradition of flipping a crepe while holding a gold coin

You were supposed to flip the first crepe in a pan with your right hand while holding a gold coin (preferably a gold Louis coin) in your left hand. The gold coin was then rolled into the crepe and placed in the master’s room on top of a cabinet until the following year.

The following year, the coin was removed from the year-old crepe and given to the first poor person they met to ensure prosperity until the next chandeleur.  Makes me think of good karma.

Peasants also believed that by eating , they were ensuring a healthy wheat harvest for the coming year.

Today, candlelight processions and other rites no longer exist but the tradition of eating on Chandeleur remains and although extremely rare, some people still do flip the first Chandeleur crepe holding a coin.

You might be interested in reading about another holiday called L’épiphane where you eat a fluffy brioche cake and can become king for a day.

The interesting link between Chandeleur and groundhog day

Now that you know that national crepe day is actually called “la Chandeleur” in French and also “Fête de la Lumière”, you’re probably wondering what all this has to do with groundhog day?

For starters, both Chandeleur and groundhog day fall on the 2nd of February, but they have much more in common than just the same date.

The groundhog tradition shares some of the same weather folklore or beliefs are associated with Candlemas Day and the days of early Christians in Europe.

For instance, here is an English song which talks about the weather which by now you’ve figured out was important for the upcoming harvests.

If Candlemas be fair and bright,
Come, Winter, have another flight;
If Candlemas brings clouds and rain,
Go Winter, and come not again.

If the groundhog sees its shadow, this means thirty days of winter still remain and it goes back into its hole. If the groundhog DOES NOT see its shadow then spring is right around the corner. In the US and Canada, it’s a groundhog, but in many other cultures, the groundhog is replaced by another animal.

How do you eat

Crêpes are usually eaten with different kinds of toppings such as Nutella, confiture or a sprinkling of sugar but never maple syrup.

Some people also drink cider with .

But aren’t just reserved for Chandeleur in France. It’s eaten all year round usually for dinner, lunch or as a dessert but not for breakfast.

629 shares Pin Share Tweet Everyone’s heard of the romance languages, but do you know why they’re called romance languages or what’s so romantic about them? END_OF_DOCUMENT_TOKEN_TO_BE_REPLACED

Whether you’re moving to a smaller house and decluttering a lifetime of belongings, relocating to another country, or putting your stuff in storage, deciding what to END_OF_DOCUMENT_TOKEN_TO_BE_REPLACED

Knowing the weather before you travel to a foreign destination is always a good idea. How else will you know what to pack for your trip END_OF_DOCUMENT_TOKEN_TO_BE_REPLACED

CHEERS! Bottom’s up! Here’s mud in your eye! Cin-Cin! Have you ever wondered how to say cheers in French? Here are 11 ways to raise a END_OF_DOCUMENT_TOKEN_TO_BE_REPLACED