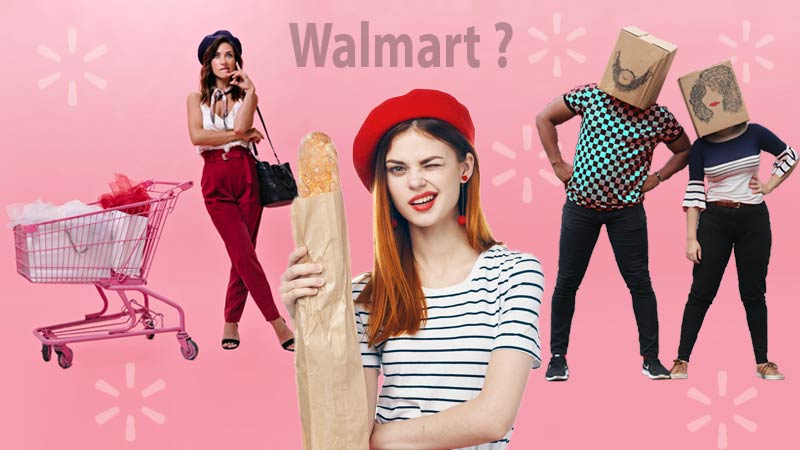 You landed here because you wanted to know if there was a French Walmart in Paris or France or something similar!

Is there a French Walmart in France?

Walmart has locations in 24 countries as of this writing, including the United States, Canada, Guatemala, Botswana, Uganda, and even China.

But there is no Walmart in France!

That doesn’t mean that there aren’t stores similar to Walmart in France in terms of products offered, amenities and size of the store. In fact, the French Walmart equivalents actually offer a lot more than Walmart.

Just don’t count on finding any of those weird Walmartians, aka cooky people of Walmart.

The French Hypermarkets Similar to Walmart

In France, there are several big-box retailers similar to Walmart that offers a variety of products to their customers, often combining a supermarket, department store and other services under one roof. They often have large car parks and are usually located on the outskirts of a city, but still easily accessible. They are generally quite large and can be anywhere between 5,000 sq .meters to 15,000 sq. meters. (55,000 sq. ft. to 165,000 sq. ft.).

Like Walmart, the French hypermarché’ is designed to be a one-stop shop where customers can find every consumer good under one roof, from groceries and clothing to technology, and more, all at competitive prices by focusing on large sales volumes to reach economies of scale.

Did the French invent the hypermarket?

It’s generally accepted that the world’s first hypermarché was opened to the public in 1963 by a French supermarket called Carrefour.

Some argue that the first hypermarket was opened in Belgium two years earlier, in 1961. It was called SuperBazar and was originally marketed as a department store. Whether or not the hypermarché is a French invention doesn’t matter because Carrefour did popularize hypermarkets around the world, not Walmart.

Sam Walton opened the first Walmart in 1962 in Rogers, Arkansas but didn’t open a Supercenter (hypermarket) until 1988 in Washington, Missouri.

Here are the French Walmart equivalents that put Walmart to shame:

Carrefour is the closest thing to a French Walmart in terms of products and selection. Carrefour is the world’s second-leading general retailer after Walmart and one of the largest and most well-known supermarket chains in Europe and France.

“Carrefour,” which means “crossroads,” was named after the fact that its first store, which opened in 1960 in the basement of the Fournier department store in Annecy, France, was located at the intersection (crossroads) of two avenues in Annecy.

It was small, only 650 sq meters (7,000 sq. ft), but it was a huge success, and three years later, In 1963, Carrefour opened its first one-stop shop, “hypermarché” at the intersection of five roads in -Genevieve-des-Bois outside Paris.

It had self-service grocery shopping at discounted prices and stocked items such as consumer electronics, auto accessories, sporting goods, and clothing.

Not all Carrefour stores are hypermarkets.

What kind of products and services can you find at a Carrefour hypermarket?

You name it; Carrefour hypermarché has it.

From fresh fruits and vegetables, seafood, meat and cheeses to clothing, outdoor furniture and back to school supplies, and so so so much more.

There are a lot of 2 for 1 and 3 for 1 deal specials usually located at the front or the side of the store. But the interiors of most Carrefour Hypermarkets are a lot more classy.

The Biggest Carrefour Hypermarket in France and Europe

The biggest Carrefour hypermarche is in Villiers-en-Bière, one hour south east of Paris. It’s also the largest hypermarché in all of Europe since an extension was added in 1986.

Difference between Carrefour in France and Walmart

Besides being a big one-stop shop that sells everything you could ever need, there are a lot of differences in the general vibe of the store and the product selection.

The following are some of the goods and services you might find at a Carrefour hypermarchés in France. Not every Carrefour has these offerings; it just depends on the store and location.

Other Hypermarkets in France (comparable to Walmart)

Most supermarket chains have a hypermarket. As of this writing, there are 2000 hypermarkets in France.

The largest Leclerc hypermarket in Gouesnou near Brest France in Brittany.

Cora’s largest hypermarket in France is located in Mundolsheim, near Strasbourg.

Casino Géant is the fifth largest hypermarket chain in the world and the fourth largest in France after Carrefour, E.Leclerc and Auchan.

Lidl is a German store, but they are located all over France and very popular for having rock bottom prices.

Pin Share Tweet Everyone’s heard of the romance languages, but do you know why they’re called romance languages or what’s so romantic about them? Here’s everything END_OF_DOCUMENT_TOKEN_TO_BE_REPLACED

Whether you’re moving to a smaller house and decluttering a lifetime of belongings, relocating to another country, or putting your stuff in storage, deciding what to END_OF_DOCUMENT_TOKEN_TO_BE_REPLACED

Knowing the weather before you travel to a foreign destination is always a good idea. How else will you know what to pack for your trip END_OF_DOCUMENT_TOKEN_TO_BE_REPLACED

CHEERS! Bottom’s up! Here’s mud in your eye! Cin-Cin! Have you ever wondered how to say cheers in French? Here are 11 ways to raise a END_OF_DOCUMENT_TOKEN_TO_BE_REPLACED