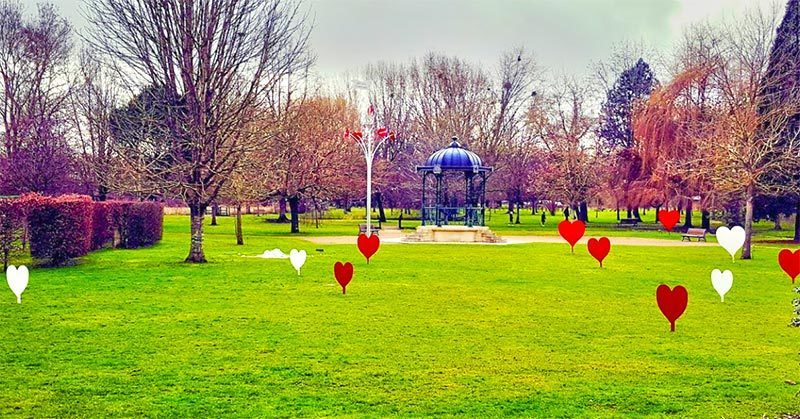 Here’s why so many Japanese and French couples are clamouring to renew their vows in this small French town that turns itself into the most kitschy, romantic, amusing place for couples in all of France.

Although Valentine’s Day is nowhere near as commercialized in France as it is in the US, Canada and Japan, one small French village in the heart of France (no pun intended) called Saint-Valentin, attracts lovers from all over France to partake in the towns main source of tourism (Saint Valentine’s day and Love). Moreover, it attracts a disproportionate amount of Japanese couples.

Before we talk about this quirky French village of love, let’s first take a look at how Valentine’s day is generally viewed and celebrated in France.

When is Valentine’s Day In France?

Valentine’s day is celebrated on the 14th of February in France, just like it’s celebrated in the US, Canada, Japan and everywhere else that celebrates this day of love.

How is Valentine’s day celebrated in France?

France is a country associated with gourmet food, iconic monuments and of course, it has Paris, considered by some to be the most romantic city in the world. A place where starry-eyed lovers can stroll along the Seine river hand-in-hand or linger for hours in a French café surrounded by the “language of love.”

With all that romance and love, you’d think Valentine’s day was a big deal in France, wouldn’t you?

The difference between Valentine’s day in France vs the US & Canada?

Although most French people see Valentine’s day as an overly commercial celebration, nearly 1 out of every 2 French persons (47%) celebrate Valentine’s day, according to a study conducted by ifop.

The French also see Halloween as a commercial holiday too, and many people hate it.

The difference is in the level at which the French celebrate Valentine’s day. It’s nowhere near the level that Americans, Canadians and Japanese celebrate. Maybe even the British too?

This means that young children in France never celebrate Valentine’s day like they do in North America. They don’t pass out Valentine’s day cards or candy to all their classmates or prepare Valentine’s Day crafts for their parents at school. It’s just not done in France.

A child might give another girl or boy a valentines gift if he or she is sweet on them, but kids giving each other Valentine’s day gifts is rare.

Tell that special someone you love them with this romantic greeting card that has over 25 common French terms of endearments and pet names.

Most French people who celebrate this day dedicated to love simply spend time together.

This might involve going to a diner, spending a romantic weekend together and maybe, just maybe, exchanging a small gift.

But it’s usually only celebrated between two people who are romantically involved. So your boyfriend, girlfriend, wife, husband, lover or someone who you are dating. You would never celebrate Valentine’s day with a friend or classmates as you do in the US and Canada.

The Village of Love: Saint – Valentin

Although Valentine’s day is generally pretty lowkey in France, the village of “SAINT-VALENTIN” (named after the patron saint himself) has taken a totally different stance on Valentine’s day by embracing this otherwise commercial holiday with open arms.

It’s basically capitalized on its namesake and turned itself into Valentine’s day marketing machine, and created a BOOMING tourist business around the day.

This minuscule town of fewer than 300 inhabitants is 260 KM south of Paris and measures 11/km2 (29/sq mi). It first capitalized on its namesake back in 1965 when it celebrated its first Valentine’s day.

The celebration wasn’t very big, and it didn’t attract many people, and that’s the way it continued for 15 years until one ambitious mayor decided to do something about the village’s anonymity.

The ambitious mayor of Saint-Valentin

Back in 1980, the then-new mayor of Saint-Valentin village, Pierre Rousseau, wanted to boost the economy and attract more visitors to the small town, all year round, not just during Valentine’s week.

He came up with the idea to create a garden which would eventually be named Lovers Garden (Jardin des Amoureux), complete with an annual festival around St. Valentine’s day.

Slowly but surely, lovers from all over France started coming to lovers garden and partaking in the Saint Valentine’s day festival. Not millions of people but enough to keep the tiny town busy.

The post office even got in on the event by creating its own loved-themed “cancellation postmark stamp” created by a famous French cartoonist, Raymond Peynet, in 1980.

Then in 1985, a few years after the mayor created lovers garden, the post office of Saint-Valentin issued a special stamp, again using the artwork from French cartoonist Raymond Peynet, best known for his series “les Amoureux de Peynet,” lovers of Peynet.

Why the Japanese are crazy about the village of Saint Valentin

It’s even earned the nickname  “Village of Love” and sometimes “The village for lovers,”

Supposedly, after the stamp was created, the tiny town of Saint-Valentin drew international attention of the Japanese who are crazy about Valentine’s day and absolutely love Raymond Peynet. He might actually be more well known in Japan than in France, which explains why there are two museums dedicated to the cartoonist in Karuizawa and Mimasaka Japan.

With the town’s new notoriety in Japan, the town became twinned (sister cities) in 1988 with a town called Sakuto-Cho (now called Mimasaka).

And finally, in 2017, Saint-Valentin became a sister city with a second Japanese city called Sagara. The mayor of Sagara explained in an interview that  “the characters that compose the name of Sagara village also means love “)

What’s the big attraction in Saint-Valentin?

There’s plenty to do and see during the annual Valentine festival, which usually lasts for three or four days from the 11th or 12th of February through the 14th, and the whole town gets involved in turning the village into a love machine.

The post office has a special stamp (mentioned above) for anyone who wants to mail a letter.

Several weeks in advance, the citizens of Saint-Valentin decorate their homes with flowers and on the Sunday closest to the 14th of February, it’s also tradition for lovers of all ages to meet in the town, stroll through the streets to the sound of bagpipes, or walk the paths of the Garden of Lovers.

Kind of like Alice in Wonderland meets valentine’s day feel. The festival is built around the main theme, which is, of course, to attract lovers who want to get married, renew their vows or propose.

During the Saint Valentin festival, there are booths installed throughout the village where visitors can do a variety of things, including watching a chocolate-making demonstration (Giving chocolate for Valentine’s day is a huge thing in Japan), buying wedding dresses, jewellery and other romantic items meant to get you in the mood.

Get a “Lovers Certificate” (certificats aux amoureus) from the mayor

The mayor gives out super kitsch but cute retro “certificats aux amoureux” at a ceremony followed by a romantic yet festive lunch and a ball in the evening.

Attend a special Sunday Mass and blessing at the Saint-Valentin church.

Get married or renew your vows in the garden gazebo.

Get married or renew your vows in the town hall.

Attach your engraved wishes to the “Tree of Hearts.”

Eat at the Star Restaurant (Au 14 FEVRIER restaurant) with a Franco-Japanese chef.

Can’t make it on Valentine’s Day?

Don’t worry if you can’t make it to Saint-Valentin village for the Valentine Festival. The village is open for “the business of love” all-year-round minus the festival, of course.

If you’re interested in visiting this quirky French town, you should know that there are not many options for lodging in the town itself; however, there are some nice venues within 25 miles.

Check out these hotels near Saint-Valentin on Booking.com

If you’re interested in contacting the town hall to get married or renew your vows, you know you want to; here is their contact information.

And finally, here are some Valentine’s Day vocabulary words.

Maybe you’re not one of those Disneyland moms (or dads). I get it, I’m not one either, but I went anyways. Here are my top ten END_OF_DOCUMENT_TOKEN_TO_BE_REPLACED

If you love French cuisine and casseroles, you’ll want to try some of these classic French potato casserole dishes.  Everyone loves a good casserole, especially a END_OF_DOCUMENT_TOKEN_TO_BE_REPLACED

Nice may be the birthplace of salad Niçoise, but there’s more to this French city than meets the eye. Here are some obscure, forgotten, little-known and END_OF_DOCUMENT_TOKEN_TO_BE_REPLACED

Plan on driving in France for the first time? Back for your annual vacation? Brush up on the French rules of the road. From basic driving rules END_OF_DOCUMENT_TOKEN_TO_BE_REPLACED