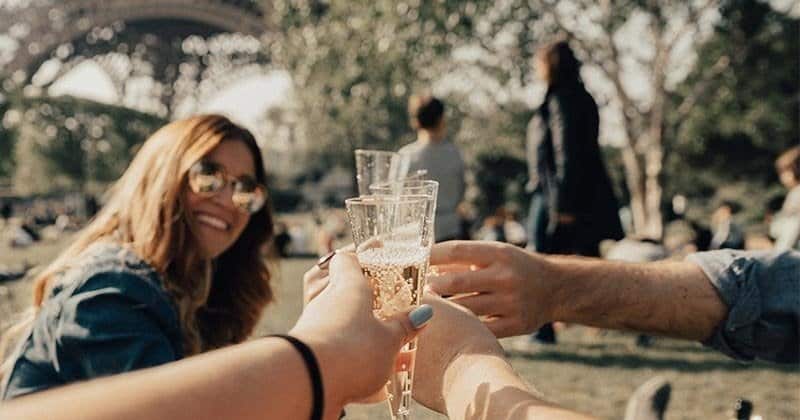 Other names you might hear that refer to New Year’s Eve are “réveillon de jour de l’an” and “Le Réveillon du Nouvel An”.

A feast and festivities with friends and family

New Year’s Eve is almost always celebrated with a feast of rich foods.

Some people like to have their New Year’s feast in a quiet environment at home with family and close friends. Others like to go gang busters and party like it’s 1999 with extravagant parties, music and dancing. Costume parties are also popular at this time of year.

People often get dressed up for New Year’s Eve but it’s not a faux pas if you don’t, it just depends on the event you are attending. There’s even a French expression “se mettre sur son 31” which means “to dress up like it’s a New Year’s Eve party”. The closest equivalent in English is “to dress to the Nines”.

Whether you have a quiet family dinner or attend a loud costume party, there is inevitably going to be a feast of food and drink.

Although the food served at any New Year’s Eve feast will vary, there are some dishes which are more common than others and might be considered New Year’s Eve staple Dishes in France such as , , crustaceans, smoked salmon, escargot and maybe even caviar if you’re host has the budget for it.

All of this rich food will of course be accompanied by Champagne or Crémant “sparkling wine” to drink during your meal and at the stroke of midnight to ring in the new year.

You can read more about the food served for New Year’s Eve by reading this article I wrote: French New Year’s Eve Food Traditions: Is It Too Weird For You?

2- New Year’s eve soirée out on the town:

If you don’t plan on throwing a New Year’s Eve house party or you’re not invited to one, there is no shortage of restaurants, hotels, bars, clubs and other special offerings on New Year’s Eve.

Most events cost money and you may be expected to dress up so check the dress code. Restaurants may have a special New Year’s Eve meal which will be more expensive than their regular menu. Bars and clubs may have special events planned also so check the local area’s list of events to see all your options.

It’s a good idea to make reservations or buy tickets in advance to secure your spot.

3- Kissing under the mistletoe

Thanks to the Druid Celts who believed mistletoe’s mystical powers brought good luck and warded off evil spirits, the French have a tradition which you probably already know about: kissing under the mistletoe “S’embrasser Sous le Gui”. Mistletoe in French, “GUI” is pronounced with a hard “G” like in the word Guide and rhymes with KEY.

Unlike many Anglo-Saxon cultures, kissing under the mistletoe is reserved for New Year’s and not Christmas.

At midnight after the countdown, everyone cries “Bonne Année”! (happy new year) and everyone (I MEAN E-V-E-R-Y-O-N-E) kisses one another (see my article on French kissing).

Certain cities in France like Paris and Strasbourg are renowned for Fireworks however for security reasons after the terrorist attacks, many planned New Year’s Eve fireworks and festivities were cancelled including the famous Paris fireworks show.

That is until the end of 2017 New Years’ festivities. So double-check just in case.

If you happen to be in Paris for New Year’s Eve and want to be at the centre of the party, the champs-Elysées is the place to be.

People start gathering at this famous avenue at around 9 pm on New Year’s Eve where you can get a great view of the which displays a sparkling light show at the stroke of midnight.

There is also a sound and light show projected onto the The Arc de Triumphe at Place Charles de Gaulle off the Champs-Elysée which starts around 11 pm on New Year’s Eve.

For the end-of-year celebrations of 2017, the light and sound show is followed by fireworks but as I mentioned before, in past years parades and fireworks were cancelled due to security reasons so be sure and check to see the planned events.

It can get pretty rowdy and crowded on the famous avenue so if you are claustrophobic or don’t like crowds, this may not be the place for you. And be wary of pickpockets.

You don’t need to be in Paris to celebrate New years. All across France in French Villages and Towns, New Year’s Eve is celebrated in a variety of ways from parades and fireworks to dances and light shows.

Check the official homepage of the city you are in to see what festivities are offered.

8- Watch The New Year’s Greetings From The President Of France On T.V.

Every year at 8 pm, the president of the French republic addresses the people of France on TV with a presidential greeting “Les vœux présidentiels”.

This speech is broadcast from the Élysée Palace-the official residence of the French President and the French equivalent of the White House.

During this presidential greeting, the president takes stock of the past year and expresses his political vision and his wishes for the future of France.

In most Anglo Saxon and Western cultures, it’s customary for people to give a New Year’s kiss someone will lead to a year of loneliness.

In France the tradition is a little more complicated because you don’t just one person, it’s tradition to “faire la bise” (cheek ) with EVERYONE at midnight.

For example, if you are at a house gathering, at the stroke of midnight on New Year’s Eve, everyone will run around saying Bonne Année while giving you a French cheek “la bise”.

Depending on the region of France, you should give anywhere from 2 to 4 alternating cheek kisses. In Provence it’s 2, In Montpellier, it’s 3 and in some parts of France, it’s 4. I know it’s complicated.

You could say that La Bise is kind of the French version of a hug but not really.

The exception for “La Bise” is if you are at a street gathering, club or bar where everyone are strangers. In this case, you could shake hands and wish people standing near you a Happy New Year and only the friends and family whom you are with.

You might be interested in reading my article on how to faire la bise and greet someone with a cheek kiss.

but only after midnight on December 31st-not before

In most English-speaking countries, you can utter the words “Happy New Year” well before the actual new year begins. In France, this isn’t so.

Only after the stroke of midnight on December 31st will French people actually wish you a Happy New Year (Bonne Année) followed by “best wishes”(Meilleurs Voeux).

The exception is the president who wishes his people a happy new year in his presidential new year’s greetings before the New Year begins at 8 pm on the 31st of December.

The French haven’t really caught on to the whole idea of sending Christmas cards. Instead, they send New Year’s greeting cards called “Les Cartes de Voeux du Nouvel An” which are usually sent on or after the first of January.

Thanks to the evolution of the internet, instead of sending a physical card, it’s not uncommon for friends to wish you a Happy New Year via text or social media sites like Facebook. Some say it’s ok while others think it’s better to send a card. The choice is yours.

New Year’s gifts called “Les étrennes” are an old tradition that goes back to the Romans.

These days, giving New Year’s gifts is about showing gratitude to the people who serve us all year long with a cash gift at New Years.

People like postal workers, firefighters, rubbish collectors, cleaners, caretakers, apartment concierge, janitors etc. How much you give depends on your generosity and ability to pay but according to Francetvinfo, you should give anywhere from 5 to 50 euros as a token of your gratitude.

Sometimes parents and grandparents will give children an “étrenne” as early as the New Year’s Eve meal.

And finally, don’t be surprised to get a knock on your door in the month of January from a Firefighter selling calendars in exchange for “Les étrennes” donations.

I just love this next French tradition which is mainly practiced in Northern France for the new year. It involves offering guests who stop by to wish you well for the new year a home-made gaufres-seches.

These cute little “gaufre seche de nouvel ans” which literally means dried new year’s waffles are sometimes called “les gaufrettes” or “les étrennes” and they have the same texture and taste as ice cream cones but with more of a vanilla taste to them.

15-Celebrations don’t end until the 6th of January:

(on the 12th day of Christmas  with La fête des Rois)

January 6th is an important day in France. It marks the last day of the holiday season and is known as épiphane and La fête des Rois.

The 12 days of Christmas is the period in Christian theology which marks the time between the birth of Christ and the coming of the Magi — the three wise men. It begins on Christmas day (December 25) through January 6 (Epiphany, sometimes called Three Kings’ Day)-the day when the three kings ”Three Wise Men” visited baby Jesus and presented their gifts to him. Remember that song “The 12 days of Christmas”?

On this day and the days leading up to the 6th of January, friends, family, schools and offices across the country share a piece of king cake with each other called “La Galette Des Rois”.

A typical King cake consists of a puff pastry case filled with frangipane sold with a paper crown. Hidden inside the filling is a small little treasure called a fève which means bean. It’s called a bean because that is what used to be put in a king cake. These days you’re more likely to find a plastic or ceramic figurine. The person who finds the hidden fèvre in their piece of cake is ‘king’ for the day and wears the paper crown.

Les galettes des Rois are easy to find at this time of year – bakeries and stores in France are filled with them.

You can read more about this Galette de Rois tradition here.

Misc Expressions associated with the new year in France