10 Cheddar Cheese Substitutes I use in France 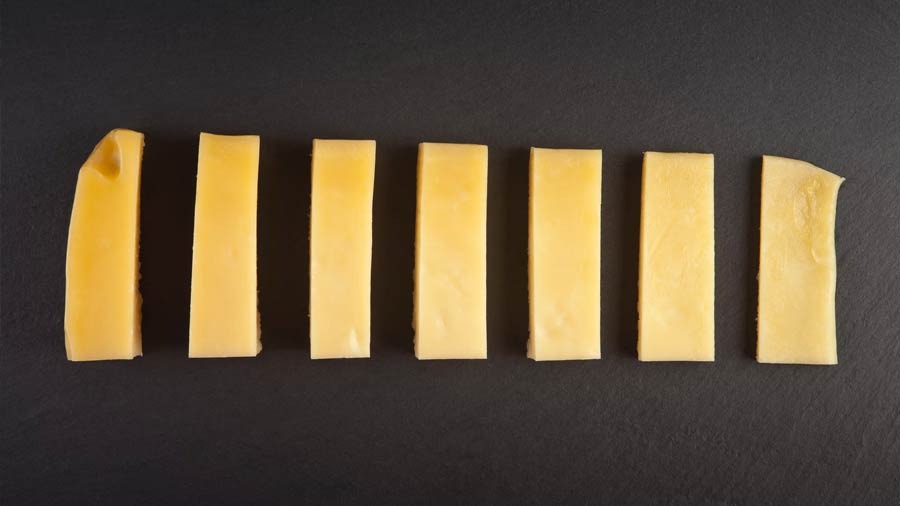 Cheddar cheese isn’t always available where I live in France, so I’ve found a few alternatives. Some are similar to Cheddar, some are not but work just as well if not better for recipes that call for Cheddar cheese.

“Cheddar Is NOT Real Cheese,”

A real statement from a good friend of mine.

Franck is my daughter’s best friend’s father. He’s your typical French guy. When I say typical, I mean he represents a good majority of the French population regarding his views.

He’s proud, almost to a fault, when it comes to French customs, culture and cuisine. I say this with the utmost respect because I’ve learned so much about French culture thanks to my French friends.

Franck believes you should have a variety of cheeses on hand to eat after meals, but Cheddar cheese is not one of them because it’s NOT A REAL CHEESE.

In other words, he believes it’s beneath French standards. Not my words.

Cheddar isn’t produced in France either. It’s imported, usually from the UK.

Some of my French friends don’t even know what Cheddar cheese tastes like, while others jokingly tell me Cheddar is “fade” or “sans goût” (tasteless), compared to , and , three of somethe most consumed cheeses in France.

It’s not their fault. Most of their experience with Cheddar cheese is limited to eating Cheddar cheese on a burger or American cheese (that flat square cheese) on a McDonald’s hamburger.

Yes, some French people do love their McDonalds. It’s easy to find a McDonald’s restaurant in France and they are always crowded.

Cheddar is also hard to find in France.

There is also a lack of cheddar in French stores and shops in France.

Walk into any decent-sized grocery store in France and head to the cheese section.

A popular brand of Cheddar cheese you might see is Wyke Cheddar.

Sometimes you can find small bags of shredded orange cheddar or packages of sliced orange Cheddar for sandwiches.

It just depends on the store and location.

I can find Cheddar at the Monoprix at one location here in Montpellier but not another. At Auchan, they never have any aged cheddar where I live, just the orange sliced cheddar cheese.

In bigger cities like Paris, you’re more likely to find a wider variety of Cheddar, but it’s still hit or miss depending on the store.

Cheddar cheese alternatives I use in France

But I digress. It is what it is, and I can’t nor do I want to change how the whole of France looks at cheese.

What I really want to talk about are the cheddar cheese substitutes you can use.

First of all, I’m not a cheese expert, and I rarely ate cheese before moving to France in 2011, except when I ate out at a fancy restaurant with my husband.

Since moving to France, I’ve sampled plenty of cheese I didn’t even know existed and loads of stinky cheeses.

With cheese being such a big part of French culture, I’ve grown a new appreciation for it and the art of cheese making, which dates back to the time of the Egyptians over 7,000 years ago in present-day Croatia.

I ALWAYS include a with a variety of hard and soft cheeses on my cheese and charcuterie boards whenever I host a dinner party or apero at my house.

About these Cheddar cheese substitutes

None of the cheddar cheese alternatives on my list taste exactly like Cheddar, and a few taste nothing like Cheddar, but they still work well for recipes which call for Cheddar.

1) (the cousin of Cheddar cheese)

Out of all the cheeses on this list, is probably the most like Cheddar. Real Cheddar. Farmhouse cheddar, aged Cheddar—the good Cheddar.

It has the same texture and meltability

is also one of the oldest cheeses in France, pre-dating (11th century) and is even considered a cousin to Cheddar cheese.

It’s believed the Romans brought to England, where it eventually became Cheddar cheese.

is a semi-hard cheese originally from in the Netherlands.

The interesting thing about is it never goes bad inside of its red wax outer shell.

Edam cheese just gets harder and harder as it ages, which is kind of weird.

BabyBel is a miniature version of cheese:

BabyBel was created by Groupe Bel, a French company in the Jura region of France.

If you’ve ever tried BabyBel, you’ve already tried cheese because the BabyBel brand of cheese is the same as cheese.

They just don’t call it for reasons unknown to me.

Mimolette is a  semi-hard French cheese with a deep orange colour and nutty tang that grates and melts similar to Cheddar.

Cheese mites are the secret to cheese.

The secret to the earthy, nutty taste and its textured crust of cheese are microscopic cheese mites that live on the surface of most aged cheeses, chowing down on the microscopic moulds that grow there.

These tiny bugs are a nuisance for most aged cheese and get gently brushed away. For cheese, mites are encouraged. YUM.

In 1675, during the French-Dutch war, Jean-Louis Colbert, the French minister who served King Louis XIV, prohibited the import of Dutch cheeses into France.

The people who lived in the northernmost region of France, which is now Belgium had strong cultural ties to Holland and loved Dutch cheeses. So they weren’t happy about the ban of Dutch cheeses, especially Exam cheese.

Colbert ordered the region’s farmers to produce their own Frenchified (better version) of cheese, and they did.

That is how cheese was born.

Gouda is named after the Dutch town.

I had had in Canada, but it tastes nothing like the aged Dutch I get here in France.

Aged Dutch is a semi-hard cheese and so much richer and flavorful than the you find in North America.

It has a rich, nutty taste with a slightly more crumbly texture than parmesan.

The interesting thing about aged Dutch is the satisfying crunchy crystal texture in every bite.

Out of all the cheddar substitutes on this list, aged is my favorite.

In some French restaurants, you’ll find is a cheese option for burgers, but so is Blue cheese.

France, the meal-kit company, featured a burger on its menu.

If you’re interested in learning about , I did a video unboxing which you can watch here.

People often get confused between French Gruyere and Emmental.

They’re often interchangeable in recipes, so I included them together.🙏

Although neither nor French Gruyere tastes anything like Cheddar, I included them on this list as Cheddar alternatives mainly because of their meltability that’s right up there with cheddar.

And they have a distinctive taste that isn’t too overpowering, which explains why there are so many classique French recipes that use these two cheese.

What’s the difference between and Gruyere cheese?

The holes in swiss type cheese are called “Eyes”.

French recipes that use Gruyere,  or both.

Croque Monsieur which is France’s version of a grilled ham and cheese sandwich topped with Bechamel sauce uses Gruyere but some recipes use too.

Do you know what “Croque Monsieur” means? Mister Crunch. Sounds better in French, doesn’t it?

Tasty has a quick video that shows you how to make a Croque using Gruyère cheese.

More French recipes that use Gruyere or (Swiss cheese).

Other cheeses that may work well as a cheddar cheese substitute include:

I encourage you to try different cheeses that have a similar consistency to Cheddar.

Cheddar cheese substitute should be meltable and semi-hard (not too soft). would not be considered hard cheese, for example.

An earthy semi-hard French cheese made from cow’s milk with a slight tang.  It has a rubbery like texture and melts extremely well.

This French white hard cheese from Occitan-Basque is made from sheep milk, and it tastes very mild.

It’s very similar to Spanish Manchego cheese which is also a sheep milk.

Ossau Iraty is a little firmer than Manchego, less nutty but it has a stronger flavour.

It’s super meltable too. I haven’t met a person yet, who doesn’t like it.  At the World Cheese Awards, Ossau Iraty won the title of the best cheese in the world twice.

Etorki is a French Basque cheese in the Pyrenees from sheep’s milk.

The recipe hasn’t changed for over 4000 years and has a sweet earthy flavour that’s very mild.

Morbier is a semi-soft French cow’s milk cheese. The interesting thing is that the center of the cheese has an ash line down the middle that looks a bit like blue cheese but tastes nothing like Blue. The more aged, the stronger the taste.

Morbier doesn’t grate very well but I have cut it up into tiny cubes and melted it in a risotto.

You don’t have to stick with the cheddar cheese substitutes on this list. These are just the ones that I can easily find in France, are economical and work well.

Maybe you’re not one of those Disneyland moms (or dads). I get it, I’m not one either, but I went anyways. Here are my top ten END_OF_DOCUMENT_TOKEN_TO_BE_REPLACED

If you love French cuisine and casseroles, you’ll want to try some of these classic French potato casserole dishes.  Everyone loves a good casserole, especially a END_OF_DOCUMENT_TOKEN_TO_BE_REPLACED

If you’re from the US, Canada, or the UK, when you think of Fried eggs, especially sunny-side-up eggs (fried on one side with an unbroken yolk END_OF_DOCUMENT_TOKEN_TO_BE_REPLACED

“Let them eat cake” is one of history’s most famous quotes attributed to Marie-Antoinette, the queen of France during the French revolution. But did she really END_OF_DOCUMENT_TOKEN_TO_BE_REPLACED