French New Years Eve Food Traditions: Is It Too Weird For You? 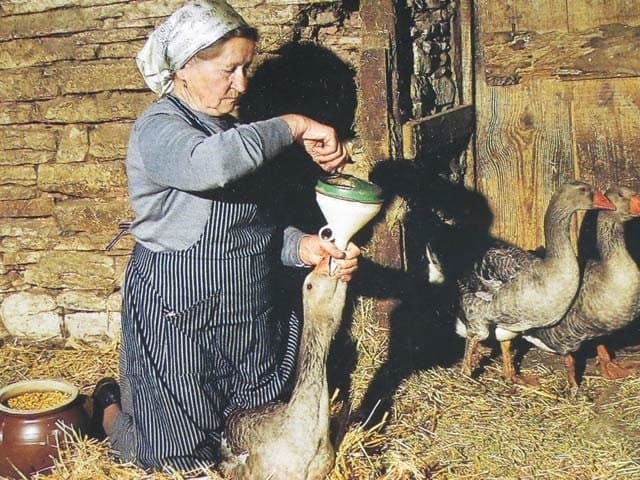 If you’re ever lucky enough to be invited to a French person’s new years eve party, here are some typical or traditional foods you can expect to see on the menu.

In France, New Year’s Eve, known as “La Saint-Sylvestre” or “réveillon du Nouvel An”, is celebrated in a variety of ways.

Some people like to organize costume parties with dancing while others like to have a quiet evening doing nothing more than snuggling up in front of the TV. Many of our friends like to throw New years eve dinner parties for friends and family to ring in the new year with a long feast called “le Reveillon” or “Dîner du Réveillon de la Saint Sylvestre”. The meal on Christmas eve is also called “le Reveillon”.

The meal and types of food served at a “le reveillon” are typically very luxurious, fancy and exceptional.

You might be interested in reading: Easy French Themed Party Ideas, Food And Decorations For Lazy Hosts

I hope you like (les huitres – “lay zueetr”),  because every year about 80 thousand tonnes of are consumed in France during the festivities of the new year. They are literally every year during the holiday season leading up to New Years’.

In the supermarket, at Christmas markets. It can also be served for holiday meals around Christmas too.


Foie Gras “fat liver” is defined by French law as the liver of a duck or goose fattened by force-feeding with a feeding tube.

Despite the controversy around the method of producing foie gras by force-feeding, which most animal activists say is torture for the animals, Foie gras is gleefully gobbled up across France all year round, especially during Christmas and New Year.

It’s even served to school-aged children for the end-of-year Christmas meal.

If you’re really lucky, your host spared no expense, and in addition to , he or she put out a platter of a variety of shellfish and crustacean over ice.

If you see prawns (Gambas) on the platter, don’t be surprised to see the heads, eyes and antennae still attached to prawns which you eat by pinching off the head and suck out the juice if you dare before eating the actual flesh.

Here’s a list of French fish and seafod in English and french.

Snails, known as escargot in France is a French delicacy rarely served outside of French cuisine except maybe in Asia. I particularly like Feuilletés-d’escargots for the New Year Meal. Think of it as a puff pastry filled with escargot and cream. You can’t even tell you are eating snails. Here is a nice recipe in French for Feuilletés d’escargots aux cèpes).

Contrary to popular belief, not all French people eat escargot but those that do eat them, usually do so around special dinners or holidays like New Year and Christmas, which explains why more than half of all escargot sales in France are sold around the end of the year.

I think the most popular is butter and parsley.

You can easily find escargot at any grocery store in France sold in cans or the frozen section. Or you could opt for a farm-fresh version by searching the internet.

If you hate raw and can’t stand smoked salmon, at least you know you’ll have the pleasure of drinking Champagne. France is after all the birthplace of Champagne.

If, by chance, you don’t see the words Champagne printed on the label of bubbly, you happen to be drinking, but instead see the words “CREMANT,” don’t worry. Crémant is sparkling wine, which is just like champagne.

If you love olives and anchovies, you’ll love Tapenade, the French Provençal name for a dish consisting of five or fewer ingredients: finely-chopped olives, capers, anchovies, olive oil, and pepper. Everything is blended together and ready to eat in minutes. Its name comes from the Provençal word for capers, tapenade.

Les verrines are appetizers or desserts made of different food components that highlight layers of colours and textures, served in a transparent bowl or glass. Similar to how a seven layer dip is prepared only so much more refined and delicate.

The variations are endless; just take a look on Pinterest and search for “Verrines.”

A terrine can either be rustic or refined and is often included on a charcuterie platter. A paté would be considered a terrine, but a terrine is not always a paté, with the difference being that pâté is usually eaten cold and contains some liver.

A terrine, on the other hand, is much more complicated and takes time to master. It can contain any combination of meats from seafood, boiled eggs, ground organs, and ground meat. Vegetables, herbs and other seasonings are then layered and packed in a loaf-shaped mould, then cooked in a water bath, cooled, turned out and sliced like a meatloaf.

Sometimes terrines are infused with aspic (gelatin) for a decorative effect that also adds an additional layer of flavour or wrapped in a puff pastry and baked “pâté en croute.”

If you can’t stand the thought of eating escargot, raw or mussels then stick to the smoked salmon dishes (Saumon Fumé) almost always served cold often as part of a Verrine, Blinis or delicate canapés with chives and crème fraîche.

Not to be confused with a Russian Blini or , a French Blini is a savoury mini pancake made with yeast (a leavened batter). It’s usually served as an appetizer at meals and parties similar to a cracker or canapé, topped with savoury garnishes such as creme fraiche and caviar or smoked salmon and cucumbers. Blinis’ are simple to make and a staple in French supermarkets.

You can make them at home and get a perfectly sized Blini with a Blini Pan. We have an electric machine that doubles as a Blini machine.

One last thing, yes, the French eat all year round, but it’s not typically a New years eve dish. However, there is one particular day, chandeleur, which happens to fall on groundhog day, where it’s the tradition to eat . If you’re interested, read Chandeleur and why it is a French tradition to eat crepes on this day.

If you’re interested in learning more about French culture, check out my post 50 Crazy Interesting Facts About France That’ll Blow Your Mind