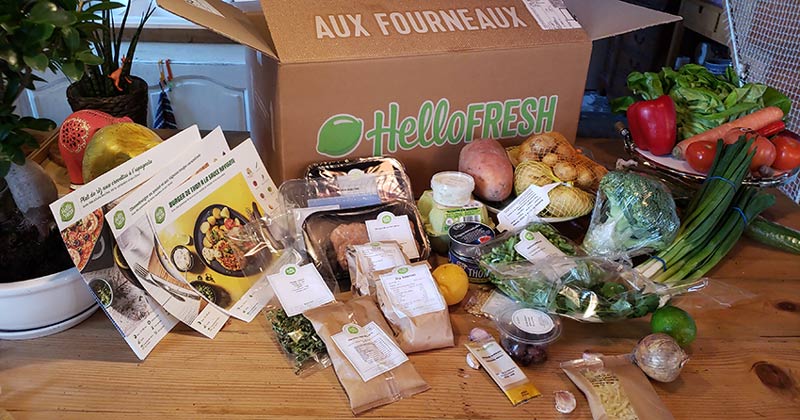 Cafe vs Bistro vs Brasserie: What’s the Difference? A guide to dining in France

What are the courses in a formal French multi course meal? 2-7 courses

Here’s my in France Review plus an unboxing video and a special discount code for up to 60 euros for new signups. I’ve also included several alternative meal delivery services from competing companies worth a try! Sorry, Blue Apron is not available in France as of yet.

Why did I choose To Use A Meal Kit Delivery Service?

It’s been over four years since I signed up for to encourage my daughter to cook meals outside her comfort zone. She was 11 at the time.

I didn’t expect to love getting recipes and the ingredients delivered to my door as much as I do because I actually love to cook from scratch and even enjoy shopping for the recipe ingredients.

Not only is it a great way to discover new recipes I might not have otherwise tried, but it’s also convenient and removes the stress of coming up with new ideas and shopping for the ingredients for those times in my life when I’m too busy or too tired.

I don’t order Hello Fresh every week. That would be too expensive.

I typically order Hello Fresh meals once a month and sometimes skip a month. It just depends on my schedule or my mood. The site makes it easy to pause and restart my subscription anytime I want.

I also signed up and tested a few other meal delivery services thinking that I might like those better.I’ve included a review of the ones I recommend below.

The benefit of signing up with multiple meal kit delivery companies is if you don’t like the recipes for that week on one site, you can order from the other sites you’ve signed up with.

I suggest you start with hello Fresh for a week, pause the deliveries and give a couple of the other delivery services on this list a try.

Be sure to watch the unboxing video I did below.

Ever since Middagsfrid.se, a Swedish company, started the first internet-based meal kit subscription delivery service in 2007, it’s become all the rage. It’s even gaining popularity in France, which is hard to believe since France is considered the world’s culinary and gourmet capital.

Are you familiar with ?

is a meal kit delivery service founded in Berlin in November of 2011.

Out of all the delivery services (in France), this is my favourite company. Their recipes are consistently good. The portions are just right, they’re quick, easy, and they always have vegetarian options.

If you’re not familiar with recipe delivery services, or you’re wondering how the French version differs from other countries, let’s go over the basics first.

A recipe meal kit delivery service such as includes everything you need to cook a quick, tasty and healthy meal delivered straight to your door without the hassle of looking up recipes or shopping for the ingredients. They combine the efforts of chefs, nutritionists and personal shoppers to deliver pre-measured ingredients from a list of weekly recipes of your choosing.

You'll receive the discount spread out over 3 orders. This is a great deal. There is no contract subscription, so you can cancel or pause at any time.

Where does deliver to in France?

If you’re in France, you can have your box of ingredients delivered to your office in Paris, your friend’s house, or anywhere else in France. I sometimes use my account to send my two sons food.

Other countries where you can subscribe to Hello Fresh

Out of all the meal delivery services on this list, Hello Fresh is the only service, that I know of, that operates in multiple countries. Fourteen so far across three continents.

Setting up your account and ordering your weekly meals is easy. In general, all delivery services work the same with slight variations.

If you’re in France, make sure you go to the French site HelloFresh.fr. If you’re located in another country, you have to use that countries version of .

You can leave these settings or change them each week.

How is delivered and packaged (in France)?

I’ve been using for almost two years, and every delivery arrives in a refrigerated truck, so you don’t have to worry about rotten or spoiled food.

I don’t have a small French refrigerator, nor do I have a big one but as you can see from the photo below, my orders can take up a lot of space. This particular order was for 5 different types of meals (5 days) and each order was for 5 people. So in total, there were 25 meals in my fridge and there is not much room for anything else. So order wisely if you have a large family and need to order for multiple days.

What’s inside each delivery?

What’s the difference between meal kit recipe services in France and other countries?

In France, a meal kit, meal box, recipe box, or whatever you want to call it has just as many French names. I’ve seen  “box repas,” “kits-recettes,” and “Pannier repas.”

The recipes in France are usually localized, meaning they cater to French people’s palettes.

In general, there are certain things you won’t find in meal kit recipe services in France.

Example of recipes in France vs in the US for the same week.

HelloFresh France does an excellent job of localizing their recipes for the French market. Here’s a side-by-side comparison of the recipes on the US site vs the France site for the same week.

I did an unboxing of our first Hello Fresh box, which you can watch in the video below.

You might be interested in Up Your Dinner Party Game With French After Dinner Drinks. Oh, La La!

In 2016 they expanded their offerings and joined the recipe subscription marketplace and now offer six new recipes each week, which you can cook at home in 30 minutes or less. Recipes are created by chef Owen Marlaud who finds his inspiration in French gastronomic tradition, his many experiences in the four corners of the world and fresh seasonal products.

My third favourite on this list is Foodette. Founded in 2015 by Olivier Tangopoulos.

Foodette is what you might call an ethical meal-kit subscription service.

They claim 80% of their fruits and vegetables are organic. They also use organic eggs from free-range chickens. Their meat is of French origin, and all have the Red Label: an official sign that guarantees you’re buying superior quality or made with more rigorous standards than food that does not have the label.

They also have kid-friendly recipes for kids.

Examples of some French recipes from Foodette:

A lot has changed since this French company began in 2012. Originally called “Cookin the world,” their focus was on food from around the world.

In 2014, they changed their name to “Qui Toque” and focus on French recipes with a healthy mix of International recipes for home delivery “les panniers recettes à domicile.”

More recently, in 2018, Carrefour ( a huge hypermarket similar to Walmart but classier) bought a significant stake in this company, probably to capitalize on their internet presence, among other things.

Examples of French recipes from QuiToque:

Type of Cuisine: Mainly French with an occasional international dish.

Rutabago was founded in 2015 by Pierre Pathy and serves up ethical recipes that focus on the quality of the ingredients, which are 100 percent organic, eco-responsible and sourced locally as much as possible. Each week four chefs consult with dietician-nutritionists to come up with five new recipes.

You can also add breakfast, fresh fruits or bread to your order for an additional fee.

Examples of French recipes from Rutabago:

Simple et Bon was the only subscription service on this list that had no international dishes. That could change in the future, but for the moment, it’s French recipes only.

Where other subscription delivery services only allow you to pick from that week’s menu of recipes, Simple et Bon enables you to select any of the recipes from their archive of 250 recipes. Like a recipe? You can have it sent to you week after week.

Another interesting feature is you can remove or add items from the list of ingredients. Already have too many onions? Just remove them from the list. Want carrots just because? Add them to your . You can also add little extras like desserts and cookies etc.

Overall, I liked their recipes. It’s a great way to discover and cook classic French recipes you might not otherwise think to cook. Their meals are a little fancier than the other ones listed above.

www.laboitapero.com is a monthly apèro delivery service you can sign up for, which sends you an assortment of curated apéro snacks and wine

You can also order everything you need for an aperitif dînatoire for two to up to 30 people at large grocery store chains such as Carrefour. Kind of like a catered apero service.

OOKIES is definitely one of a kind. Every month you receive a themed kit to make something sweet and delicious. When I say themed, I mean if it’s Easter time of the year, you’re desert kit will be Easter themed.

A monthly subscription box/kit to make the most adorable and delicious organic pastries, desserts and cookies at home with or without your kids.

I debated whether or not to put Moi Chef on this list because they don’t offer daily or weekly delivery service.

Instead, they offer one recipe box per trimester created by Michelin star chefs and other world-renowned chefs.

The idea behind this gourmet recipe subscription service is to teach you the grand chefs’ techniques so you can recreate them at home, preferably with someone.

It’s a little pricey at 79,90 € / box per trimester; however, it’s a unique idea and makes a thoughtful gift.

Pin Share Tweet CHEERS! Bottom’s up! Here’s mud in your eye! Cin-Cin! Have you ever wondered how to say cheers in French? Here are 11 ways END_OF_DOCUMENT_TOKEN_TO_BE_REPLACED

Jump to RecipeCake salé is not a dessert cake. It’s a savoury French loaf cake recipe made with a variety of herbs, spices and savoury filling END_OF_DOCUMENT_TOKEN_TO_BE_REPLACED

Cafe vs Bistro vs Brasserie: What’s the Difference? A guide to dining in France

Do you know the difference between a French café, a French bistro and a French brasserie? Choosing which type of restaurant to dine at in France END_OF_DOCUMENT_TOKEN_TO_BE_REPLACED

If you’re planning to spend time in France, you’ll need to learn your way around essential French stores, shops, services, businesses & places. From a bakery END_OF_DOCUMENT_TOKEN_TO_BE_REPLACED