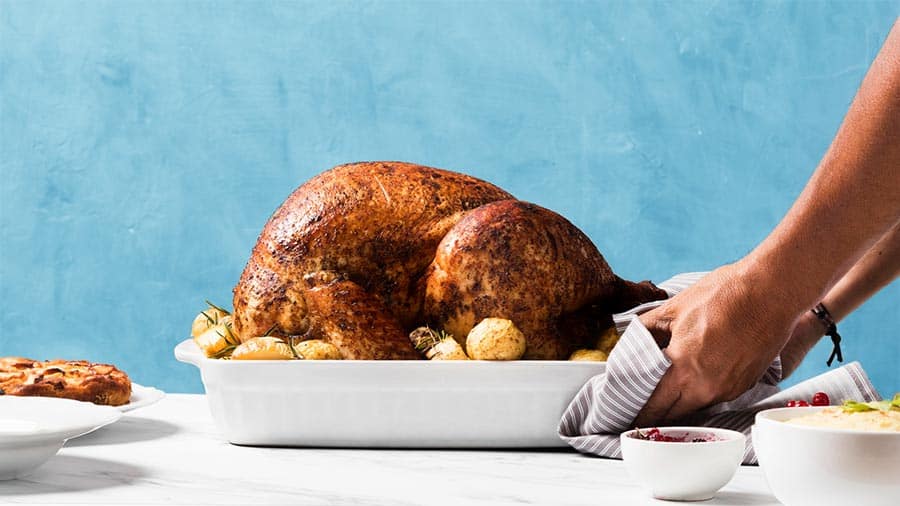 It’s true, French people eat turkey and have beaucoup de French turkey recipes to prove it. Here are 9 turkey recipes you can cook for and Christmas holiday meals. Some use typical French ingredients you may not be used to using.  Bon appétit!

Around , you won’t find 15-pound turkeys at any French grocery stores in France because is an American and a Canadian holiday.

You can, however, find plenty of turkey drumsticks, turkey deli meats and turkey breasts all year round.

It’s not until Christmas time when you begin to find whole Turkey’s in French grocery stores.

It’s called a Christmas Turkey (“Dinde de Noel” ), and it’s been a French tradition to serve a stuffed roasted turkey for Christmas since the 19th century. Before that, only the rich could afford turkey- it was still fairly rare in Europe and considered an exotic dish.

In Belgium, Brazil, France, Portugal, Romania, the province of Québec, New Orleans, and several other French-speaking places, the dinner held on the evenings before Christmas Day and New Year’s Day is called a réveillon. The name of this dinner is based on the word réveil (waking), because you have to stay awake until midnight and beyond to enjoy it.

Like North Americans, the French have their own unique way of cooking a roast turkey for the holidays, but using cranberries in the stuffing or as a side dish is not one of the ingredients the French typically use in French turkey recipes.

Instead, you’re more likely to find a rotating list of ingredients that many North Americans might not be accustomed to using in their holiday turkey recipes, such as…

Of course, French cooks use other ingredients like apples and mushrooms, but these are the ingredients I thought were the least used in North American recipes- in other words, “more French.”

You might be interested in reading Weird foods: Can you stomach New Year’s Eve in True French style?

The French tend to cook their holiday turkey a little differently too.

For instance, instead of dry roasting, a French turkey recipe might be roasted with a stock in a large roasting pan which keeps the flesh moist, juicy, and fall-apart tender.

Herbes de Provence is an essential component of French and Mediterranean cooking which is basically a mixture of herbs and . You can buy herbes de Provence premixed at most grocery stores, or you can make it yourself. The basic recipe includes these dried herbs: thyme, parsley, savory, fennel, marjoram, rosemary, tarragon, and thyme. Other recipes sometimes include or omit basil, bay leaves, chervil, sage, oregano, mint, and lavender.

Made with an aromatic blend of thyme, basil, savoury, fennel and lavender flowers. Also comes in a reusable white ceramic crock made in a small village in Drome (south of France)

The translated version of turkey stuffed with foie gras and apples is here.

The translated version of Stuffed Turkey Roasted With Escargot butter can be found here.

4) Turkey stuffed with gingerbread and

The translated version of Turkey stuffed with gingerbread and foie gras is here.

5) Turkey with chestnuts and mushrooms ( and truffles)

The translated version of Turkey with chestnuts and chanterelle mushrooms ( and truffles) is here.

The translated version of Stuffed turkey with morel mushrooms and pan-fried chestnut is here.

The translated version of this Turkey stuffed with dried apricots is here.

The translated version of the Black and white stuffed turkey recipe is here.

This recipe deserves a little explanation: What is the black and white part?

The black ingredient is Boudin Noir :

A blood sausage which gets its colour from the main ingredient, which is pigs blood)

The white ingredient is Boudin Blanc :

A white-looking sausage usually made with white meat such as ground pork-sometimes referred to in English as white pudding. It can be found in grocery stores throughout France all year round but is most popular during the holiday seasons.

Although the used to make these white sausages can vary depending on the recipe, all contain bread crumbs and cream, which are then slowly boiled in water, giving these sausages their white appearance.

Where to buy boudin blanc and boudin noir

Boudin Blanc is a traditional French sausage made with milk, chicken and a touch of cognac. All Natural" guaranteed free of antibiotics, hormones, preservatives, artificial ingredients and nitrites. Animals are fed with the purest natural feeds (No animal by-product).

Blood sausage is a traditional South of France pudding/sausage made of pork blood, beef and spices.

If you’re lucky, you might be able to find some and at your local grocery store, especially if they carry French products. If not, you can safely purchase and online since it freezes well.

For you ambitious people determined to make your own , you can make or any sausage for that matter at home if you have the proper sausage-making tools, which include a sausage stuffer and sausage casings to stuff the meat into. If you have a meat grinder, you can grind your own meat. If you already have a KitchenAid mixer, you can simply buy some Kitchenaid attachments which do everything I described above.

Epicurious has a wonderful French turkey recipe using boudin blanc (dairy-infused pork sausage, which I explained) above as a stuffing. It also shows you how to make your own at home.

Here are some Turkey and vocabulary for you.