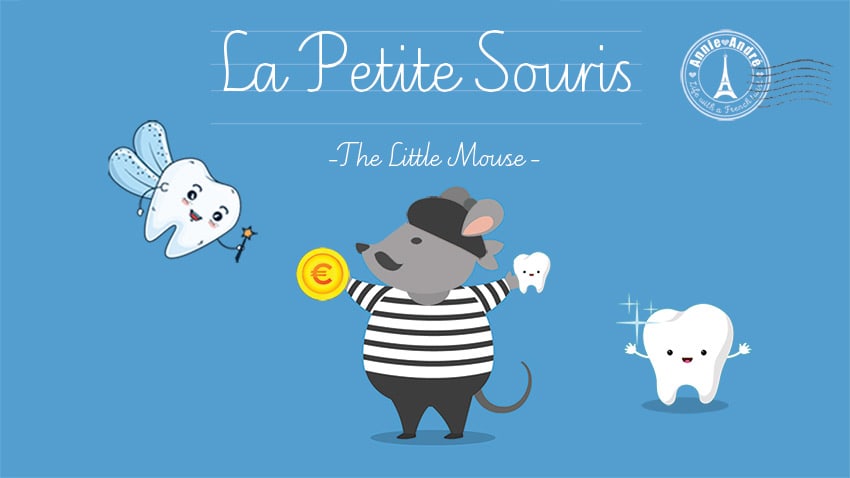 Here’s everything you need to know about the French tooth fairy in France, who’s actually a mouse called “la petite Souris,” French for “the little mouse. . You might be surprised to learn it’s loosely connected to Nordic mythology.

As my daughter Catherine pushed, wiggled, and twisted her first loose tooth in ways no tooth should ever move, I winced, and my stomach did a little backflip.

Not wanting to look mortified, I put on my most convincing expression of amazement and threw in a few “Ah là là!’s” for good measure.

When her loose baby tooth finally fell out later in the day, my daughter ran up to me and proudly exclaimed:

“My tooth fell out. I can’t wait for “The Little Mouse” to come tonight. “

The next morning, Catherine was even more excited to find a shiny two Euro coin under her pillow that the Little Mouse left in exchange for her tooth.

There’s no tooth fairy in France.

Throughout documented history, every human culture has had rituals around the disposal of a child’s lost baby tooth.

It’s a universal right of passage all children go through.

In most Anglo-Saxon and Germanic cultures, a magical tooth fairy sneaks into their bedroom and whisks their baby teeth away from under their pillow after children go to bed.  In exchange, she leaves money or a small gift.

But did you know the tooth fairy is not the most popular tooth tradition around the world?

The tooth mouse is more common than the tooth fairy:

In France and most Francophone countries, when a child loses a baby tooth,  dent de lait,” instead of the tooth fairy, children look forward to a visit from “The Little Mouse (La Petite Souris).

This tooth mouse also exists in some Spanish and Hispanic cultures under different names.

In some cultures, the tooth mouse and tooth fairy coexist.

There are other tooth traditions around the world.

Packaged in her matchbox bed, this playset contains a stuffed fairy mouse, a removable backpack that doubles as a keepsake pouch, and a blanket and pillow in coordinated colours.

Read more about the French tooth mouse in France who collects children's teeth when they fall out.

While the Tooth Fairy and tooth mouse personas are a relatively modern invention from around the 17th to 19th century, their origins are rooted in ancient myths and traditions related to Nordic mythology that evolved over time.

One of the earliest recorded references to tooth traditions in western culture was in a mythological Norse poem called Grimmismo from the Edda.

The Edda consists of the ‘Prose Edda’ and the ‘Poetic Edda which were put together from older texts during the 12th century, in Iceland.

Most of our knowledge of Norse mythology, religion, gods, elves, poetry, cosmogony, and history of Scandinavians and Proto-Germanic tribes comes from the Edda.

In verse five of the mythological Norse poem, the Scandanavian gods (Æsir) give Freyr the entire realm of the elves (Alfheim) as a gift for his first tooth.

Freyr is the main fertility god in Norse mythology who lived in the supernatural world of the Elves of light (Álfheimur.)

Did you know that J.R.R. Tolkien’s elves are originally from Scandinavia?

This part of Freyr’s mythology in the book of Edda is based on the old Norse word and medieval Scandinavian custom of tannfé or tandfé ( tooth fee or tooth payment): giving a gift to a child when they lose their first tooth.

Fé: The English cognate of Fé is “Fee”.

The old Norse word Tandfé (tooth fee) has transcended time and is now the word for the tooth fairy in most Germanic languages, with slight spelling variations.

The sound changes and different spellings in these Germanic languages over time are known as Grimm’s law.

Grimm’s law, also known as the First Germanic Sound Shift away from other branches of Indo-European language. This is the prehistoric language which all Indo European languages are descended from.

There really isn’t much difference between the tooth fairy tradition and the French tooth mouse tradition, except that one is a mouse and the other is a fairy.

In both traditions, kids leave their teeth under their pillow in hopes that there’ll be some money or a small gift left by the tooth mouse when they wake up.

Unlike Santa Claus, there is no universal image or uniform that the tooth mouse wears.

Most of the time, la petite Souris is depicted sneaking around completely naked, exchanging teeth for money.

Sometimes the little mouse wears clothes or just a shirt but is naked on the bottom.

The little mouse doesn’t have wings or special fairy dust like the tooth fairy.

Unlike the tooth fairy, la petite souris has no magical instrument or wand.

The little tooth mouse definitely has magical powers of some sort, but what exactly they are is unclear.

Glows in The Dark. Perfect kid's room decoration so the tooth fairy (or mouse) can come in and take lost tooth.

What’s the going rate for a tooth in France?

How much do you give your four, five or six-year-old child for a lost tooth?  n age when children don’t need much.

It’s an age-old question in every culture with a magical tooth tradition.

It’s like asking how much tip to give your server in France.

The answer is unique to every family.

The first tooth is the biggest deal for French families

Any time a child loses a tooth is a big deal, but the first tooth is always the biggest deal for French parents.

What does the French tooth mouse do with children’s teeth?

No one knows why the tooth mouse pays for teeth, and what it does with the teeth is a mystery: Blackmarket, necklaces, mini tooth house, to build fires, or to eat?

Some French parents tell their children that la petite Souris builds a giant white castle with the teeth she collects each night.

That’s why the teeth need to be white and solid—motivation for the children to brush their teeth.

Origins of the “The French tooth mouse”: The tooth fairy story

This is a summary of the 17th-century story The Good Little Mouse “La Bonne Petite Souris.”

The story of the Good Little Mouse is about a magical fairy who turns into a mouse to help a kidnapped queen and her infant daughter, Delicia, escape an evil king.

The evil king from “Land of Tears” captured the queen and her daughter after he defeats and kills her husband in battle.

Originally the savage king wanted to execute the queen and her child but decided to let them live so that the site’s baby could marry his equally horrible son when she came of age, but only if she grew up to be beautiful.

The king called upon a magical fairy who confirmed that the queen’s infant daughter would grow up not only beautiful but also fortunate.  s a result of this news, the evil king kept the captured queen and her infant alive with barely any food in a barren room in one of his towers.

The imprisoned queen asks the fairy, who first appears to her as a mouse, to take her daughter and raise her as her own.

The fairy mouse agrees, and the queen makes a rope and a out of straw to lower her baby to the ground.

When the king bursts into the room, he’s furious that the child is gone and drags the captured queen out of his castle and looks for the tallest tree to hang her.

The fairy disguises herself again as an invisible mouse and follows the king up the tree, and pushes him.

The king survives the fall but loses four of his teeth.  The story goes on, and eventually, the queen finds her daughter years later.

You can read the English translation of The Good Little Mouse” or the original French version of La Bonne Petite Souris here.

How this transformed into its current-day tooth mouse tradition is beyond me.  Maybe it’s also the inspiration for the tooth fairy?

If you’re not familiar with Baroness d’Aulnoy, the author of “The Good Little Mouse,” you can thank her for the term “Fairy tale.”

Baroness d’Aulnoy is best known for her short stories, “Conte de fées” (fairy tale).  n naming her short stories fairy tales, she inadvertently coined the term for the entire genre, which ironically was not meant for children originally.

How to say tooth fairy and related vocabulary in French

Here are a few vocabulary words related to the tooth fairy and the tooth mouse and a video on pronouncing them.