Meet 5 families who travelled the world full time with kids 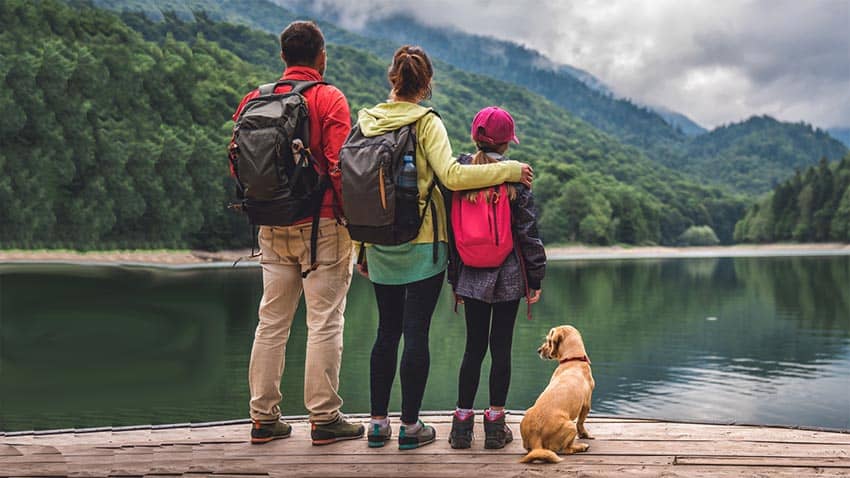 This is a collection of families who travelled the globe long-term for years. Many of these families no longer travel, but their stories are still interesting to read about. Not only did they make their dream of extended and long-term travel a reality, but they also did it despite having children and not being rich.

The Dennings are homeless on purpose. They live in a veggie-powered truck and are travelling from Alaska to Argentina with five kids in tow. That’s right, FIVE KIDS, Five.

I think you’ll be in total awe of this amazing family and what they have done so far. The Dennings don’t just want to live abroad. They want to explore the world. Since 2007, they have been determined to create a location-independent lifestyle to live the way they want to. Who doesn’t? But they have gone to great lengths to make this happen and in an exciting way.

They’ve simplified their lives to the bare essentials. No mortgage, no utilities, nothing except their truck and what they can put in it. To fund their lifestyle initially, they were living off of an income, but they lost that in 2008. Now they live off of their savings and have all they need to continue to live simply – which they are more than pleased with. However, their long-term strategy is to grow their online business which is already generating some money. They even have a few products teaching other people how to design their lifestyle as they have.

The Denning family are a special case, and it looks like there is no end in sight for their adventure. Their latest adventure is taking them across North and South American. They ‘live’ in their truck when they are travelling in-between places, but whenever they get a chance, they stop and rent a place so they can stay longer. The last time I spoke to them, they rented a house in Panajachel, Guatemala, and were there for almost two months. Before that, they spent seven weeks in Bacalar, Mexico.

The burns family says that they are a pretty average family of four who decided they weren’t happy with their lives in suburban Australia. They were trying to juggle careers, maintain a house, pay the bills, have a social life on the weekends and most importantly, still find time to be with their children. They decided they needed to do something different with their lives.

They considered a bunch of options, including career changes, selling the house and moving from the suburbs to a smaller town and even considered finding work overseas. But none of that seemed like the right answer. in late 2009 the Burns decided to take ACTION and act on a long-term fantasy of long-term with their two young children.

The Burns didn’t have a huge savings, so they opted to use their web programming skills to set up a business online. Exactly two years after they decided to take action and pursue their dream of long-term travel, they set up a house in Penang, Malaysia, to use as a base to travel the world from. They aim to spend six months in Malaysia and six months of the year travelling. They also have a great site for other travelling families and couples to meet called Vagabond Family.  I joined it myself and loved connecting and reading about other families.

Has settled down on the west coast of the US after years of travelling.

Our next family is a father-son team.  Talon is a single dad to an impressive 10-year-old boy named  Tigger.  The fact that he’s a single dad travelling is impressive but what blew me away was what he told me about his son. You see, his son has special needs.

Let me first tell you how their journey began. Everyone has their reasons for wanting to travel or live abroad, and their story is great.   In May 2011, after years of working in intensive care, trauma, and dying, Talon left his traditional work-life to embark on a round-the-world trip.

Talon and Tigger began their journey with $900 in the bank. Talon has been very creative in supporting him and his son, from medical transcription and writing to photography.  He even became a scuba instructor in Honduras, which has helped them bring in some decent money. Talon says their expenses usually average about USD 1,000 a month and says he could even cut it down further if he wanted but doesn’t because they enjoy eating out.

His son Tigger has done so well that he is now off all his meds. Talon attributes the marked improvement in his son’s anxiety and sensory issues to the amount of time he spends with his son and “world schooling.” His son’s progression has reaffirmed and eliminated all the doubts he used to have, and he is now 100 percent positive that his decision to live abroad, travel and home-school his son was the best decision he could have made for his two-person family.

No longer travelling! has settled down after many years of travelling.

Our fourth story is about another family, and rather than living nomadically and constantly travelling, they chose to stay in one place, China.

In Feb. 2011, they moved their family of four to Guangzhou, China. With two small children (1 & 3 at the time), there were many things that they were unsure of, but they knew one thing for sure: they wanted to go on adventures with their children and experience the world as a family. They have made some amazing friends and have had some unforgettable experiences together.

Mom says the ability to give her older child the opportunity to learn Mandarin and experience a culture at such a young age has been fun and exciting. Now both of their children speak Mandarin, and their almost five-year-old is fluent.  Mom told me a funny story; Their 2 yr old son has learned potty training “split pant” style, and she thinks it’s hilarious watching him flip back and forth.

Dad of the family is a web designer and asked his U.S. company if he could work remotely. Something that before they would never have dreamed of asking. The Mom of the family completed an online TESOL certificate before moving to China to teach English while living abroad. While living in China, they lived on $16 a day per person….much cheaper than their U.S. cost of living.   They have also spent a month in Thailand and hope to experience more of Southeast Asia while we can.

Adam Baker from Man vs. Debt decided to leave it all behind to travel for a few years. If you haven’t heard of Man vs. Debt, then let me fill you in.

In 2008 after the birth of their daughter, Adam Baker and his wife Courtenay spent a year selling all their crap and paid off over 18,000 dollars in consumer debt. Then In June 2009, they left for what was to be a year in Australia, but quickly turned into more mobile travels through Australia, New Zealand, Thailand, and finally back to Indiana.

Now Adam and his wife are running several businesses online and have several products that help others do the same thing they did, and he’s not done yet. That’s it for now. Stay tuned as I add to this growing list of unique and inspirational families and couples who left it all behind to travel or live abroad.