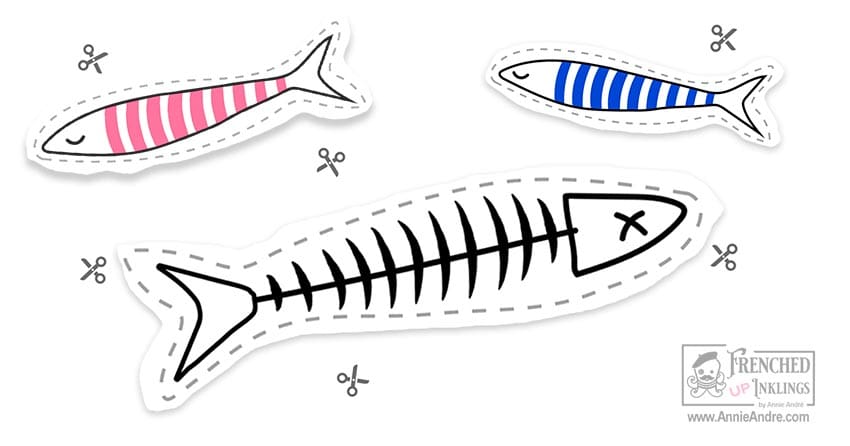 April fools day is probably one of the most widely recognized non-religious holidays in the Western world, known as a day of pranks, gags and jokes. However, most people have no idea why or how this tradition began. One theory is that the French may have inadvertently invented April Fools’ day. Let’s explore April Fools day traditions in France and some theories about how it may have begun.

In Anglophone countries, it’s April fool, in Scotland, April Gowk, in Brazil, day of the lie.

The literal translation of April fools is “dupe d’avril,” but if you said that to someone in France, they would stare blankly at you and have no clue what you were talking about.

2) How is Poisson d’avril celebrated in France?

Like most countries, playing tricks and gags on unsuspecting victims is part of the fun of April fools day. However, there’s one traditional prank that not many other countries have, and it involves a fish.

The fish on the back prank!

A common prank, especially among school-aged children, is to draw or print out a fish and stick it to the backs of unsuspecting victims. Once the unfortunate fool discovers the fish taped to their back, the kids have a yuck and scurry away, cackling and shouting: “Poisson d’avril, Poisson d’aviril.”

Why a fish? No one really knows, but there are theories that I’ll go over in a minute.

I made this printable fish which you can download

Print this at home and scotch it to someone’s back.

Adults and Even businesses in France play pranks and hoaxes:

It’s not just kids who love pranking their friends and parents. Adults like to get in on the action too.

From simple pranks on friends, family and co-workers to elaborate fake news hoaxes and marketing pranks.

HERE ARE A FEW EXAMPLES OF PRANKS.

Nice-Matin: In 2018, the news outlet Nice-Matin published an April fools day hoax article about the famous blue chairs along the beautiful “Promenade des Anglais,” stating that they were replaced by mundane yellow chairs.

Var-Matin: In 2017, news outlet Var-Matin played an especially cruel hoax on April first by reporting that the traditional French game of Boules would be banned.

The above image is an example of a Paris metro station renamed as part of April fools day pranks in France. J’aurais and Jaurès are pronounced the same but have two different meanings.

4) How French April Fools day (Poisson d’Avril) used to be celebrated in the past!

Up until the beginning of the twentieth century, people in France sent comical yet adorabe postcards on April 1st for poisson d’avril.

The cards usually wished friends and family good fortune, love, friendship or happiness. April first used to be when New Year was celebrated in France. Today, people still send New Years’ cards; however, now they send them on the first of January, sans le fish, of course.

5) Origins of April Fools Day: It may have been invented in France around the 1600s.

Although different cultures have celebrated April Fools’ Day for centuries, its exact origins remain a mystery.

One theory is that it started as a prank to shame slow adopters to the Gregorian calendar when January first became the new year’s date.

Before the Gregorian calendar, most people in France celebrated New years’ on the 25th of March with a week-long celebration that ended on the 1st of April.

This wasn’t unusual for the times. Throughout recorded history, most cultures used different dates that were central to their lives or dates tied to religion.

Fed up with the different New Year dates, which was confusing and caused an administrative fiasco, King Charles IX,  who was only 11 years at the time, issued the (Édit de Roussillon) on August 9th, 1564.  Roussillon was the name of one of the towns he visited during “Le Grand Tour De France.”

An édict is a decree or announcement of a law, often associated with monarchism.

This new law decreed that the New Year would begin on January 1st throughout the entire French Kingdom beginning on January 1st, 1567. At the time, the German Emperor had already fixed January 1st as the New Year’s date. When the Catholic Church sanctioned the new Gregorian Calendar in February of 1582, the January first date took off.

Catherine de Medicis wanted her son, King Charles the IX of France, to get to know his kingdom, so she arranged “Le grand tour de France.”

For two years, beginning January of 1564 through May 1st, 1566, King Charles IX, his mother and an entourage of nearly 2000 people travelled over 400 kilometres through some of the most remote border areas of the French kingdom.

Not everyone welcomed the change in the New Year date.

After King Charles IX switched to the newly decreed January 1st New Year’s date, some people ignored the new date. Others were just not aware of the change for years and continued to celebrate the New years in April or other dates depending on the diocese. News travelled slowly back then.

Those who adjusted their calendars for the January 1st New years dates ridiculed, made fun of, and played pranks on slow adopters to the “New” new year’s date of January first.

They would drop in, sometimes bringing fake gag New Year gifts. Back then, it was customary for people to visit friends, family and neighbours for the April 1st New Year and give gifts or tithes.

Thus the tradition of playing pranks on April first began. Or so it did if you believe this theory.

Another theory is that April Fools’ Day is much older and may have descended from “Hilaria,” celebrated on November 3 and March 25th, 7 days before the 1st of April (Calends).

Hilaria was a day of merriment, pranks, and rejoicing. It was one of several days in the festival of Cybele that honoured Attis.

Many of our current celebrations are tied to roman, greek and Egyptian celebrations, such as Mardi Gras and Carnival.

You might be interested in reading about Are these 15 French New Years’ Eve Foods Too Weird For You To Eat?

Or how did the fish get associated with April fools day?

There are many theories about how the fish became the symbol of April fools day in France (and a few other countries), but at best, these are vague conjectures. Here are a few that I know about.

Historically, fishermen were prohibited from fishing during April because it was the breeding period of fish. Some say it became a joke to send naive people to buy fish at the market when it was out of season. After all, only a fool would try to purchase fish during a period of time when it wasn’t available.

Another explanation is that since most of Europe celebrated the New year during Lent, a fasting period where the only meat one could eat was fish, people gave fish as gifts for the New Year.

Keep in mind that Friday, April 1, AD 33, is the date that Jesus Christ was crucified on the cross (using the Gregorian calendar).

Early Christians used to identify themselves with the sign or symbol of the fish known as ICHTHYS. It was a symbol that attracted little suspicion, making it a perfect secret symbol for persecuted Christians.

The fish symbol is based on a Greek acronym for the phrase “Jesus Christ, Son Of God, Savior.”

The Greek phrase is Ίησοῦς Χριστός, Θεοῦ Υἱός, Σωτήρ. If you take the first letter from each word in that Greek phrase, you have the acronym ΙΧΘΥΣ (Ichthus), which happens to the Koine Greek word for “fish.”

Keep in mind that Christianity borrowed many symbols from Roman, Greek and Egyptian cults and Pagan religions. The fish as a symbol and food was important to these old religions and cults long before Christians ever used it.

While the story of April fools day starting in France is just one of many legends, we may never know how it started.

Currently, playing pranks on April 1st is celebrated in many countries around the world, including Switzerland, Denmark, Italy, Canada, the UK and more. Each with their little idiosyncrasies.

But France, Italy and the French-speaking province of Quebec, Canada, are the only countries that call this day April Fish and have the custom of sticking paper fish on the backs as a prank.

One last thing. If you’re ever in France on April first, keep your eye out for fish-shaped chocolates sold in stores through Easter.

Happy April Fools Day!  Or is it?

You should read this
A Complete List Of French Bank Holidays, School Holidays And A Few Notable Celebrations And Festivals In In France Explained + Timeline Read More
Little Fisherman Drawstring Bags
$22.99
Shop Now