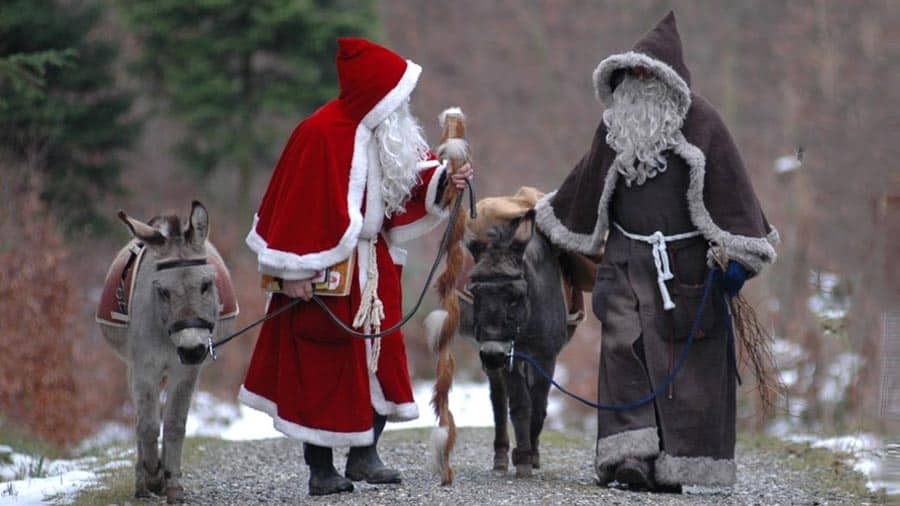 Many countries have different takes on Christmas traditions and rituals. One of France’s more quirky French Christmas traditions is Saint Nicholas and his creepy dark robe-wearing helper who punishes naughty children. Hint, he’s not a cute little elf on the shelf, and he makes the Grinch look like a pussy cat.

The Christmas holidays are supposed to be a time of peace, love, and generosity. A time to gather with family and friends, exchange gifts, and eat decadent meals.

However, at the root of all of this happy and cheery merrymaking is a dark and grim French Christmas tradition.

His name says it all.

In English, his name translates to “Father whipper” or “whipping father,” and his job is to accompany St Nicholas on December 6 during Saint Nicholas day.

While Saint Nicholas concerns himself with rewarding good children with gifts, pere fouettard, or whipping father is responsible for punishing the bad kids who he whips or abducts.

In other words, this threatening and menacing character’s primary purpose is to scare naughty kids into being good.

Although whipping father may be the devil incarnate, he’s fair and impartial and good children have nothing to fear from Santa’s evil nemesis.

You could say that the pere fouettard is the anti-Santa, or bad Santa, similar to the Grinch, only darker and scarier, and Saint Nicholas approved.

Where is Pere Fouettard celebrated in France?

Le Pere fouettard is known mainly where Saint Nicholas is still celebrated. These areas include the north and northeastern regions of France and parts of French-speaking Belgium and Switzerland.

See map below: areas in red are where St Nicholas and his evil sidekick are still observed. Notice that these French regions are closest to Germany, Holland and Belgium, where Saint Nicholas is also celebrated.

Saint Nicholas day has been celebrated throughout Europe for over 1000 years, and similar dark and intimidating characters that accompany Saint Nick who perform the same function as le pere fouettard exist all over Europe, not just in France.

There are more. Many more.

Regardless of his name, what he looks like, or where he comes from, they are all part of a group of closely related characters who have been terrorizing bad kids in France and Europe for centuries with one goal:

To Abduct, beat, whip, or punish naughty and disobedient children.

You should read this too!
All About French Santa Claus In France: Past & Present Traditions -

What is St. Nicholas Day?

The feast of St. Nicholas or Saint Nicholas day is celebrated on December 6 or December 19 In the Orthodox Church.

For many centuries, gift-giving took place on Saint Nicholas Day or in early January after New Year’s Eve.

Nicholas was a real life fourth-century bishop of Greek descent who became a saint and one of the inspirations for the modern-day Santa Claus and Saint Nicholas.

While Christmas and St. Nicolas Day have the same origins, Saint Nicholas celebrations and his evil helper have much more in common with its original tradition of paganism than the modern commercialized Santa Claus who delivers gifts to good children around the world on a sleigh pulled by magical reindeer.

Saint Nicholas, his donkey and Père fouettard visiting a school.

On the eve of Saint Nicholas day or on the day of, French preschools and elementary schools arrange for Saint Nicholas to visit students and pass out treats accompanied by his donkey and le père fouettard.

Many regions also organize parades. Below is a video of st Nick and le pere fouettard visiting a local school.

In France, Pere fouettard usually has a long black beard and wears a dark robe with a pointy hood with heavy black . Sometimes he has a red beard.

In his hand, he usually carries a switch or a French whip called a “martinet.”

The Martinet is a short whip made with a wooden handle and leather lashes that, up until the 1970s, was used to discipline unruly girls and boys in some schools and homes.

Another version of this sinister character has scraggly unkempt hair, wears a black suit and hat. He carries a chain and les grelots (jingle bells), which he rattles frantically as he threatens to take misbehaving and bad children away with him in his dirty old burlap bag or .

Origins of Father whipper: He was a cruel butcher and maybe a cannibal.

There are many legends around how pere fouettard became saint nick’s servant.

One popular story involves three children who got lost on their way home in the countryside somewhere in Lorraine, France.

The children stumble upon a Butcher and ask him to put them up for the night. Other versions say the man was an innkeeper who lured the three children into his home and kidnapped them.

The butcher then killed the three children, chopped them up and pickled them in a barrel to pass them off as a type of ham for sale that was a specialty of the Lorraine region.

Seven years later, Saint Nicolas somehow discovered the crimes and went to the butcher’s home or place of business, where he miraculously resurrected the children from the dead and returned them to their families.

As a punishment, saint Nicholas chained the butcher to his donkey, and the butcher became the nasty whipping father (père fouettard) who became responsible for punishing naughty children.

In France, statues and paintings often portray this event in showing Saint Nicholas with three children in a barrel.

Le Père Fouettard is a similar character, if not identical to many characters that perform the same function in other regions of France and other countries. Here is a look at several other characters in and outside of France.

In the Alsace Lorraine region along the French/German border, pere fouettard is also known as Hans Trapp.

According to legend, Hans Trapp is based on Hans von Trotha, a rich and ruthless German knight (1450 – 1503) who terrorized the local population. Hans lived at Château de Bewartstein in Germany, not far from Wissembourg in Northern Alsace. The castle is very famous and every year tourists flock to the castle to learn bout Hans Trapp and the castle.

Pere fouettard goes to America as Father Flog in the 1930s

Around the 1930s, pere fouettard left Europe for America and became father flog or spanky. There’s not much information about father flog, but we know that instead of working with Santa Claus, Father flog went around the country with Mother Flog punishing bad children.

Zwarte Piet (Black Pete) is the Dutch version of St Nick’s punishing helper in Holland and flemish-speaking areas of Belgium. In French-speaking Belgium, he looks identical to Black Pete but is called pere fouettard, even though he looks nothing like the French version.

Traditionally, Zwarte Piet is a black Moore dressed as a page boy who lives in Spain with st nick. He arrives by steamboat just in time for the annual Saint Nicholas festival.

His modern image is less scary, smiles more and often passes out cookies and treats to children during the annual Saint Nicholas festival.

Black Pete has been around since the mid-1800s and is very controversial because people who portray him in festivals and parades often wear blackface, curly wigs and red lipstick.

As you may have guessed, times change, and while many people think it’s racist, many Dutch cling to this Dutch character and tradition.

In Parts of Germany, the fearsome character accompanying Saint Nicholas on December 6 is Knecht Ruprecht: Knecht in German means servant or farmhand.

He’s a wild man with a bushy black beard, dressed in a brown or black robe with a pointy hood. He looks almost identical to the French pere fouettard. In his hand, he carries a large stick and sometimes carries a child-sized bag to abduct bad kids who have misbehaved.

Belsnickel is celebrated in some parts of the US, brought to America by German immigrants, who became known as the Pennsylvania Dutch. Belsnickel was also featured on an episode in season nine of The Office when Dwight dresses as Belsnickel.

Krampus, from “Kampen,” the old high German word for claw, is saint nicks helper in many Germanic regions.

Krampus is a more bestial or grotesque character than le pere fouettard. Its features can range from a devilish half-goat and half demon-horned creature to an actual demon or devil.

Krampus and the Germanic alpine folklore surrounding him predates Christianity and have spread far and wide to other areas, including Austria, southern Bavaria, Luxembourg, parts of Italy, Croatia, Hungary, Slovenia, the Czech Republic, the Slovak Republic, and German-speaking parts of Switzerland.

Krampus is even starting to take off in small pockets around the US.

Traditionally, people dress up as Krampus during the first two weeks of December, particularly in the evening of St Nicholas on December 5, to roam the streets frightening women and children.

There’s also a roller coaster called Krampus based on this famous mystical creature at the Nigloland Amusement park, 2 hours drive southeast of Paris,

If you want to experience Saint Nicholas and pere Fouettard, you’ll have to visit the Christmas markets and parades at the beginning of December. Remember, pere Fouetard and other versions of the legend only exist in areas where Saint Nicholas is celebrated.

One of the biggest celebrations is in Lorraine, France, where Saint Nicholas is the patron saint and where he supposedly resurrected the three children after the evil butcher murdered them. Alsace is also a fun place to partake in Saint Nicholas festivities.