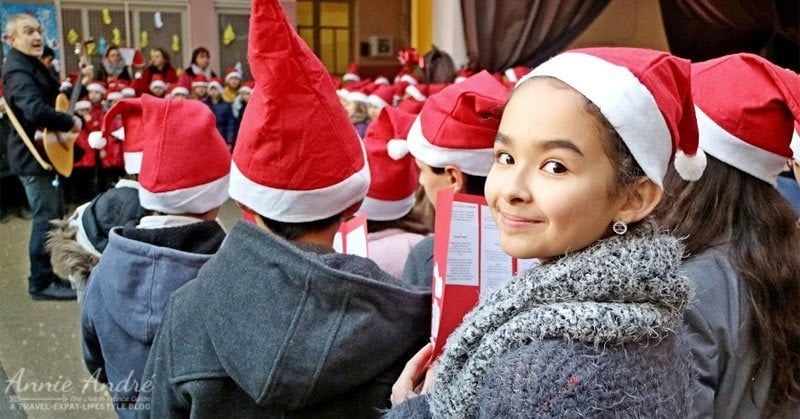 The French version of Jingle Bells, “Vive le Vent,” has the same catchy tune and is just as joyous as it is in English; however, the French Jingle Bells’ lyrics and title are completely different. Here is the literal translation of the French Jingle bells and a few videos of famous people singing it in French.

In French, a Christmas song is called “Les chants de Noël” or “noëls” (with a lowercase letter “n”).

Over the years, Christmas carols and Christmas songs such as Jingle Bells have been borrowed and translated from one language to another.

What you may not realize is sometimes the translated titles and lyrics of those original Christmas songs are changed completely while the tune remains the same.

I wrote an article about popular French Christmas songs in France here.

My guess is these changes have something to do with the cohesiveness of the song, making songs rhyme and flow. Translating songs word for word can’t really maintain these things, and so songwriters and singers who adapt these Christmas songs to their own language change the words and the title.

In French, Jingle Bell is called “Vive Le Vent” and literally translates to “Long live the wind” but can also mean “live the wind.”

“Vive” comes from the French verb “Vivre which means (to live). If you say “Vive (something),” it can mean anything from “Hooray (something)” to “Long live (something)” depending on the phrase, and it can be used for a person, place or thing.

Borrowing Christmas songs from other languages is nothing new.

The French version of Jingle bells was originally adapted to French by Francis Blanche in 1948, and it’s a popular Christmas song in France. Maybe not quite as popular as the original version is in the US and Canada, but most French children and adults know this catchy Christmas song tune well enough to hum it.

My daughter (pictured below), who has attended French schools her whole life, has sung the French version of Jingle Bells “Vive le vent” at almost all her school holiday Christmas shows.

Just as Elvis Presley, Bing Crosby, Frank Sinatra and Michael Bublé have all put their own spin on Jingle Bells, many famous singers have done the same for the French version.

Dalida first sang the French version of Jingle bells “Vive le Vent” back in the ’60s.

Dalida is not French, but she was and still is a very iconic singer in France, similar to how Julio Iglesias is popular in the US.

Lyrics to the French version of Jingle Bells.

Jingle Bells in French is extremely popular in France, especially with small children.

Paris is full of little hidden secrets. One of them is an often overlooked, not very eye-catching landmark that tourists often trample right over without even END_OF_DOCUMENT_TOKEN_TO_BE_REPLACED

Whether you’re interested in trying your hand at French Roulette, a round of Poker, or having some fun at the slot machines, here are the biggest, END_OF_DOCUMENT_TOKEN_TO_BE_REPLACED

Jump to RecipeCake salé is a savoury French loaf cake recipe made with a variety of herbs, spices and savoury filling ingredients.  It’s the most versatile END_OF_DOCUMENT_TOKEN_TO_BE_REPLACED

What do Twinkle, Twinkle, Little Star, The Alphabet Song, and Baa-Baa Black Sheep have in common? They all use the same catchy tune borrowed from an END_OF_DOCUMENT_TOKEN_TO_BE_REPLACED