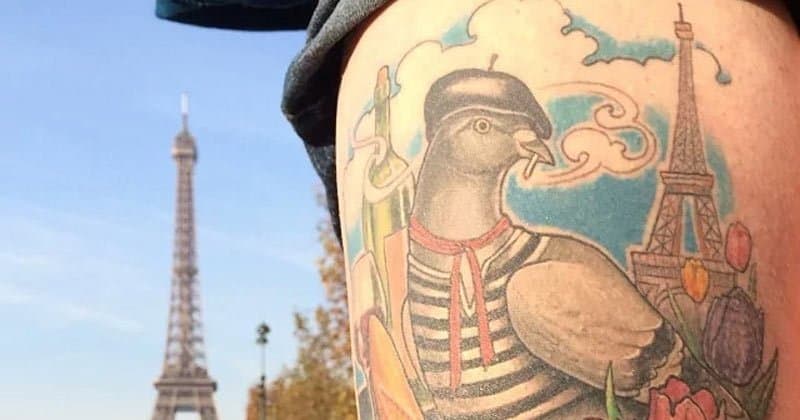 When it comes to French tattoos, you’ll never be short of ideas! Here are 50 fabulous French-themed tattoos to get your juices flowing, including 25 French symbols and imagery and 25 French quotes and phrases with their meanings.

Tattoos that make you think of France

When you think of France, what comes to mind?

The ? A French baguette? Perhaps something less obvious, like a sprig of lavender, a French quote or phrase?

Chances are, you wouldn’t think of someone who looks like Sylvain Helaine, aka Freaky Hoody, the most tattooed man in France and former French kindergarten teacher.

His entire body is covered in tattoos from head to toe, including his palms, the bottom of his feet, tongue, gums, and even his eyeballs are surgically inked black.

Sylvain lost his job teaching kindergarten at the Docteur Morere Elementary School in Palaiseau, a suburb of Paris, because “some” parents complained that he scared the children.

You don’t have to tattoo your entire body like Sylvain, but if you’re interested in getting a tattoo inspired by France and French culture, here are 50 ideas for you.

A cartographer’s dream tattoo if (s)he loved France. A tattoo of a map of France is not only a fun way to show your love for the country but also your wanderlust heart. It’s not overly obvious like the – most non-Europeans might not even recognize the famous hexagon shape, which all Children in France learn at a very young age. But that’s OK because it’s a great conversation starter.

A tattoo of the is perfect for anyone with French ancestry who wants to show off their patriotism or for Francophiles who love everything French. It’s one of the most recognizable flags in the world, so no one will have to guess its meaning. The number of different designs to make your ink look unique are endless. Here are a few ideas. I especially like the on the lips. Get it, French kiss?

Swallow tattoos were initially made popular by British sailors of the past. French fashion designer Coco incorporated it in her designs, making it a chic fashion symbol.

photo source of no 5 tattoos via Nyki Bell

Chanel No 5, Guerlain Shalimar, Lanvin, Yves Saint Laurent Parisienne- are just some of the classical French Perfumes that have long been synonymous with wealth, class and, of course, elegance! A tattoo of your favourite French or even a generic photo of a bottle is a classy way to elevate your tattoo style.

Provence France is known for many things, but the most recognizable might be the colour, the texture and the scent of its world-famous lavender fields.

The Lily of the Valley, known as “Muguet” in France, has a very special place in French culture.

On May 1st, for la Fête du Muguet, it’s customary to offer a sprig, bouquet or potted Lily of the Valley plant to friends and loved ones to wish them happiness, luck and prosperity in celebration of the arrival of spring.

Watch out, Lily of the valley is poisonous if ingested, even the water in the vase.

You should read more about the French custom of giving lily of the valley flowers (Muguet):

Fleur de Lis means “flower of the lily” and is a lily composed of three petals bound together near their bases. French monarchs first used this classical French emblem on their shields. English kings later used the symbol on their coat of arms to emphasize their claims to France’s throne. It’s also on the official of the Canadian province of Quebec, which is called Fleurdelisé (with the fleur-de-lis.)

“Le Coq Gaulois” or the “Gallic rooster” is one of France’s most widely recognized and identifiable symbols. It has been used intermittently since medieval times on French engravings and coins and has become the hallmark of French country design. French brands that incorporate the coq in their logo include sports brand giant “Le Coq Sportif” and “Pathé” cinemas in France.

Despite its name, French poodles are technically not a French breed; however, the French were responsible for helping develop the breed and boost their popularity, which may be why most people associate them with France.

If you love Frenchies, there’s nothing cuter than a French bulldog tattoo “Bouledogue.”

If you’re into French art from Famous French painters like Claude Monet, Paul Cézanne, Marc Chagall, there are thousands of tattoo ideas out there waiting to be discovered. Just crack open an art book for inspiration.

Be sure to look for a tattoo artist who has the artistic ability to recreate the French work of art.

12. Tattoos of famous cartoons and comics in France

If you’re into comics and cartoons, you have quite a few to choose from.

Although many classic French cartoons are from Belgium cartoonists, they are extremely popular in France and recognizable by all French people.

I bet you didn’t know that the Smurfs was also a Belgium creation by the Belgian cartoonist Peyou. They’re called “Les Schtroumpfs” in French.

Did you know there is a French amusement park near Paris called Parc Astérix based on the French language comic book.

France is filled with famous buildings and beautiful structure.

All good tattoo artists should be able to draw any of these French monuments onto your body in any style and size of your choosing.

Home is where your ink is. If your love for Paris goes beyond any one thing or you can’t get enough of Paris, then a Paris skyline tattoo is a straightforward way to say it.

If you love Paris, what about a tattoo of the , one of the most recognizable monuments in the world.

The style, design and even color combinations are endless.

Forget the stuffy clean-cut image you have of French chefs. Yes, they exist, but there’s a new breed of tattoo-wearing chefs these days.

Tattoos have become a sort of status symbol amongst professional French chefs . Just take a look at the famous French chef Ludo Lefebre who is covered in meaningful tattoos- like little badges of memory.

A quaint way to express your inner chef is an antique-looking butcher cut tattoo.

A chef knife is the perfect tattoo for home chefs and professional chefs with mad chopping skills.

Take it a step further with French cooking term such as “Mise en place”- which means “putting in place” or “everything in its place.” It’s the preparation of dishes and ingredients before the beginning of service.

From famous French dishes, to French wine and  stinky French cheese, the possibilities are endless for you French foodies when it comes to French cuisine inspired ink tattoos.

The French , not to be confused with a coconut macaroon, are sweet meringue-based confections that come in a rainbow of colours which always matches the ffilling.

Get a tattoo in every flavour and in full colour to show your love of French confectionery.

Brown ones are usually chocolate or coffee, red ones are strawberry, blue ones are blueberry.

No explanation is needed here. The French consume more wine per capita than any other nation of people- possible designs are endless.

Have a favorite bottle of wine or champagne? Dom Perignon, veuve clicquot, Tattinger?

20. Tattoo of a Croissant

The French produce hundreds of different types of cheese. Pick one- anyone for your next tattoo.

When it comes to French cliches, escargot (edible snails) should be at the top of the list along with the French better and stopped shirts.

A little-known fact about the French is that they’re responsible for many important inventions and technological advances, including movies, the hot air balloon, the bicycle and the bra!

Two French brothers were the first to successfully attempt a manned hot-air balloon ascent in 1783.

The beauty of getting a tattoo of a French quote, French word or French phrase is that there are thousands to choose from.

The quote can be a French phrase from a favourite book, song or movie. For instance, if you’re a Star Trek fan and love its opening credit matra, “Space: the final frontier”,  you could get it translated and inked on your body. In case you’re interested “L’espace, l’ultime frontière.”

Another great tattoo idea is to get inked with a loving word dedicated to a loved one such as “AMOUR”, French for love or “BELLE”, French for pretty.

The length and number of words in your tattoo will determine the best placement.

If you’re going with a longer quote, the back or along your thigh is a good place. Go with a shorter French quote if you want to put a quote on your inner arm, foot, wrist or collar bone. And then there are of course, chest tattoo quotes which can be as big or as small as you like.

For those that want to be a little more discreet, you can always put your tattoo in a private place where no one can see it unless you let them.

On to the list of French phrases that would make great French tattoos.

I’ve translated their meaning from French to English.

For all you Pulp fiction fans, “C’est la vie” is the Chuck Berry song that John Travolta and Uma Therman did that wild dance to.

Once upon a time.

“Once upon a time” is a great literary tattoo not only because it’s the first line of most fairy tales; it also reminds us not to dwell too much on the past because there are always new beginnings. Getting it in French adds even more magical elegance to it.

No, I regret nothing.

All you need is love.

I love my parents.

There is always hope.

The world is at my feet.

Everything happens for a reason.

I want to love and be loved.

One love, one life.

Love is my life.

My happiness depends only on me.

This is also the name of a song sung in 1959 by Jane Morgan.

Believe in the impossible.

The more you delve into French culture, the greater the chance of getting even more fabulous French tattoo ideas.

If you’re still short of ideas after looking through this blog post, inspiration is never far away, with thousands of books, magazines and French websites just waiting to light your imagination.

Remember, though – tattoos are for life. Make sure you’re certain that you want something inked onto your body forever, and make sure you take care of your new tattoo as best as possible to ensure it looks beautiful for as long as you live.

Thanks to Authority Tattoo for co-authoring this post with me.