8 Delicious Vegan French Cheese Recipes You Can Make At Home 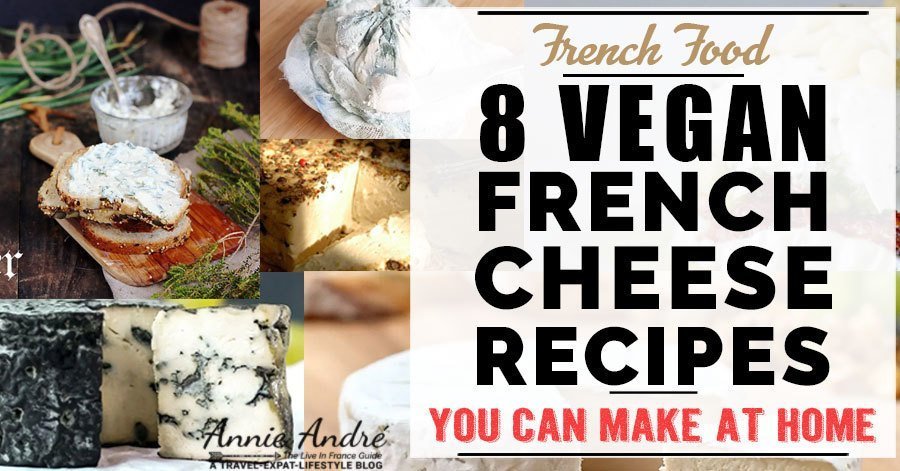 TABLE OF CONTENTS: Click to jump to a section

Vegan cheese and dairy in France

It’s not easy for cheese lovers to give up cheese and creamy dairy products but for the French, it’s especially hard because cheese is such an integral part of French culture and the French mealtime.

Giving up cheese, butter, crème fraîche and other dairy products that make French food deliciously French is one of the main reasons why so many French vegetarians never make the leap to full-blown vegan.

But veganism is slowly but surely growing in France and those that do brave the vegan way of life do just fine without meat but often end up missing cheese and dairy products the most.

Fortunately, there are more and more artisanal and specialty vegan crémerie’s which use the care, craftsmanship and traditional cheese-making methods of the finest cheesemakers to create plant-based cheeses with the goal of mimicking not only the taste of real cheese but also the look, smell and feel of real cheese.

Jay and joy in Paris is one of the more well known vegan creameries that produce some delicious artisanal vegan cheeses and most French vegans know or have heard of this little shop.

So if the French are not all thumbing their noses at vegan cheeses, then it can’t be all that bad.

Here are a few ways vegan and plant based cheeses are referred to in the French language.

An intro to vegan cheeses

If you’re new to the vegan cheese world too, here is a quick primer on what vegan cheese is and is not. Otherwise just skip to the French vegan cheese recipes below. 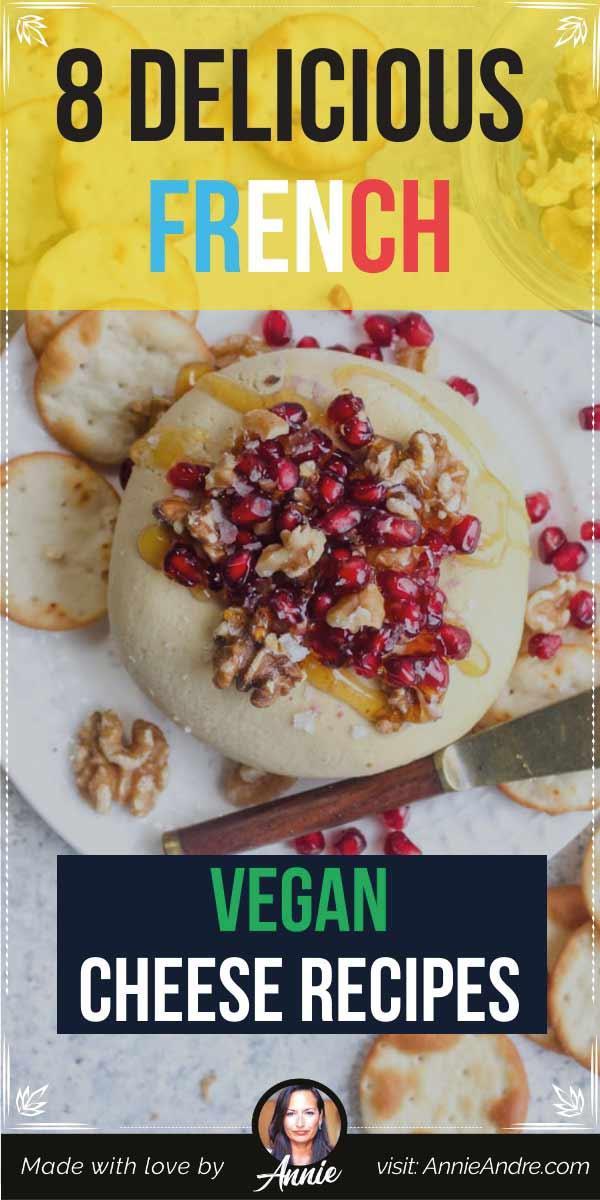 What is vegan cheese and what is it made of?

“Real cheese”, the way it’s been made for thousands of years is made with dairy derived from an animal such as a cow or a goat.

Vegan cheese is actually not cheese at all, just like almond milk, is not actually milk because they DO NOT contain any animal derived dairy.

vegan cheeses are entirely plant-based and are usually made with nuts, these are “nut cheeses” but there are plenty of vegan cheeses made with tofu and soy yoghurt.

A popular choice for vegan nut cheeses are cashews because it emulates the creamy texture of real cheese but other nuts such as almonds and pine nuts can also be used.

Many nut cheese recipes will require you to use nut milk which you can always buy but can easily make at home in a flash.

Watch this video which shows you how easy it is to make your own almond milk.

If you have a tree nut allergy, there are nut free cheeses which use other ingredients such as oats or sesame as their main ingredient.

How long does it take to make vegan cheese at home?

Depending on the recipe, it can take a couple of hours from start to finish to make a vegan cheese however if you follow a recipe which uses cultures or other traditional cheese-making methods, it can take a few days, up to a month because you have to allow the vegan cheese to ferment and age.

The bad news first. Unfortunately, If you’re looking for a vegan cheese that tastes exactly like the real deal, you’re out of luck. Most cheese fanatics say NO, vegan plant-based cheeses don’t taste exactly like real cheese and I agree, although some nut-based vegan cheeses come pretty close. I think soy-based vegan cheeses tend to lack the depth of flavour of dairy cheese but they still taste pretty good.

The good news is that non-dairy cheeses have been around for years and although there haven’t been very good alternatives in the past, scientists and adventurous home cooks are figuring out more and more ways to make vegan cheeses taste and act like real cheese.

Some common ingredients home chefs use to make vegan cheese recipes taste or act like real cheese are:

Adding cultures can take your vegan cheeses to the next level:

Adding live cultures to your plant-based cheese will not only make your vegan cheese taste more tangy like real cheese, it also makes it nutritionally rich with beneficial bacteria.

Here’s a little information about some of the live cultures that vegan cheesemongers and hobbyists often use in their plant-based cheese recipes.

Rejuvelac- A fermented liquid full of enzymes and good bacteria which is made by soaking sprouted grain such as quinoa in water for about two days at room temperature and then reserving the liquid. It’s usually added to a fat base such as cashew paste, where it sits for at least a day to allow the cultures to grow and flavours to impregnate the vegan cheese. You can learn how to sprout your own rejuvelac by watching this video.

Probiotic – a vegan starter culture with Acidophilus which allows the cheese to ferment and gives your nut cheese the sharp and sour taste.

Spirulina – blue-green algae that nutritionists call the superfood of the future.

Eight French vegan cheese recipes you can make at home. 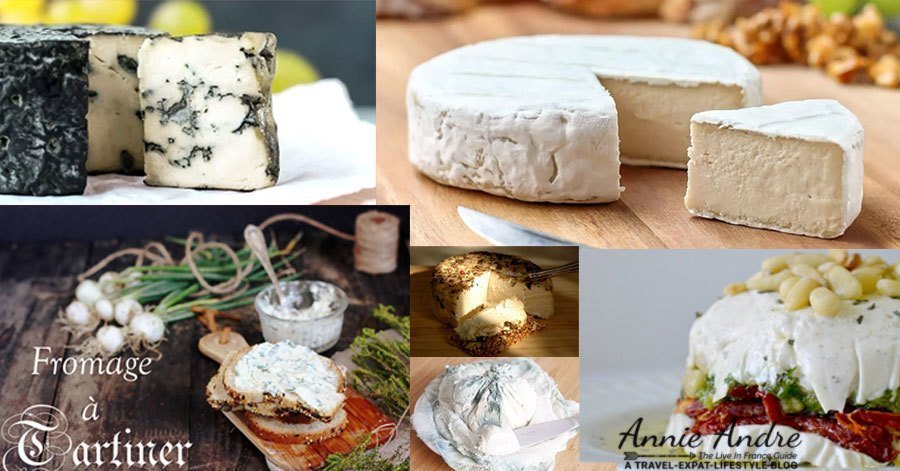 On with the recipes.

You can easily make vegan cheese with surprisingly few ingredients, many of which you can usually find at your local grocery store or online.

You’ll either love vegan cheese or hate it but if you’re trying to go vegan and you love cheese, it’s you’re only alternative to the real thing other than going cold turkey.

Gruyere is probably one of the most important French cheeses in the French kitchen. It can be found in so many French dishes like Croque Monsieur, French onion soup, Gratin Dauphinoise and Fondue.

Traditional French Gruyere is a hard cheese with a slightly salty, nutty flavour that is sweeter than Swiss Gruyere. Comté and Beaufort are also considered French Gruyere style cheeses.

How long does it take to make?

Once you combine all the ingredients, you’ll have to air dry it in a cheesecloth for about 1 to three days.

Watch the video to see how it’s done.

Boursin is a soft crumbly and creamy cheese similar to cream cheese which comes in many flavours such as garlic & fine herbs.

Originally developed in Normandy France back in 1963 by François Boursin, today Boursin is a household name and is regularly served at celebrations, parties and dinner tables throughout France.

How long to make?

Once you have all the ingredients for this vegan version of Boursin, it will take you less than an hour to make but you’ll have to let it sit and chill for 24 hours. 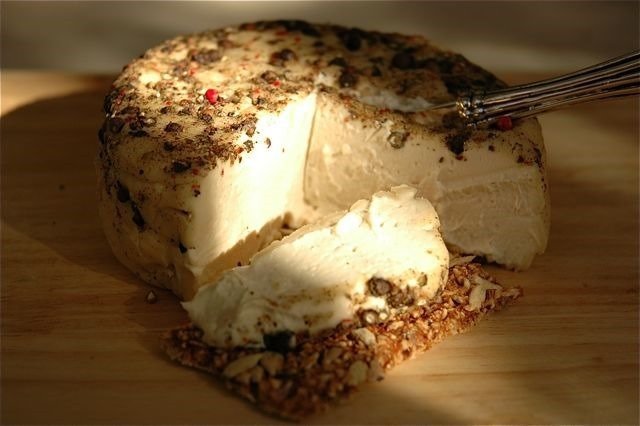 The main ingredients are…

You can get the recipe for this vegan Boursin over at My culinary confessions.

Check out this commercial for Boursin below. Makes me hungry.

Here’s a blue cheese recipe you can make in an afternoon. Chill overnight and voila!

The mould in this cheese isn’t real mould. It’s achieved by mixing some of the cashew cheese with dry herbs and spirulina. 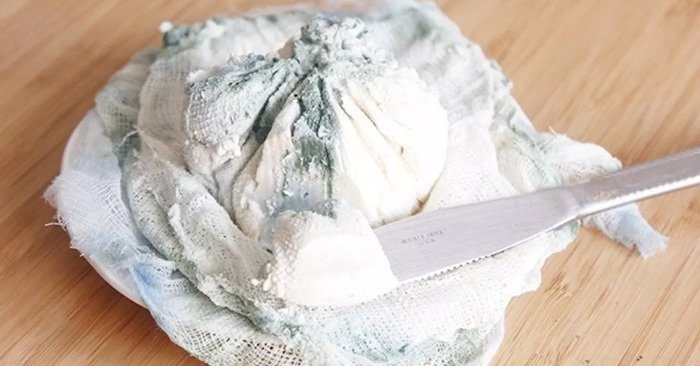 Ingredients in this recipe are…

Get the recipe for this vegan style blue cheese over at one green planet.

It’s hard to believe you can make a vegan blue cheese using traditional cheese making methods at home but you can if you have the patience—about a month worth of patience.

Roquefort is a type of French blue cheese traditionally made with sheep’s milk and adding cultures of a mould called Penicillium Roqueforti, named after the French town of Roquefort France which has caves full of naturally occurring mould spores. The end result is a white cheese with blue spots and veins throughout the cheese.

This vegan recipe replicates the taste, feel and look of Roquefort blue cheese better than other vegan blue cheese recipes because instead of using nutritional yeast or other cheese flavourings to replicate a cheese flavour along with something acidic like vinegar or lemon juice, this recipe requires cultures and actual moulds like Penicillium Candidum or Penicillium Roqueforti.

Just take a look at the photo below. That’s the end result. Looks just like dairy blue cheese, doesn’t it? 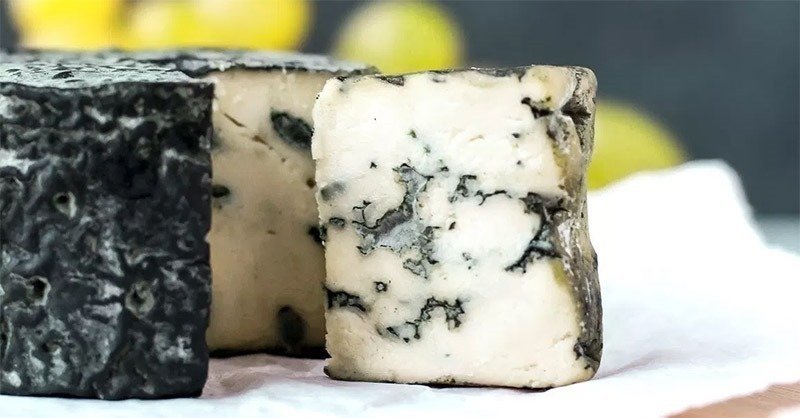 How long does it take to make this cheese?:

You’ll need to allow this cheese to age for three to five weeks to allow the mould to grow which is what gives this vegan blue cheese recipe it’s complex flavours you just can’t replicate with flavourings.

Try serving this vegan blue cheese at your next dinner party— It’s soft, creamy and spreadable but firm enough to cut into slices. You’ll impress the heck out of your friends too.

Like the blue cheese recipe above, this one uses some traditional cheese making methods.

Traditional camembert uses a live mould called penicillium candidum and so does this recipe. The end result is this vegan Camembert which looks and feels almost like the real thing. Taste wise it comes pretty close. Just check out the photo helow. 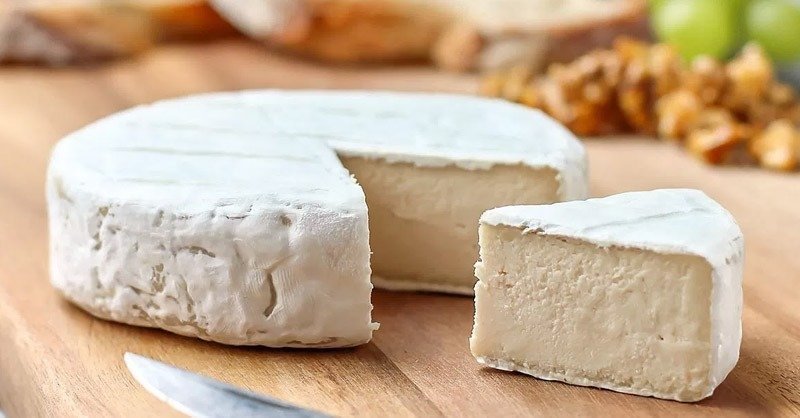 How long does it take to make this vegan aged camembert cheese?

It’s not too complicated to make but you’ll need to be diligent and patient because you have to let it age for 3 weeks, flipping it once a day.

Get the vegan camembert recipe from Thomas over at “Full of Plants” here.

Most goat cheeses are called Chevre which is the French word for Goats and this mock goat cheese recipe is perfect if you’re in a rush and don’t have the time or patience to make a cheese using traditional cheese making methods. It’s a raw vegan cheese recipe with basil pesto, pine nuts and sun dried tomatoes, perfect for a party. 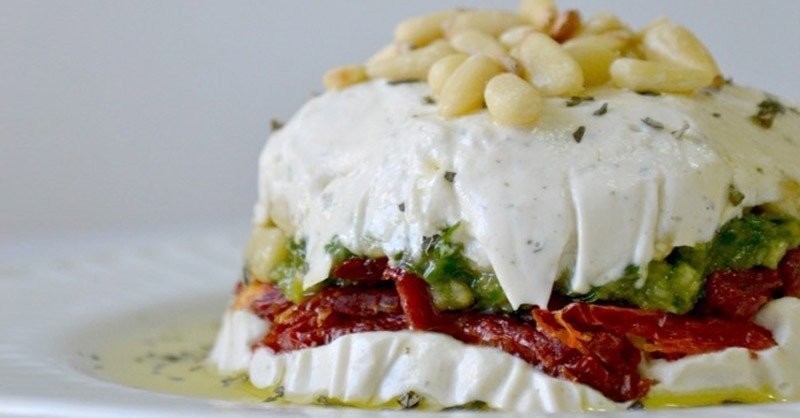 You’ll need six ingredients then chill for an hour.

You can get the recipe by Cara over at Fork & Beans here.

In France, “fromage frais à tartiner ” is a  soft, smooth and creamy fresh cheese spread, similar in taste to cream cheese but much softer and lower in fat.  It’s popular as a party aperitif or on toast in the morning.

What I like about this recipe is you can use it as a base and add whatever flavours you like to it. Garlic and onion, oregano, fine herbs etc. You also don’t have to use nuts in this recipe.

By the way, this recipe is in French. I couldn’t find a decent recipe in English but you can easily translate the page into English by using google page translate. 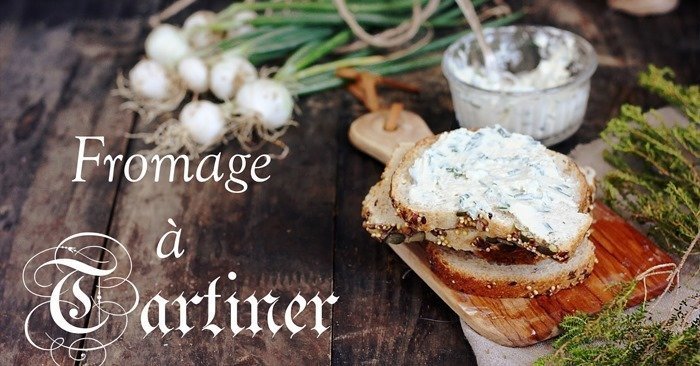 If you want to add a fine herb taste:

Here is a video showing you the entire process from start to finish.