French Fleur De Lis: National flower of France isn’t what you think it is 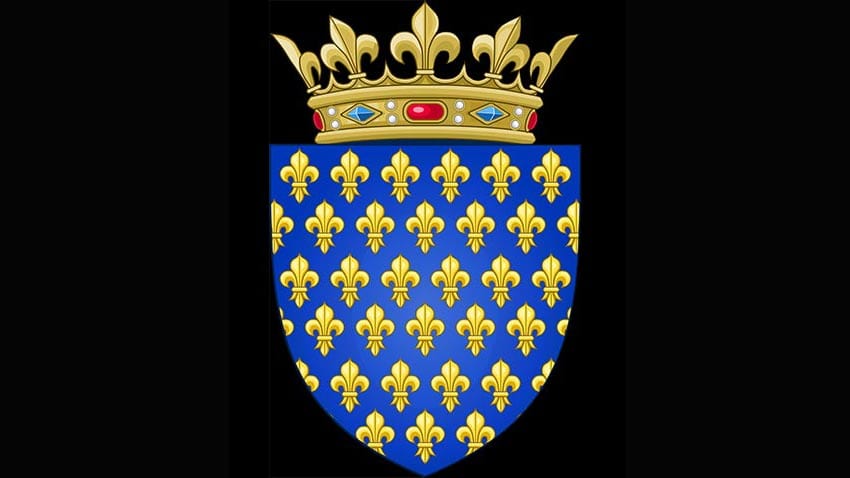 The “fleur-de-Lis” was the emblem used by French royalty for centuries. But why? What does it mean? What is it, and where did it come from?

The origin of the national flower of France and how the fleur-de-lys became a symbol of French royalty has been hotly debated for centuries.

There’s plenty of speculation and lots of lore, but sorting fact from fiction from history is difficult considering stories were passed by word of mouth, and there are gaps in written records.

What is the Fleur de Lis?

The Fleur-de-lis symbol or emblem, sometimes spelled Fleur-de-lys or fleur-de-luce, is supposedly a stylized flower design of a real flower where three petals are attached at the base.

For centuries, the fleur-de-Lys has been both a royal and religious symbol in France as well as the national flower of France.

French kings and the French monarchy used the fleur-de-lis on flags, clothing, crowns, staffs, coat of arms, and decorative elements in architecture and art.

In the catholic religion, the church has used the three petals of the fleur-de-lis to symbolize the holy trinity (the Father, the Son and the Holy Spirit) and the theological virtues (faith, hope and charity).

Although most people think of France when they see the fleur de Lys, no one knows for sure where it’s from.

What is known is that it’s been used as a royal or religious symbol by many ancient civilizations and cultures that predate France by thousands of years. It’s even been linked to Mesopotamia and the Sumerian civilization, the oldest civilization known to mankind.

For the ancient Sumerians, the Fleur-de-lis symbolized the Sumerian trinity, similar to the catholic trinity. It was also an ornamental feature for royalty that represented Nimrod, Semiramis, and Tammuz.

But what is it?

Is it the lily or the Iris?

What is the national flower of France depicted on the French fleur-de-lys emblem?

There always seems to be some confusion about whether the flower represented on the fleur-de-lys symbol is an iris or a lily.

Fleur-de-lis = “Flower of the lily” aka”Lily Flower, ” but the flower on the fleur-de-lys looks nothing like a lily.

Despite the name, many historians believe the inspiration for the golden flower on the fleur-de-lys is most likely a yellow Iris (species: Iris pseudacorus), also known as marsh iris, yellow , iris, and the water

The confusion might be tied to the name “Lys” or “Lis,” the French word for lily.

As Juliette said in Shakespeare’s play Romeo and Juliet, “what’s in a name? The name of a thing doesn’t matter as much as the quality of the thing.”

In this case, the physical qualities of the “fleur de lis” emblems three petal design and typical golden colour look more like a golden iris than a lily.

Why call an iris a lily?

Historically, the names Iris and lily have been used interchangeably, causing confusion about which flower was the original fleur-de-lis/lys.

But it’s not just the fleur de lis.

There are roughly 100 flowers called lilies that are not lilies (see the list.) Here are a few examples.

The flower of the river Lys

According to Pierre-Augustin Boissier de Sauvages, an important French naturalist and lexicographer: (1710-1795), the Franks lived in marshy areas near the Lis river, which runs from Pas de Calais in northern France to Ghent, Belgium.

The river was called Lis, but today it’s known as Lys or Leie in Flemish / Dutch. The Dutch name for the river, Leie, comes from Old Dutch of Celtic origins meaning to flow or flowing.

A yellow iris grew along the river wetlands, which the Franks called “Lisbloem.” Pierre-Augustin said that descriptions of the Lisbloem resemble a yellow Iris because of its shape, bright coloured flowers and its marsh habitat.

“Bloem” became “fleur” (flower), and “Lis” the name of the river remained the same.

In a world of changing spelling and evolving languages, it’s easy to imagine how Lisbloem or Lieschblum became fleur-de-luce, fleur-de-lis, and fleur-de-lys.

More evidence that the fleur de Lys is a yellow Iris and not a lily is that both the and the emblem of  Brussels (the capital of Belgium) depict the Iris pseudacorus (yellow Iris).

The yellow Iris is also native to Europe, while the lily is not.

So how did the Fleur-de-lys symbol become associated with French kings?

Why did French kings adopt the Fleur-de-lys as their emblem?

Here are two legends that stand out about Clovis (466-511), king of the Franks, and the first king of France, which links the yellow with the French coat of arms.

King Clovis adopted the yellow flower as his symbol

1 ) In one legend, the fleur de Lys emblem may have been introduced around the 9th century when Clovis fought and won the battle of Vouillé (507) near Poitiers.

Per this legend, Clovis and his army were trapped along the banks of the river Lis, but Clovis spotted a group of wild yellow flowers, “Lisbloem.” Because the yellow Iris grew in shallow waters, they knew they could safely cross, which resulted in Clovis’s army defeating the Goths.

2 ) Another legend says that yellow waterlilies magically formed a path for Clovis and his army on his way to the battle, which allowed them to cross the river safely and win his crusade.

In both versions of the legend, this is why Clovis adopted the wild yellow flower as his symbol.

From there, this wild golden flower was adopted as the royal emblem of France and all its successors and eventually became the unofficial national flower of France.

Joan of Arc carried a white banner that featured the fleur-de-lis when she fought in the war against England.

And the Québec the “Fleurdelisé,” pays tribute to its French roots with its fleur-de-lys . Quebec was once a part of nouveau France (New France), the area colonized by France in North America.

The French monarch and French throne are both long gone, but you can easily find the fleur de Lis symbol in almost every part of the world as a decorative element on clothing,  jewelry, fence posts, tattoo designs and more.

It’s also one of the symbols of Mardi gras, especially in New Orleans. The boy scouts use the fleur-de-lys design for their scouting organization too.

The national flower of France emblem even adorns the golden paper crown you get when you buy a king cake (galette des rois) for three kings day (Epiphany).

Where did the mysterious fleur de Lys motif come from, and why has it been so popular in so many cultures for thousands of years?

We may never know, and scholars will probably never agree.

Some historians think that the fleur de Lys is not a flower at all and could be a trident, an arrowhead, a bee, the head of a lance, a sceptre, and even a frog.

Whatever “IT” is, the one thing we know for sure is that it’s been used as an ornament, symbol and emblem by almost all civilizations in the old and new world, whether for religion, fashion or nobility.

And it’s pretty too!