The 7 days of the week in French: Its curious ancient origins & meaning 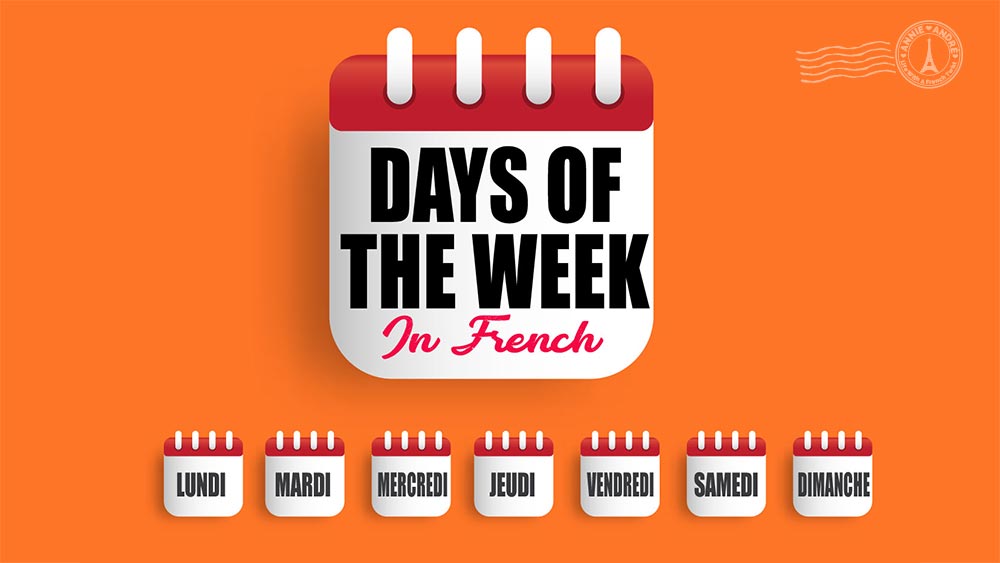 Here’s a list of the 7 days of the week in the French language, plus their curious ancient origins and meaning, which will help you memorize them forever.

What Are the 7 Days of the Week in the French language?

Before we dive into the etymology of the 7 days of the week in French, let’s establish their names in the order a French person would say them.

The week starts on Monday, not Sunday!

If you’re from the United States, the UK, Canada and a few other countries, you’re probably used to seeing calendars that start the week on Sunday.

However, in France and the rest of Europe, which uses the ISO 8601 standard, the first day of the week begins on Monday.

The ISO 8601 standard gives a way of presenting dates and times that are clearly defined and understandable to people from different time zones and cultures as well as machines.

List of the 7 French days of the week and how to pronounce them.

With the exception of Saturday and Sunday, the days of the week in French are named after the planets of Hellenistic astrology, which are the seven classical planets easily seen with the naked eye.

They are the Moon, the planets Mars, Mercury, Jupiter, Venus, Saturn and the Sun. (the sun and moon were once considered planets.)

Most historians agree that we can thank the ancient Babylonians who lived in modern-day Iraq 4000 years ago for the 7 day week.

The Babylonians based the 7 day week on the Sun, Moon, and the five planetary bodies known to them or rather that they could see in the sky. They believed each celestial body was ruled by a god or goddess who shaped events on earth.

The order of the days of the week is not random either.

According to Cassius, a 3rd-century Christian historian, ancient astrologists ascribed the days of the week to the seven classical planets in a cyclical sequence that could be seen with the naked eye at a particular time of the day.

Later, the ancient Greeks from the Hellenistic period adopted the seven-day week but substituted the Babylonian god names with the names of their Greek deities, which also corresponded with the planets, sun and moon.

They were: Helios, Selene, Ares, Hermes, Zeus, Aphrodite, and Cronos, aka Kronos.

These days were only known to Greek astrologers and were not used by everyday people.

With the rise of the Roman Empire, the Romans substituted the Greek days of the week after their own Roman gods which corresponded with the Greek gods.

From there, the seven-day week spread to other civilizations, which sometimes changed the names to their own language and beliefs.

For example, The Anglo-Saxons renamed Tuesday through Friday after Norse gods while keeping Roman names for Saturday, Sunday and Monday.

The Romance Languages, such as French best preserved the original ancient Roman names for the days of the week

Today, all Romance languages which evolved from Latin still use the Roman planetary god names for the days of the week, except for modern Portuguese and Mirandese. This is why some days of the week sound so different in English and French.

Tuesday in Spanish, Italian, and French is martes, martedi and mardi, named after the Roman God and planet Mars. In comparison, Tuesday in English gets its name from the Anglo-Saxon one-handed duelling god of war, Tiw, also known as Tyr to the Norse Vikings.

Wednesday in English comes from Woden, the Anglo-Saxon king of the gods while in French it’s mercredi from the planet and god mercury.

Original names of the Roman (and Greek) days of the week

Saturn day was replaced by sambati dies (sambatum), Latin for “day of the Sabbath”, which became “samedi” in French.

Sun day was replaced by Dominicus dies (Dominica), Latin for “the Lord’s Day”, which became “dimanche” in French.

What gender are the 7 French days of the week?

All days of the week in French are masculine.

Why aren’t the 7 days of the week in French capitalized?

Capitalization is much less common in French than in English.

You never capitalize the days of the week in French unless they start a sentence.

Months of the year and languages are also not capitalized in French, and you never capitalize nationalities in French when they are used as adjectives to modify a noun.

This surprised me when I first moved to France because, in French-speaking Quebec, we always use the French phrase “la fin de semaine,” which literally means “the end of the week.”

Adding the article “le” before the day of the week in French changes its meaning from a single day to something you do regularly on a given day.

Both phrases below say the same thing: “Every Tuesday, I eat with my girlfriend.”

See you next week

Memorizing the 7 days of the week in French

Just remember that the names for Saturday and Sunday were changed from a planetary celestial body to Sabbath day (samedi) and day of the lord (dimanche).

Pin Share Tweet French is one of many Romance languages. You’ve heard the term, but do you know what romance languages are or why they’re called END_OF_DOCUMENT_TOKEN_TO_BE_REPLACED

CHEERS! Bottom’s up! Here’s mud in your eye! Cin-Cin! Have you ever wondered how to say cheers in French? Here are 11 ways to raise a END_OF_DOCUMENT_TOKEN_TO_BE_REPLACED

Everyone loves nicknames, and France has quite a few. Here’s the low down behind 20 well-known and a few not so well known ancient and modern END_OF_DOCUMENT_TOKEN_TO_BE_REPLACED

“Paris point zero,” also known as “Kilometre zero,” is an often overlooked, not very eye-catching landmark with a useful purpose and a forgotten dark history that END_OF_DOCUMENT_TOKEN_TO_BE_REPLACED