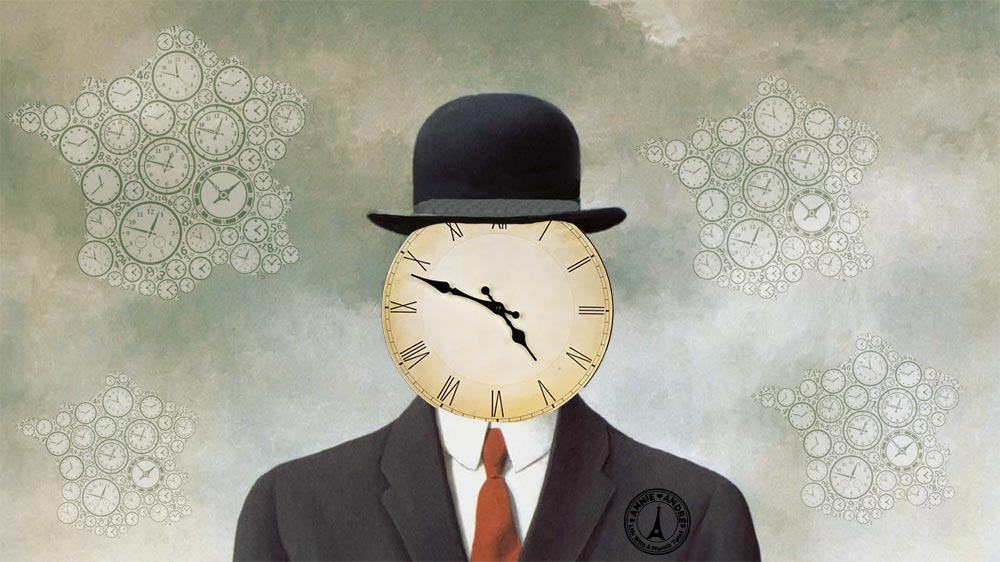 Pacific Standard, Greenwich mean time, Western European time? The division of the world’s time is confusing. Here’s what you need to know about time zones using the time in France as an example.

Do you know the date and time in France right now?

The current date and time in France 24-hour clock.

France and most of the world uses military time.

Many countries (mainly English-speaking ones) use the 12-hour clock; however, France uses military time, also known as the 24-hour clock; the preferred way to refer to time in most of the world.

Military time is a way to tell time using 24 hours and avoids confusion between A.M. and P.M.

What is a Time zone?

To determine the time in France or anywhere in the world, you need to know its time zone and UTC.

Even if you’ve never travelled abroad, you’re probably familiar with the term “time zone.” Every country on earth has at least one-time zone, but many countries have more than one.

But how many of us really understand how the concept of time zones work?

Someone recently asked me this question, and although I thought I knew the answer, I couldn’t explain it, so I decided to do a little research in relation to where I live, which is in France, everyone’s favourite tourist destination.

I won’t get all technical on you, but basically, time zones are used to divide the world’s 24-hour days into more manageable chunks. If you want to learn how time zones came about, you can read more about the history of time zones at BBC.

Time zones run from pole to pole and tend to follow a country’s boundaries rather than along the north-south longitude lines. For instance, if you look at the world’s time zone map above, you’ll notice that the time zone lines run around Greenland so that the majority of the country can be in the same time zone.

France has the most time zones in the world.

If you ask someone what the time zone France is in, most people might respond with UTC +1. But this isn’t really correct. UTC+01:00 only takes into account Central European Timezone (CET), the part of France that is in Europe.

France actually has 13 time zones, thanks to it’s overseas territories including France’s claim to Adélie Land in Antarctica.

That’s more than any other country in the world.

Some sources say that France only has 12 time zones because most countries don’t recognize France’s claim on Antarctica,  Adélie Land, which is in timezone UTC+05:10

Other countries with 3 or more time zones

All the rest of the countries in the world have two or fewer time zones.

Table of France’s time zone, including daylight savings and Antarctica.

Here’s a look at France’s time zones organized by UTC, including daylight savings.

Timezones are calculated in relation to how far ahead or behind they are to UTC±00:00, “Universal Time Coordinated,” aka “Coordinated Universal Time” which is maintained by the Bureau International des Poids et Mesures (BIPM) not far from Paris, France.

UTC is located in Time Zone 0, the Prime meridian, which is in the local time of Greenwich, England.

UTC Universal Time coordinated (UTC±00:00) has many synonyms, including:

If you look at a map of the world’s time zones, UTC±00:00 is the center or the first time zone from which all other time zones are based. It’s always the same, UTC +00:00.

Any country/city that is within UTC±00:00 will have the same local time. Here are some cities and countries in the UTC±00:00 time zone.

You can calculate the time based on two different UTC time zones.

For example, if you are in Paris and want to know the local time in San Francisco, you can calculate the time difference using UTC times for those two places.

Starting from Paris, which is in UTC +01:00, you have to move 9 time zones going east, which means San Francisco is 9 hours behind Paris.

Wrapping up time in France and France’s time zones

Although France has the most time zones in the world, most travellers travelling to France will be most interested in the time zone of Metropolitan France. The part of France that’s located in Europe and not France’s territories.

All you have to remember is that metropolitan France’s standard time is called: CET – Central European Time (UTC +01:00). Which means that France is 1 hour ahead of UTC (Universal Time Coordinated) because it’s located one time zone to the right of Western European Time (WET) UTC±00:00