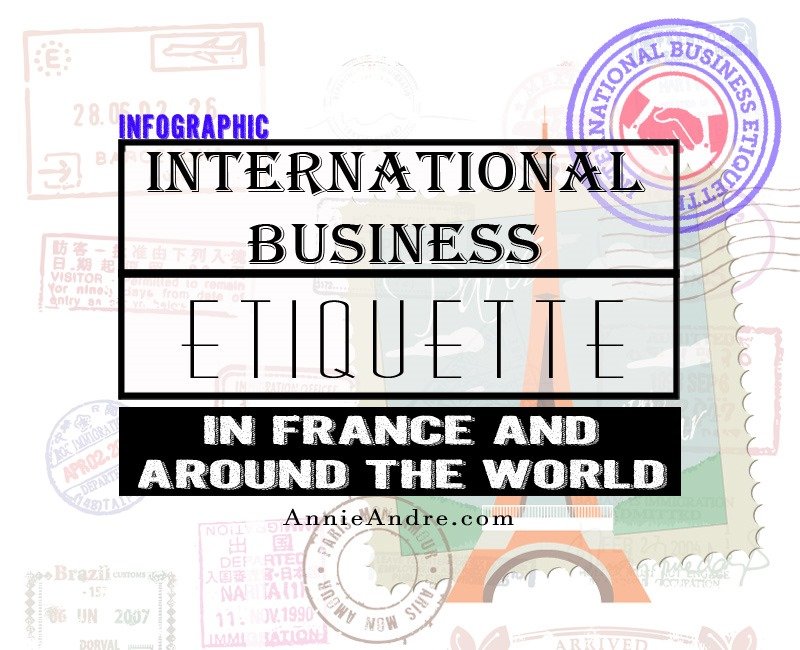 If you’re going abroad for business the last thing you want to do is accidentally do something to offend your business colleagues. With some help from Cyborlink, I’ve outlined some basic French business etiquette for you to follow when doing business in France. I’ve also included an infographic on business etiquette from WD Storage which outlines the do’s and dont’s of international business etiquette and conduct in seven countries including: France, South Africa, Argentina, China, Germany, UK, and Italy. Study up so you can make a great impression.

Due to its large geographic area, regional differences and large number of immigrants, France is a diverse country.  Despite France’s ethnic and cultural diversity, the French attitude towards foreigners can vary widely but in general, the French are NOT very tolerant of foreigners.  For example, if you are a Muslim women who wears a full head covering veil, you may have issues conducting business in France since the wearing of such a veil in public is banned by law whether you are French or not.  The official reason for the banishment of the full head covering is security.

Here are some other tips to help you manoeuvre French business culture etiquette from how to dress and act to communicating and gift giving in business situations.

How to dress for business situations in France

The French are very conscientious of their appearance.  Both men and women dress relatively conservative. Here are a few tips to help you blend in and not call unneeded attention to your attire.

How to behave in business situations in France

The last thing you want to do is unknowingly come off as rude or vulgar without even knowing it. here are some basic French business etiquette rules on how to behave at work in France.

How to give a gift to business associates in France

Giving a gift to business associates is not common practice in France so giving one in France is usually left to the foreigner’s discretion: If you would like to express appreciation to a French business contact, you may be better off hosting a special event or diner than to give a business gift. If you can’t host a special even than here are some basic tips to follow.

How to communicate in business situations in France

You probably already know that French is the official language in France and that the French have a great appreciation for the art of conversation. So if you don’t speak French or speak very little French, you should know that many (not all) French people in business do speak some English.  Here are some general guidelines on how to communicate with French collegues and business people.

Related to international business etiquette is 7 strange table manners in France and around the world.

Below is an infographic on international business etiquette