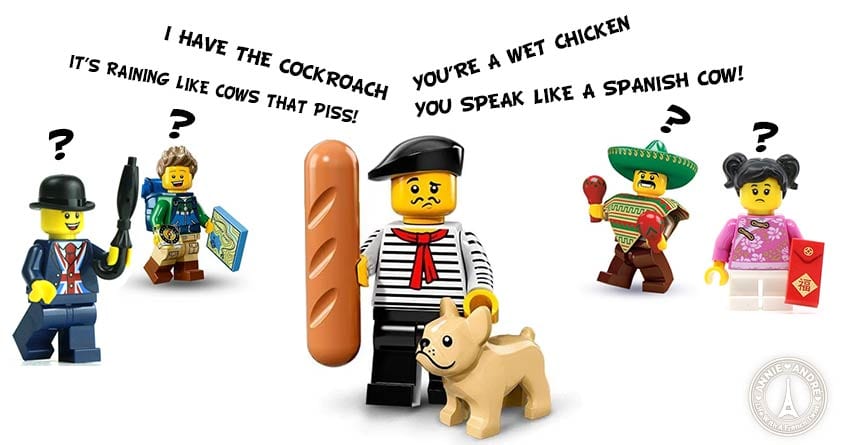 Do you “speak French like a Spanish cow?” Unless you’re a native or fluent French speaker, you probably have no idea what that means. Here are some funny French idioms and expressions involving animals and bugs explained: What they mean, literally and figuratively, and their equivalent idiomatic expression in English.

What is an Idiom?

Idioms are commonly used expressions and figures of speech whose meanings don’t always relate to the literal meaning of their words; especially when translated word for word into another language.

There are thousands of French idioms, too many to list here.

The colourful French idiom “It’s raining like pissing cows,” first appeared around the middle of the 19th century.

It vividly illustrates heavy rainfall by giving you a mental image of a cow peeing which is a lot, especially compared to humans and other small farm animals.

Is this a strange French expression?

Not any stranger than the expression, “it’s raining cats and dogs.”

Another French idiom that doesn’t mean what you think it does. Like the cow that pisses, a person that cries like a cow is someone who cries a lot.

Saying someone speaks French like a Spanish cow is an insult because it implies that the person speaks French badly, to the point where it’s difficult to understand and painful to listen to.

Example: Janet is learning French, but she still speaks like a Spanish cow. OUCH! So harsh!

4) When chickens have teeth

Just like the English expression “when pig’s fly,” this expression implies something that’s impossible or difficult to do or attain, but it can also mean that it will never happen.

5) To be like a hen who found a knife

Common barnyard hens are not known for their intelligence. So would a hen know what to do if it came across a knife as it was pecking away?

Using the French idiomatic expression that “a person is a hen who found a knife” implies that the person is clueless or has no idea what to do.

Get your head out of the gutter. This isn’t some raunchy French expression.

This old French idiom has been around since the 17th century, and it’s not very flattering. If you say, “stop being such a wet chicken” in French to someone, it’s like calling them a coward.

Everyone knows that chickens and hens are not known for being very courageous. They run away as soon as you approach them. But something I didn’t know was that some chickens and hens don’t come in out of the rain.

We needed a sheep idiom, so here it is

7) Let’s get back to the sheep

No, this isn’t some weird sexual reference involving sheep.

When you say, “let’s get back to our sheep,” it means you want to get back to the task at hand.

This expression originated from a fifteenth-century comedy called “La Farce de Maître Pathelin.” Guillaume brings two cases before a judge involving sheets and sheep. During the trial, Guillaume gets confused between the two different cases and ultimately confuses the judge too. The judge then tries to get back to the case about the sheep by repeatedly saying. “let us get back to the sheep,” “revonons à nos moutons.”

Five-legged sheep are extremely rare and difficult to find. And that’s exactly what this French expression means. If something is like a five-legged sheep, it means it’s impossible to attain, find or do.

9) He who steals an egg will steal an ox

Simply put, if someone is willing to steal a tiny egg, they’ll eventually steal the ox too.

This confusing French idiom means that you are very close friends.

11) Go from rooster to donkey

To go from rooster to donkey means that you jump aimlessly from subject to subject.

To put down a rabbit is a very common French idiom with a surprising meaning.

It means that you stood someone up without letting them know.

This French idiom might sound like the English phrase “Has the cat got your tongue?” However, it has nothing to do with it.

To give one’s tongue to the cat actually means to give up or throw in the .

Example: You’re in a car with the kids who ask “can you guess how many fingers I’m holding behind my back”? Before you can answer, they say, “Alors, tu donnes ta langue au chat? (do you give your tongue to the cat?). In other words, “do you give up”?

The French expression “call a cat a cat” means to speak your mind and truthfully.

This French idiom is a clever way to say that children resemble their parents in terms of personality and character.

16) To have other cats to whip

This oddly funny French idiom means that you have more important or better things to do.

Example: I can’t be bothered to do my homework; I have other cats to whip.

French idioms that BUG you!

17) To have the cockroach

When someone has the cockroach, it means they are very sad or depressed.

I found many explanations for how this French expression came about, but the one that interested me the most was the one about the Foreign Legion.

When bored legionnaires became depressed under their isolated conditions and would shoot cockroaches. Later this depression became known as “avoir le cafard”  (to have the cockroach).

Oh, stop looking for lice!!! This French expression means you complain too much or find fault in the smallest of things.

Dating back to the 17th century, people likened the involuntary burst of action from the bite of an insect to that of someone who was angry. So when someone is angry or in a bad mood, you can ask them what fly bit you.

Example: You’ve yelled at me four times now. What fly bit you?

This French idiom is very similar to the French expression “what fly bit you?” Except that this one implies someone is very angry for no good reason.

Merlan is the name of a popular fish in France. In English, it’s called whiting or hake fish.

If you’ve ever pan-fried a whole fish, you’ve probably noticed that the mouth is usually wide open, and the eyes look like white marbles that are about to pop out of their sockets.

Not a pretty sight, is it? Don’t worry; this is not some strange French fish eyeball recipe.

The French expression, to make fried Merlan eyes, means that you are looking at someone with ridiculously big sappy saucer eyes in an overly exaggerated way, usually looking up. Before the 19th century, this expression used to be to “make fried carp eyes,” probably due to the fact that it was a more popular fish at the time.

Wrapping up these funny French idioms

But learning French Idioms not only helps you sound more fluent in French but can also help you out in social situations.

They also give you a little insight into the cultural nuances of French life.