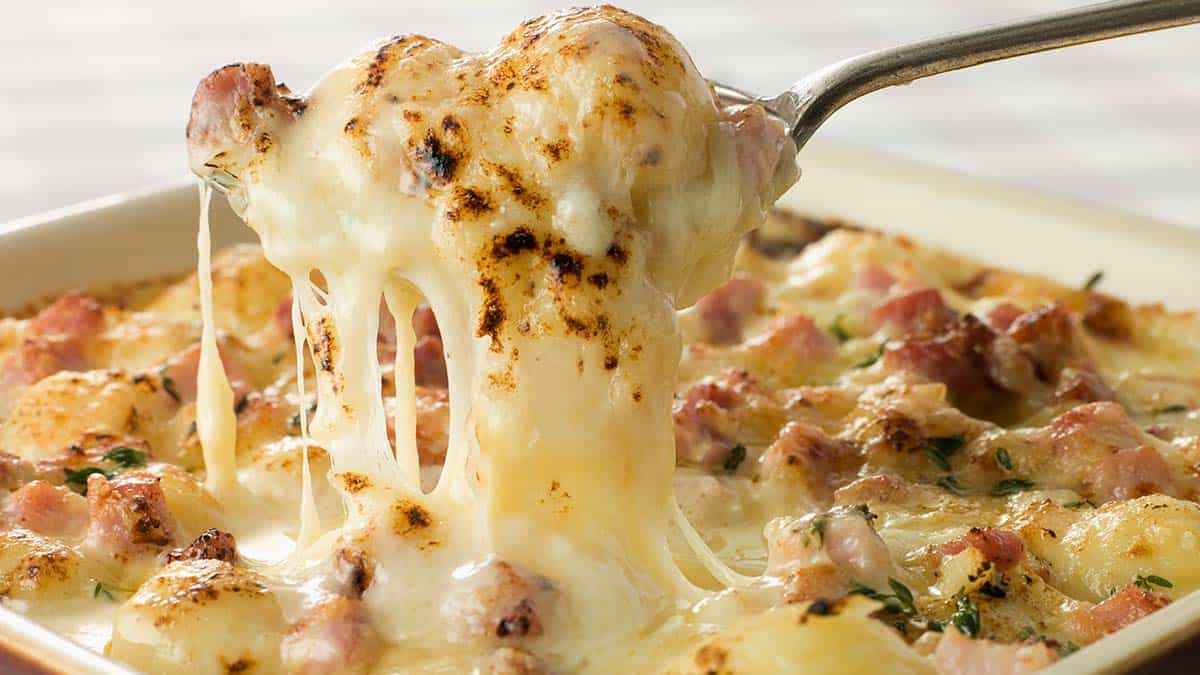 If you love French cuisine and casseroles, you’ll want to try some of these classic French potato casserole dishes.

Everyone loves a good casserole, especially a versatile potato casserole, which can be served as a side dish, appetizer or main course.

Potato casserole dishes are also relatively inexpensive and easy to make. They can be tailored to fit a variety of different tastes.

Best of all is that they can be made ahead of time, which makes them ideal for busy weeknights or entertaining.

I’ve round-up seven tasty French potato casserole dishes known throughout France that you may not be familiar with.

But first, let’s clear up the meaning of the French word “gratin.”

what does “Au gratin” mean?

In the world of potato casseroles, you often hear the term au gratin thrown around but do you know what “au gratin” means?

Au gratin is a French word that refers to dishes covered with breadcrumbs and or cheese and baked in the oven until golden brown or crispy.

For instance, in French, macaroni and cheese is called “gratin au macaroni” or “macaroni au Fromage gratinée” because it’s usually topped with cheese, breadcrumbs or both and baked. Without the cheese, it’s not a gratin dish; it’s just mac without the cheese.

Use a mandoline cutter.

Many French potato casserole dishes require you to cut the potatoes into thin slices.

I highly recommend investing in a mandolin cutter to get evenly thin slices of potatoes. It’s much faster than cutting by hand and ensures that all the potatoes cook evenly.

This classic French potato recipe is a specialty from the Dauphin region and goes by several names in French, including Pommes de terre dauphinoise” and “pomme de Terre à la dauphinoise.”

There is a multitude of dauphinoise recipes, but most usually consist of very thin and uniformly sliced potatoes (around 3 to 5mm) boiled in milk which is usually seasoned with garlic, nutmeg, salt and pepper.

The potato mixture is then placed into a casserole dish with cream and butter and slowly baked for around 40 minutes until the top turns crispy while the interior remains soft, thick and creamy.

Many cooks like to add cheese, eggs, bacon or even onions to Dauphinoise potatoes, but purists will tell you that if you add these other ingredients, this potato casserole is no longer potato dauphinoise, which leads me to the other recipes on this list.

Do you know what the difference is between potatoes au gratin and dauphinoise?

Most people call it Gratin dauphinoise, but as I mentioned before, some nitpicking purists say that if you add ingredients other than milk and cream, it’s no longer a dauphinoise and becomes something else. Either way, it’s just semantics.

Gratin Dauphinoise almost always calls for Swiss cheese, the generic name for several varieties such as and . You have to remember that cheddar cheese is not a commonly used cheese in France.

Gratin Savoyarde is a variant of the gratin Daupinoise dish, but the cream is replaced with a broth.

Originally from the Savoy French Alps, Julia Child’s featured the Gratin Savoyard recipe in volume 1 of her cookbook Mastering the Art of French Cooking.

The cheese used for gratin savoyard is usually from the region: , or Beaufort.

Bakers potatoes, from the French word Boulangères (baker), is a classic French potato dish made primarily of thinly sliced potatoes, onions, butter, broth and various seasonings such as parsley, rosemary or laurel leaf. Some recipes include white wine.

Supposedly, It’s called baker’s potatoes because, in the past, this dish was left to cook in the baker’s oven early in the morning before going to work in the fields. The potatoes are left to simmer for hours, taking advantage of the residual heat from the baker’s oven.

Tartiflette is a relatively new French potato dish from Savoy invented in the 80s, which has become very well known throughout France.

Tartiflette is made with chunks of potatoes, diced onions, and lardon, which is similar to smoked bacon cut into matchsticks, creme fraiche, salt, pepper and cheese.

The cheese round is usually cut horizontally in half and placed on top of the potatoes, rind side up, and baked.

Reblochon is a soft, unpasteurized French cheese with a strong flavour produced mainly in the mountains of Haute-Savoie from cows’ milk and it gets its name from the French word “reblocher,” which means “to pinch a cow’s udder again.”

Unfortunately, since Roblechon cheese is unpasteurized, it’s unavailable in certain countries like the United States.

Some alternatives to cheese you can use include, Tomme de , , morbier, or cheese

What makes this dish specific to Normandy is that it calls for from the Normandy region, which is cut horizontally and placed on top of the potatoes with the rind side up and baked.

This delicious potato casserole is made by stacking a whole bunch of super thin slices and potatoes on top of one another in a small mould, such as a muffin pan or small cake pan and baking it in the oven.

Make sure you use a mandolin to get the perfect ultra-thin potato slices.

The flavours in this dish come from the butter, garlic and different herbs and that you can use.

Some variations of Mille Feuilles de pomme de Terre include using bacon, leeks, or green onions instead of just herbs.

By adding cheese to the recipe, it becomes an au gratin potato stack.

Potato casseroles are great during the holiday meals

Because potato casseroles are easy to make and can be made ahead of time, they are great dishes to serve for family dinners or holiday meals such as , Christmas or even easter. They also make great leftovers.

What is a brasserie, bistro, café & what’s the Difference? A France dining guide