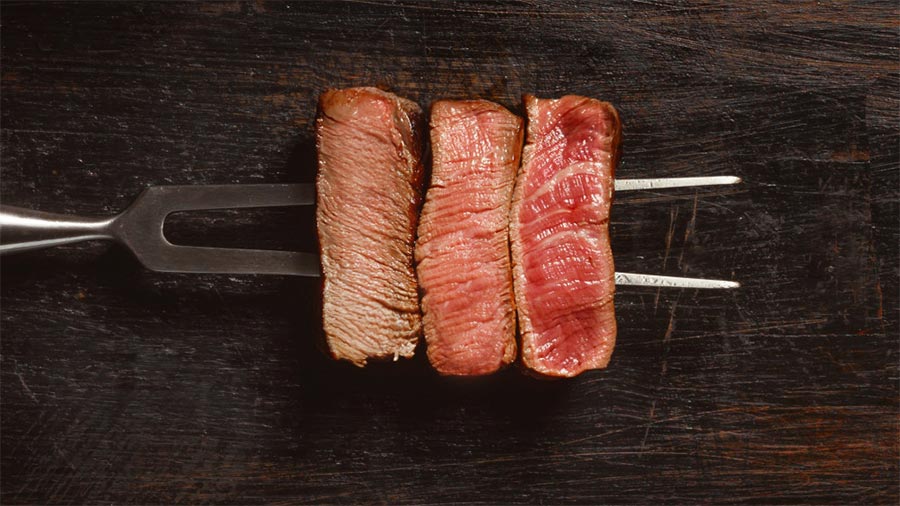 Do you know your steak levels of doneness in French? From rare steak and well-done steak to seared ahi tuna steak, here’s a quick guide to help you order various types of meats the way you like them in France.

How to order a steak in France cooked the way you like it!

In English, there’s a standard scale of five different temperatures or levels of doneness for cooking steak (and sometimes other meats) that chefs and steak eaters use.

There is also a sixth called Blue in English, but it’s not a popular choice in the English-speaking world.

For instance, a well-done steak is thoroughly cooked with no pink or red and has an interior temperature of at least 158F or 70C.

No matter how streamlined this scale has become, cooking meat to your desired level of doneness isn’t an exact science.

In a busy kitchen, chefs aren’t standing over their stoves with a meat thermometer or colour chart to ensure your steak is cooked at the exact temperature that falls somewhere on the doneness scale. It’s mainly done by time, colour and sometimes by touch.

There are also differences in how to define the degree of doneness of a cooked piece of meat which can vary by person, region and country. Rare in one country, for instance, might be considered medium-rare in another country.

There are 4 main steak temperatures in french (levels of doneness)

In France, eating steaks or any meat where you can order how much or little it’s been cooked is similar to English, but there are differences.

The 4 steak cooking levels in France and their English equivalents are:

Did you notice that there was no term for “medium” or “medium well ” steak in French?

FYI, In French-speaking Quebec, the beef cooking terms are similar but not exactly the same as they are in France.

You may hear these beef cooking terms in restaurants in Quebec.

Below is an in-depth explanation of each French cooking level term for France.

Read to the very end to learn other cooking-level terms in French that you might come across on a French restaurant menu in France.

Ask for your steak to be cooked “bleu” ( French for blue) in France, and you’ll get an extra blood rare steak, one step above steak sashimi.

Although there is a term for this level of doneness in English, it’s called “blue rare steak,” it’s not as common in the US or the UK as it is in France.

Another way to describe rare blue steak is “à peine saisi” /Ah-pen-sayzi/, which roughly translates to “barely cooked.” You can also use this term if you want your ahi tuna seared rare, but you would never ask for your ahi tuna cooked “bleu.”

Times can vary by cook and by the thickness of the steak, but in general, a rare blue steak is seared for as little as 10 to 30 seconds on each side in a very hot skillet over high heat as long as the inside remains cool and essentially raw with a core temperature that does NOT get above 50°C, about 113F.

Because ordering a blue rare steak doesn’t get a chance to cook long enough to melt the fatty marble of a steak, the meats used for this temperature are usually lean cuts of meat, not fatty ones.

In other words, people like to order rare blue steak, which needs to be low in fat, because it stays tender and retains more of its moister and flavour.

Is it safe to eat extra rare blue steak?

Some countries don’t recommend eating rare or raw meat because it may contain pathogens. But most of the pathogens or parasites don’t penetrate dense beef. So once the outside is cooked, a very rare steak should be perfectly safe to eat.

Use your best judgment.

Another aspect of eating pathogen-free meat, rare or raw, is to eat meat from beef that’s been mainly grass-fed. Cows have evolved to digest the nutrients in grass, but that’s not true for grain-fed cows. A mostly grass-fed cow that’s spent its life in pastures will have a healthier immune system and pose little threat to people who like eating rare or raw meat.

French consumers consider meat with hormones unhealthy and possibly dangerous, which is one of the reasons giving hormones to animals for meat production is outlawed in France and the European Union. France does not import US meat that’s been fed hormones or growth antibiotics.

Why is an extra rare steak called bleu (blue)?

Some French online sources said a very rare steak is called blue because the meat has a slightly blue tint.

However, according to the Larousse Gastonomique, an encyclopedia mainly about French gastronomy, “cooking au bleu” was originally a method of cooking Freshwater fish, especially trout.

This nearly forgotten method of cooking trout au bleu got its name from the scales, which turn a bluish colour when they come in contact with vinegar, one of the ingredients for the recipe. Somehow, this cooking term may have become tied to a rare blue steak.

Are the two terms related? I have no idea.

A rare steak in French is steak “saignant,” which literally means bloody steak.

A steak saignant is cooked slightly longer than a rare blue steak, but it’s still relatively rare. 75% of the interior is red with a thin charred crust, and the flesh is still tender and juicy.

Magret de canard, which also has low-fat content, is usually ordered saignant or medium rare. Magret de canard is the duck breast from a Moulard duck raised for its liver (foie gras.)

Depending on the thickness of the meat, each side should be seared for about 60 seconds to 1 minute and 30 seconds in a scorching skillet over high heat. The core temperature should reach about 50 to 55 °C   (122° to 131°F)

If you want to order a medium rare steak, you’ll need to ask for a steak “à apoint.”

“Cuit à point” means “cooked just right,” as in perfect and figures somewhere between medium-rare to slightly less than medium. The interior is not fully cooked and has a slightly pink interior or rosé colour.

Steak is usually seared over high heat; then the temperature is lowered and cooked for about 1 minute 30 seconds per side. The core temperature does not go above 60°C, about 140F, which is at the highest end of medium rare.

There is no medium or medium well steak in French

In some English-speaking countries, the next level of doneness would be medium or medium well, but that’s not the case because the next level is well done.

If you want to order a well-done steak in French, you’ll need to say “bien cuit,” literally well cooked.

Bien cuit or well done is probably the least popular way for steak eaters to order their meat in France. The interior is fully cooked with no pink visible.

You’ll often hear French people complain that the well-done meat is too tough, too dry and that it’s lost all its favour.

Sometimes cooks and steak lovers compare this level of doneness to the sole of a shoe.

Depending on the thickness of the meat, each side is cooked for several minutes until cooked through. The core temperature is 70c (160 F) or more.

Don’t ever ask for your steak “bien fait”

In addition to bleu, saignant, à point and bien cuit, there are other French cooking levels for different types of meat and fish. Here are a few you may come across on a French menu in France.

Rosé is a term used for larger cuts of meat such as roasts, lamb and white meats such as pork, veal and poultry.

In some parts of France, people do use the term rosé for steaks which figures somewhere around medium depending on who you talk to.

If you see the term “mi-cuit,” which means “half-cooked” or “semi-cooked, it’s a term generally used to describe the level of doneness for certain types of fish such as seared ahi tuna, aka tataki tuna.

Seared ahi tuna figures somewhere on the doneness scale between rare and medium-rare, depending on the cook.

But we’re not done yet.

Mi-cuit is also a baking term for cakes cooked with a soft gooey center. For example, a molten chocolate cake is called mi-cuit au chocolat.

The French word for pan, as in frying pan, is une poêle /pwell/.

If you see poêlé(e) on a French menu, it means that something has been pan-fried. Technically, anything cooked in a pan is poêlé, and you’ll usually see this word as part of the directions in a recipe that requires pan frying.

Sometimes dish names include the word pan-fried poêlé(e) to describe the dish. For example, a popular dish in France, especially during the holiday season, is poêlé which is basically a thick piece of pan-seared seasoned with salt and pepper.

Ordering a steak à point or a hamburger saignant in France doesn’t have to be complicated. Just remember, there are four basic ways to order how well done or rare you would like your steak and magret de canard cooked in France.

Example dialogue for ordering a steak in France.