How long does it take to learn French? Why you may never speak French fluently 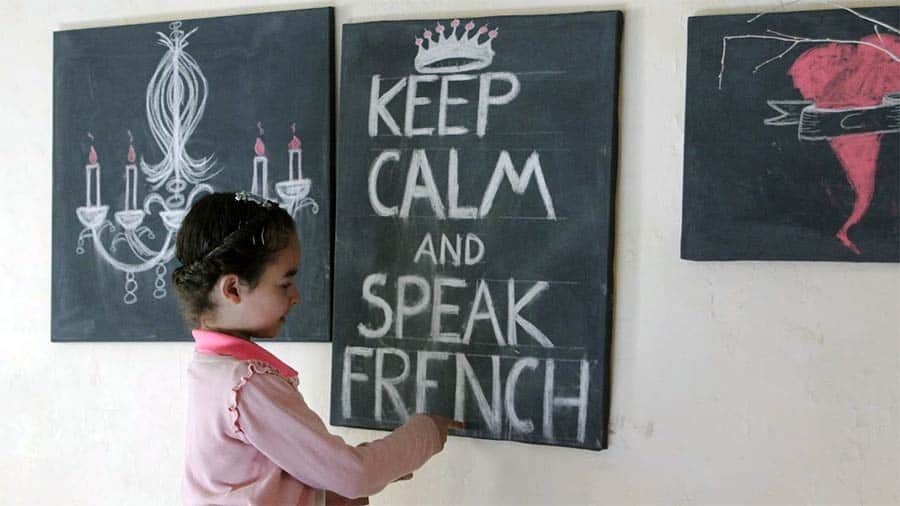 How long does it take to learn French? There are so many things to consider, like age, where you live, how much you practice, and what you consider fluent.

The answer is: It can take you anywhere from 6 months to six years to learn to speak French.

Everything I’m expressing in this article is based on my experience and observations.

How Long Does It Take To Learn French fluently?

I receive dozens of emails every week from parents who are considering moving to France or taking a one-year family sabbatical in France and wonder how long, if ever, it will take them or their children to achieve French fluency.

I always find this question extremely difficult to answer because it’s like asking how long it will take you to train and qualify for the Olympics or play the piano.

Anything’s possible if you put your mind to it, provided you have the aptitude and put in the time to make it happen.

So yes, theoretically, you could learn to speak French fluently, but most people rarely take the steps necessary to achieve that level of proficiency.

Like a professional athlete, you have to put in the work and train like there’s no tomorrow, but you also have to do the right kind of training to achieve your goals. Even then, sometimes your best isn’t good enough. But that shouldn’t stop you from trying.

Malcolm Gladwell invented the concept of the 10,000-hour rule, based on researchers’ findings who believe the magic number to become a true expert at something is 10k hours.

If we apply this thinking to learning a language, it means you could theoretically learn to speak French fluently after 10k hours by studying and practicing:

So, studying 4 hours per day every day means it would take you 6.8 years to learn French fluently.

Don’t worry; the 10k-hour rule that Gladwell coined is an average number and doesn’t really apply to language learning.

The thing about languages is you don’t have to speak fluently or perfectly to communicate.

How long would it take you to memorize, retain, and learn to use those words in a sentence?

Many studies show that memorizing a word can take 30 to 50 seconds.

However, you need around ten exposures to each word over a period of time for that vocabulary to enter your long-term memory.

There are lots of tools that can help with spaced repetition, such as Brainscape online flashcards and Pimsleur, the online language learning course.

Is it possible to learn french in 3 months / 6 months?

A lot of language learning sources say it could take you anywhere from three months to six months to speak passable French.

There are many, maybe too many variables, to accurately predict how long it would take you to learn French.

What’s your definition of fluent?

Another factor in learning French and getting close to fluent is the word itself.

What do you consider fluent? Near perfect? Conversational French?

Do you know what speaking fluent French looks like?

“Fluency” is a subjective term.

For the purposes of this article, let’s define fluency as the following:

Some tips for learning French

Practicing more French grammar is not the key to French fluency:

While learning the basics is great, there is a point of diminishing returns where learning more vocabulary and grammar doesn’t necessarily translate to speaking more fluently or understanding more.

If there’s too much emphasis on studying more, especially grammar, instead of practicing what you already know, you’ll end up knowing a bunch of grammar but have no idea how to use it or pronounce things.

When I say practice, I mean actually speaking because there’s a big difference between writing and speaking.

When you write, you can see the word spelled out and take your time. Then you might hear that exact phrase and have no idea what the other person is saying.

It’s like looking at a recipe or a photo of a recipe vs cooking it and eating it. Speaking is fully sensory.

There are so many different ways to learn a language. And believe it or not, you can actually achieve a good degree of spoken fluency without even studying grammar.

Learning a language naturally, learning whole expressions and spoonfuls of a language in context, will get you further than just learning grammar.

How do I know this? Well, think about it, babies do it, and so do children.

If you ask a child who has never studied grammar which of the above two phrases is correct: a native speaker will recognize automatically that the first one is the correct way but can’t tell you why.

They just know intuitively which one is the correct one.

The best way I can explain this concept is through my own experience raising bilingual children.

My daughter is nearly perfectly bilingual in French and English. She’s lived in France practically her entire life and has only gone to French schools.

Even though she’s never attended English schools or studied English grammar, she can speak English fluently. How did she do this?

We maintain a “one-parent-one-language” home, also known as “One Person One Language” (OPOL). OPOL is a bilingual parenting approach where one parent or caretaker speaks to a child in one language, and the second person speaks in another language to the child.

So although she speaks French at school and at home with me, speaking English with her father daily has been enough to allow her to become fully bilingual without understanding grammatical rules.

Here’s another example when I lived in Japan:

When I moved to Japan, I kept hearing certain phrases over and over again.

By the end of my first week living in Japan, without ever having picked up a grammar book, I knew what these and many more phrases meant.

I also picked up a phrasebook and memorized chunks of phrases that I thought I would need in practical situations, such as “how much does that cost?”. “Where is the bathroom?”

As I memorized the phrases, I would use them repeatedly. I learned the patterns of the language intuitively and could swap in new vocabulary to the phrases I memorized.

Pimsleur is really good at reinforcing this method of learning through active listening.

Like the athlete training for a marathon, if you don’t practice and train enough, you’ll never reach the level of fluency you want to attain.

The first year we lived in France, my son Kieran surpassed Andre’s French fluency because he put more effort into studying French after school.

By the end of the second year, Andre surpassed Kieran’s French level. Not by studying more but by hanging out and talking with his French daily, during and after school. Kieran continued studying but didn’t make as much progress as Andre by studying the traditional way, with books.

If it’s not a necessity or you’re not interested in French, you won’t progress very quickly.

In general, people are more motivated to learn a language when it’s a necessity or if they are genuinely interested in communicating with others for travel, experiencing another culture or for personal reasons.

It’s not a theory; I’ve seen this happen time and time again, where families who move to France are afraid their children will suffer or lose their English if they put them in a French school. In my experience, nothing could be further from the truth.

This is why I tell parents who plan on moving to France with their children to put their children in a French school right away. That way, they’ll have no choice but to speak French and progress much faster.

I have another really interesting example involving a friend here in France who is an Anglophone married to a French person.

My friend, whom I hope never reads this article, is married to a French man and speaks French to her husband.

My friend speaks English to her children. However, the children respond in French to her, not English. As a result, they can understand English but speak pretty poorly because they don’t practice speaking French.

Why? Why don’t the kids reply back in English?

If their mother didn’t speak or understand French, the children would have no other choice but to respond back in English if they wanted to be understood.

I know this because that’s what happened to us.

My daughter, who is bilingual and living in France, had no choice but to speak English to her father because he did not speak French at the time. As a result, she uses both languages daily.

You stick with your ex-pat friends who only speak English with you (or your home language).

Foreigners who move to a foreign country sometimes stick with others who speak their native language rather than make local friends. How long do you think it will take to learn French if you don’t practice it daily? Answer; a really long time, maybe never.

I’ve seen it, especially with retired people who move to France.

You think having an accent means you’re not fluent

Generally speaking, studies have shown that learning a  language before you’re 15 improves your pronunciation in that foreign language.

On the flip side, just because you’re 30 years or older doesn’t mean you can’t gain a bit of French fluency, either. It just means you might have to work harder to become fluent, and you will most likely have a thicker accent than your younger counterpart. But that’s ok.

I know plenty of Anglophones, Spaniards, Germans, Dutch and even Vietnamese people living in France who speak grammatically perfect French with thick accents.

Look at Antonia Banderas and Gerard Depardieu. They have accents when they speak English, and most people would find it charming.

One last thing. If you don’t live in France, or you’re studying French on your own and have no one to converse with, start watching some French films or look for movies on Netflix that are dubbed in French and turn on the English subtitles.

You can also head over to Youtube and watch some videos made by French creators. Another idea is to watch exercise videos in French, like yoga. Yoga instructors typically speak very slowly.

Listening to French , of a book you’ve already read in your home language, is an excellent way to get in some good listening practice.

You already know the story, and as you listen, your brain will have an easier time making connections with the meaning of each phrase in context with the story.