I arrived in France with 3 school-aged children in 2011 and had to learn how to manoeuvre the French school system pretty quickly.

Within two weeks of arriving, I had successfully enrolled one child in preschool, another child in middle school and my eldest in his first year of high school.

I still can’t believe I was able to do it so quickly, considering how much red tape and paperwork was required for not one but three children. Not to mention, I didn’t have a good grasp of the French school system yet. I had to keep a notebook with me at all times so I could keep track of all these strange-sounding grade level names and new terminology that made no sense to me; livret de famille, CP, CM1. etc.

Somehow I made sense of it all. Now, after over a decade of dealing with 13 different schools in 3 different French cities, I know the French school system like the back of my hand.  And thanks to my eldest son, I now know the French University system in France too.

Before we dive into the nuts and bolts of the French school grade levels, let’s go over some small but important details about the French education system in France, which is handled by the ministry of education.

I won’t be covering any higher education university grade levels, only preschool through high school, but I will go over the diplomas offered and needed to enroll in French universities.

The school year begins the first week of September and ends in late June or early July.

The beginning of the school year which is called back to school in English, is called “La rentrée” (literally re-entry).

2) School is mandatory by age 3  (punishable by law)

Education in France is mandatory for anyone between 3 and 18 years old. It consists of primary and secondary education, which can be broken down into four subgroups that I detail below.

Any parent who fails to enroll their child in the French education system or an education establishment can receive a fine of €1,500 to € 7,500 with possible imprisonment of up to 6 months.

Technically, students can stop attending school at 16, but if they do, they must get some formal training until they turn 18, such as an apprenticeship, professional integration or civic service. This training is handled through Les missions locales (French gov source)

Public education is free from the age of 3. Private schools in France can cost anywhere from a few hundred euros per year to 16k a year which is considered very expensive. The vast majority of private schools are catholic schools which can cost around 1K to 3k per year and are the most affordable private school options.

All public schools are secular in France, and as of 2004, all religious symbols are banned; crosses, hijabs, yamukas etc. This law doesn’t apply to private schools whether they’re under contract with the government or not.

As of 2018, cell phones are banned on all school campuses for students and must be turned off and put away.

Homeschooling was never easy in France and was highly regulated. But as of 23 July 2021, a new law was passed that makes it nearly impossible. Homeschooling in France is now only authorized for health, disability, artistic or sports practice, homelessness, or remoteness. There’s a transition period planned until the 2024-2025 school year for families who have been homeschooling.

Getting held back a year is called Le redoublement scolaire

France has a reputation for holding children back in school. Some studies estimate that 22% of children (about 1 in 5 kids)  have been held back at least once by the time they turn 15.

That’s an improvement considering 30 years ago the numbers were closer to 50%.  As of 2018, a new law restricted the number of times a child can be held back in primary school to one time and secondary school one time. Additionally, parents must agree to the school’s decision to hold their children back a year.

The French school grade level names are a little confusing if you didn’t grow up with them.

Rather than numbers that increase sequentially as they do in some countries, each grade level has a name that is often abbreviated and combined with numbers that go up and then down. It drove me crazy at first, but you get used to it after going through the system with your children.

After primary school, students between the age of 11 to 18 move on to secondary school, which is also divided into two stages, collège and lycée ( middle school and high school). 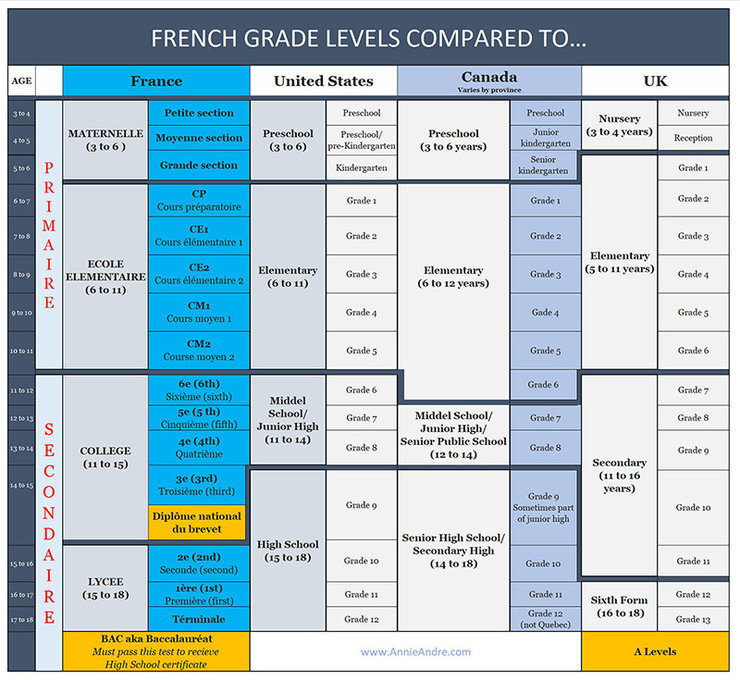 All children in France must attend école maternelle beginning at 3 years old for a total of three years; however, some schools offer an optional preschool class for 2-year-olds as long as the child is ready and potty trained. (Students need to have turned 3 by 31 December to enrol in the following school year.)

Rather than numbers, preschool sections are called little section, middle section and big section. The optional 2-year-old program is called very small section. See the table below for actual names in French. When speaking to other English-speaking parents, you shouldn’t translate them to English but should use the French names: Petite section, Moyenne section, and Grande section.

Sometimes maternelle grade levels are abbreviated in documents but rarely, if ever, when speaking, they are TPS, PS, MS, and GS.

Maternells is a blend of childcare and education and prepares children for entry into primary school. Preschoolers typically learn to read, write, numeracy, learn creative and artistic activities and a foreign language at a very basic level.  Here’s a more in-depth article about  French preschool / maternelle

The first year of primary school is a transition year called cours prépatoire, but nobody uses this term in everyday conversation. Instead, it’s called CP /Say-Pay/, which is the abbreviation of cours prépatoire.

The following two years are called Cour élémentaire 1 and 2, but again, nobody uses this long name. They are referred to by their abbreviations CE1 /Say-Uh-Unh/ and CE2 /Say-Uh-Dewh/.

In primaire, children learn to write, develop their reading skills and are introduced to science. There is a greater emphasis on core subjects such as French and math and less time given to the arts and creative subjects. Children spend a lot of time memorizing poems and texts.

After primary school, children change schools and move onto middle school (unless they were held back.), which is called Collège /KO-Lezjh/. Collège is the first stage of secondary education.

In order to say these grade levels so that people will understand you, you’ll need to know how to countdown in French. See table below.

Students need to score 400 or more on the test to receive the Brevet diploma. However, failing the test doesn’t mean students won’t graduate and move on to high school. The Brevet is more of a rite of passage that prepares students for future tests during their school years and to get a snapshot of the child’s abilities at this age.

The grade levels in Lycée are a continuation of middle school and countdown from 2nd, 1st and the final year of high school is called terminale.

Like middle school students in lycée have to sit for a nationally administered exam during their third and final year of high school to earn their diploma, which is called BAC, short for baccalauréat.

In the French education system, students have to choose which type of lycée diploma they want to pursue, which are all very different.

Sometimes referred to as a classic or traditional education, students work towards earning a general diploma or technology diploma.

In the second year, students specialize and choose the focus of studies they want to pursue a) Bac géneral or b) Bac technologique.

As of 2021, because of the education reform, students no longer have to choose to specialize between Literature (L), Economics & Social Sciences (ES) and Science (S). The system now more closely resembles the US High school general education, where students can choose electives.

If a student chooses the technology route, they have to choose between 8 different paths from various sectors of activity.

If you’re interested in learning more about a Bac general et technologique, this site has some good information (in French).

Separate from General and Technological Lycée is a type of vocational high school called lycée professional.

Not all vocational degree choices are available at one single school, and students often have to move to attend the school that has the training they are interested in pursuing. In this case, it’s common for children to live in student housing during the week and return home on the weekends.

Once a student passes and earns their Bac Pro, they can choose to enter the work field or continue to higher education degrees within their field of training.

There’s another diploma that students can earn in a Lycée professional which requires only 2 years of school. It’s called the CAP (Certificat d’aptitude professionnelle). There are over 200 CAP programs to choose from such as, security gard, sign makers, cosmetology, barber, etc. Students cannot continue on to higher education with this diploma and usually enter the workforce.

Students Must Take An Exam To Earn Their HighSchool Diploma

No matter how good a student’s grades are, students don’t receive their Bac (diploma) automatically. All students must sit for the Baccalauréa exam, which is a comprehensive, nationally administered exam given nationwide at the end of the third and last year of lycée in Terminale. Napoleon introduced it in 1808.

A student’s entire education is geared towards passing this critical exam, and students who pass le Bac can continue to higher education. To pass the BAC, students need to attain an average of at least 10 out of 20 across a range of core disciplines or 50%.

You could compare the BAC to A levels in the UK and the SAT in the US.

Once you receive your BAC, it follows you throughout your life. 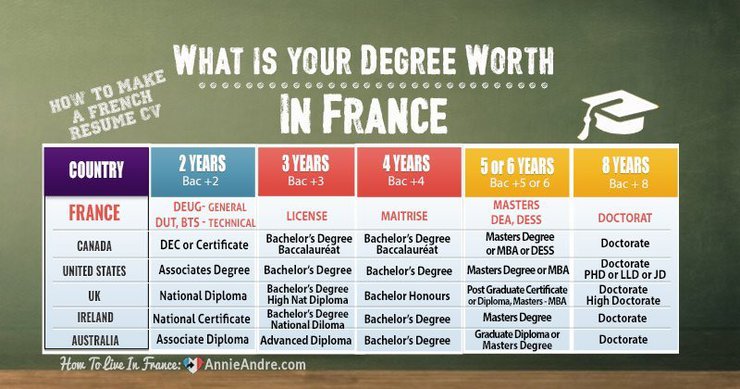 What if you fail the High School BAC?

Students who fail the BAC can repeat their final year “Redoubler” and retake the BAC the following year.

Or, students can take the BAC the following year as an independent candidate “candidat libre” without re-doing the year.

And finally, anyone can take the BAC early as long as they are 16 years or older.

That’s the French education levels in a nutshell.