Yes RSVP Is French So Why Can’t You Use It In France?🤷😲 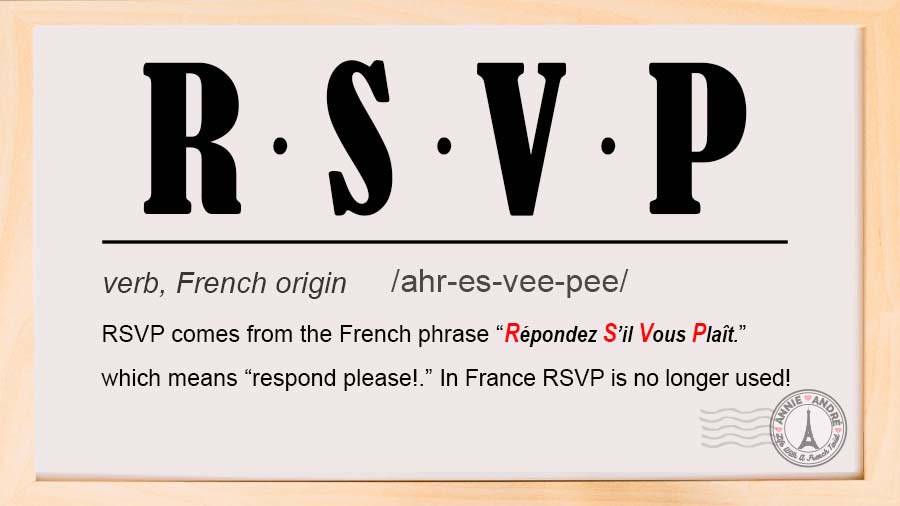 I was curious to learn why RSVP, a French abbreviation, isn’t used in France. Here’s everything you need to know, its meaning in French and English, its origins, how to use it and my embarrassing story.

RSVP Meaning in English and French!

If you’re reading this, you speak English, and most likely, you’re accustomed to seeing the phrase “RSVP” on birthday party invitations or wedding invitations. And you probably already know that you’re supposed to respond and let the host or hostess know whether or not you can accept their invitation.

Like so many English words, RSVP is a French word (in this case an abbreviation of a French phrase), adopted into the English language.

RSVP is an abbreviation of the phrase “Répondez, S’il VousPlaît

“REPLY IF IT PLEASES YOU,” but idiomatically, it means “PLEASE REPLY.”

I found out the hard way that, although it’s customary to respond to an invitation in France, no one uses the acronym  “RSVP” on invitations despite it being a French acronym.

In this article, we’ll explore how to properly respond to an invitation in France, why RSVP is no longer used and my embarrassing story.

STORYTIME: My confused French friends and the French invitation

Despite being an abbreviation for a French phrase, RSVP, has fallen out of fashion in France, considered old-fashioned— but I didn’t know that when I first moved to France.

One of my good friends in France asked me to create an invitation (in French) for her going away party. She and her family were moving to Russia for three years for a job opportunity.

I happily agreed and came up with the idea to make the invitation look like a postcard with five red Russian nesting dolls—one for each family member, including the cat.

I think the invitation turned out super cute! Don’t you?

As I created the invitation in Photoshop, my girlfriends looked over my shoulder, giving me annoying but welcomed feedback.

When it came time to type RSVP at the bottom of the invitation, one of my friends squealed in a high pitched voice, “mais qu’est ce que c’est ça, RSVP?” which could mean anything from “but what is this RSVP?” all the way to “What the hell is that, RSVP?”.

At first, I thought they were joking or pretending not to know the meaning of RSVP. It is, after all, a French abbreviation for the French phrase “Répondez, S’il Vous Plaît.”

It took me a few minutes to wrap my head around this simple fact.

I tried explaining to them how Anglophone countries use RSVP. Even in French-speaking Quebec, weknow the meaning of RSVP. Nothing I said clicked until I told them it was like adding “R” to “S.V.P.,” short for “S’il Vous Plait,” a well-known French acronym for the word “please.”

They were intrigued by the use of “RSVP” in the English language but said we shouldn’t use it on a French invitation because no one would understand what it meant.

I was a little embarrassed and irritated because I created two birthday invitations for my daughter and used RSVP the first and second years living in France and no one ever said anything to me.

How to ask people to RSVP in France

There are several ways you can request people to RSVP on French invitations. My friend asked me to type “Réponse avant le 30 Septembre”, which means respond before the 30th of September.

Here are six additional ways you can ask someone to RSVP on French invitations.

I like “réponse souhaitée” followed by my contact information- phone number or email. It’s simple and to the point. Not too formal and not too friendly.

Like all languages, French has evolved, and as a result, many French words and phrases are no longer used in modern French, or the meaning has changed.

RSVP is one of the many old French words or abbreviations in this case, which has fallen out of widespread use by most French people today.

Here are a few more examples of French words that have fallen out of popular use in France but are still used by French Canadians:

How did RSVP become part of the English language?

To understand how RSVP became standard on invitations and cards in English-speaking countries, you need to understand a little history.

In 1066, William the Conqueror of Normandy invaded England and defeated the English King Harold II at the Battle of Hastings. William has then crowned the first Norman King of England.

When William ascended the English throne, he spoke little to no English. Despite being of Scandinavian descent, William spoke a dialect of French, called Norse French, which he made the official language of the English court.

French remained the language of the English royal court for centuries and gradually blended with the Anglo-Saxon language— infusing it with new French words and giving birth to modern English.

The same thing happened to the Irish language which has a lot of French loan words borrowed from the French language.

RSVP begins to pop up on English birthday cards around the 11th Century:

RSVP, often written R.S.V.P. (with periods), eventually made its way onto English birthday cards and wedding invitations beginning later in the 11th century.

French was still considered high fashion among the elite of the English court, and speaking French showed your elite status.

This affinity for all things French continued in England for several hundred years then travelled across the Atlantic where it became fashionable among high society in the United States— using French words showed refinement.

This trend continued until around the 19th century. From this, RSVP and many other French words and phrases made their way into the English language and stayed despite it falling out of use and fashion in the French language.

And that is why RSVP is used in the English language but not the French language anymore.