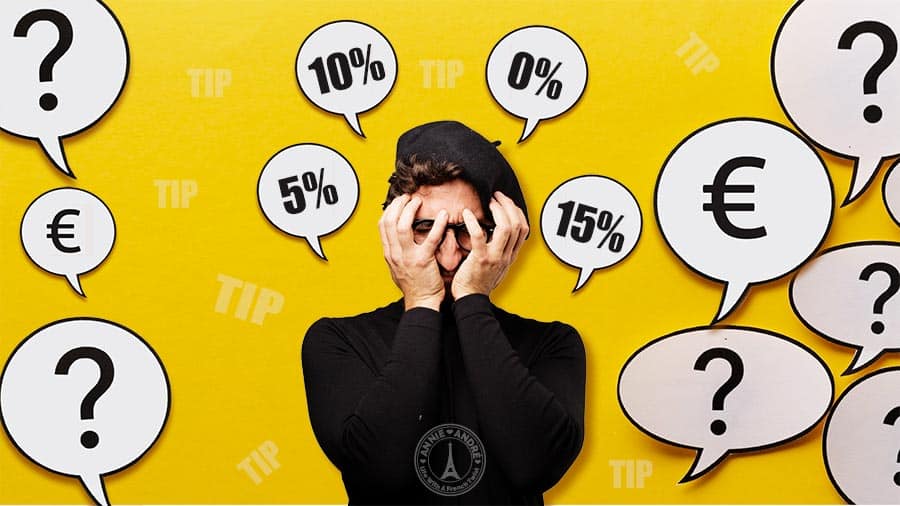 I used to be confused about French Culture In France Until I Moved Here.

Despite doing a ton of research, and talking with many French waiters and French Friends, I was still confused about French etiquette in France when I moved here with my family in 2011.

Tipping guides were not really much help either because they often gave conflicting information.

Some sources say isn’t necessary. Other guides say that in French culture, it’s customary to leave a small tip but not everyone seemed to agree on the rules or the amount you should tip someone.

What does that even mean? Do you tip in France or not?

All these discrepancies frustrated me because I just wanted to know the generally accepted amounts I should tip in France.

Now, after living in France for over a decade, and travelling extensively throughout France and Europe, I finally get it.

It’s the kind of knowledge you only get from living in France or having someone familiar with French nuances explain them to you.

Once you do understand, you’ll never have to rely on guides like this one again or feel anxious and confused when the server drops off your bill.

After you’ve read this article, head over to my tipping in France guide for suggested amounts to tip in France.

French Culture: Why Is So Random And Arbitrary In France?

Take everything you know about etiquette and forget it, throw it out the window. Au revoir!

It’s true, France is one of the many countries where you don’t have to tip.

Before you get too excited about not having to tip in France, there’s a but…

Although culture in France dictates that isn’t required or expected, it doesn’t mean the practice of doesn’t exist because it does.

Tips ARE very much appreciated by people working in the service industry in France, and you won’t insult anyone if you do decide to give someone a tip.

But culture in France is very nuanced, and nowhere near the standard 15% people often give in some countries like the U.S. and Canada.

That’s a hard pill to swallow for tourists visiting France who come from a country where is pretty much written in stone and engrained in their culture. I’ve seen it with my own eyes. When friends visit me from North America, they genuinely feel guilty not leaving a 20 percent tip.

Here’s where things get murky.

French people can’t agree on how much to tip in France either.

The most important thing to keep in mind regarding France’s culture is that it’s an arbitrary endeavour.

Everyone has their own equation as to who gets tipped and how much.

Go ahead, test this theory and ask ten people in France how much you should tip. I guarantee you’ll get ten different answers.

Unlike the United States and Canada, where a 15%  tip is generally accepted as the amount to tip a server, France has no widely accepted rules.

I’m speaking from personal experience. I’ve also asked my French friends, talked with wait staff in restaurants, and quietly spied on other patrons after they paid their bills. You could say that it’s been a bit of an obsession of mine.

The culture in France and the amount people leave as tips is very arbitrary and subjective.

Here’s a snapshot of what some French people think about .

Below are direct quotes left by French people on Quora about culture in France.

I translated their comments to English above the original answer.

We tip when the service given is “better” than normal.

In France, I don’t give any, and I have rarely seen any given.

Why all the confusion about French customs in France?

If all this sounds confusing, there are two logical explanations.

One of the reasons why people leave smaller tips in France or refuse to tip at all is because of a little thing called “Service Compris” (literally service included). The second reason is because of the salaries in France.

Service Compris is nothing more than a surcharge, usually 15%, that restaurants and cafes are required by law to add to the bill.

This surcharge is paid directly to the restaurant owner but indirectly it goes to the staff because it helps the owner pay for their salaries and benefits.

Because of this surcharge, some people believe they shouldn’t need to leave a tip at all.

How to know if there is a service charge?

The second reason people tend to leave smaller tips in France compared to other cultures is people in the service industry, including waiters, earn a liveable wage; thanks to the service charge.

Because workers earn a liveable wage, they aren’t as dependent on tips as their American counterparts, where servers can make as little as 2 or 3 dollars per hour.

How much do French servers make in France?

Waiters’ salaries are based on the minimum wage in the hotel and restaurant industry and a 39-hour workweek rather than the normal 35-hour workweek.

In France, any hours worked over the standard 35 hours are paid at a higher rate: overtime. French labour law stipulates that the initial eight additional hours of overtime are paid at an additional 25% premium on top of your normal rate of pay. Overtime beyond those hours receives an additional 50% premium.

Workers also have other benefits.

Everyone in France has health insurance, whether you work or not. And visiting a doctor is very affordable for the average person and costs around 25 euros per visit for a generalist. 70% of that doctor fee you pay to the doctor gets refunded back to you within days via an automatic ACH payment.

And, of course, the famous French vacation days. For every 30 days worked, employees accrue 2.5 days of vacation which they must use in one calendar year. They do not roll over.

So yes, restaurant servers and bartenders do make a liveable wage.

However, it doesn’t mean that they don’t appreciate the generosity of customers because minimum wage is minimum wage; it’s not a large sum of money.

Tips in France used to be more common, and people used to leave larger tips.

Before minimum wage laws, many French professions relied heavily on tips to supplement their income, and to some extent, people did leave larger tips than they do now.

Geoffry, a 37-year-old manager who has been in the restaurant business in France for over 15 years says, “customers used to regularly give 15% to 20% tips but today it’s barely 2% to 3%.” (source Parisien)

Some professions didn’t even earn a salary and relied solely on the generosity of their customers.

Many of these professions no longer exist, such as turd scrapers (décrotteur) who scraped the poo off the of pedestrians and boot shiners (Cireur de bottes), who were often young children.

Even Coco worked for tips before she became a famous fashion designer when she sang with her aunt at café concert halls.

Here’s why your French server might say the tip is not included even if you think it is.

I’ve heard some tourists complain about French servers, who, when asked if the tip is included, will say no. This confuses some people because they see that a 15% service charge was added to the bill.

How to ask if the tip is included in the bill

You:
Is the tip included in the price?
Le pourboire est inclus dans le prix?

Server:
No the tip is not included:
Le pourboire n’est pas inclus.

A server might say the tip is not included because a tip (POURBOIRE) is technically not the same as a service charge (SERVICE COMPRIS).

Origins Of the French Word For Tip

The French word for Tip is POURBOIRE.

It’s pronounced \Poor-Bwar\ which means “for a drink” or “for drinking” Pour + Boire.

“For a drink” is the French word?

There’s a lot of lore about the origins of the word pourboire and how it became the French word for tip.

Some believe it comes from an old custom and expression used in the past when customers would give a few coins as a reward for a particular service and say:  «Here, to drink to my health!», “Tenez, pour boire à ma santé.”

But it’s not just France. Several other European languages also use a drinking term for the word tip.

Head over to my Guide

Now that you understand how nuanced is, head on over to my tipping in France guide below.