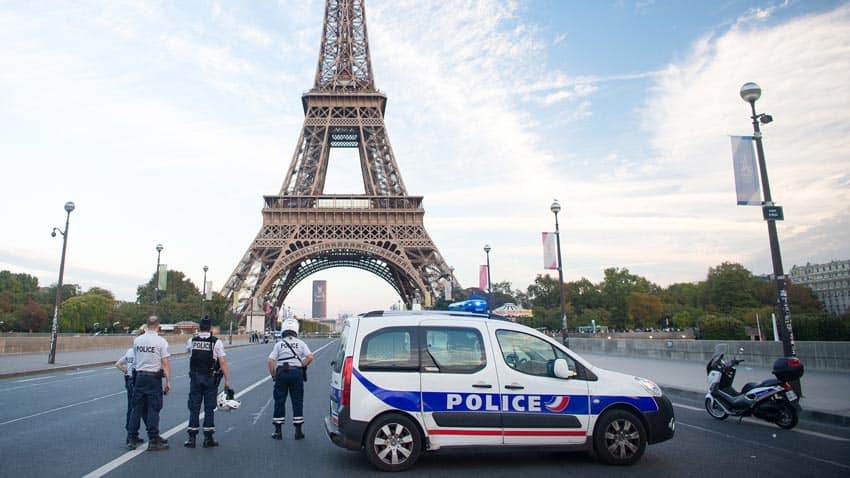 What is 911 in France? Sorry, but if you need emergency assistance, dialling 911 in France won’t work. Here’s a list of the four most important French emergency numbers in France, plus a quick guide on which one to call and what to expect. Make sure to input them into your phone or memorize them.

Emergencies happen when we least expect them, and they need fast thinking.

If you’re in an emergency situation while travelling abroad to a foreign country, you’ll need to know how to contact an ambulance, the police department or even the fire department. But different countries have different emergency numbers.

Many countries, such as the UK, Canada and the United States, have a single emergency telephone number that serves as that country’s universal emergency number.

Everyone in the United States and Canada knows you’re supposed to dial 911 in an emergency, but that wasn’t always the case.

Before the 1930s, there was no centralized or universal emergency number.

People had to dial 0 for the operator, or they had to figure out if they needed the police, the fire department, or medical help and dial the appropriate local number. Not easy to do when someone’s bleeding, being attacked, or their house is on fire.

If you’re from the US or Canada, you might be tempted to dial 911 in France.

Please don’t do it, and here’s why.

If you dial 911 in France on a fixed line, nothing will happen.

“SOME” mobile phones in France are programmed to redirect your call to a local emergency number of France, but not always. Phone manufacturers have to program a cell phone to work that way.

Nothing will happen if you have a mobile phone that is NOT programmed to redirect you to a local French emergency number.

Instead, memorize the local emergency numbers when travelling and or input them into your phone.

What is 911 in France?: 5 emergency numbers in France you should know!

All calls placed to an Emergency number in France (and Europe) are free, and they work 7 days a week, 24 hours a day. They should also work on mobile phones with no sim card and when locked.

Knowing which emergency numbers to call ahead of time could mean the difference between life and death.

France has three separate emergency phone numbers for three different types of emergency services, plus a fourth number that serves all of Europe.

114 is the SMS emergency number for the deaf and hard of hearing which I’ll explain at the end of this article.

112 is the universal European emergency number that works in France, throughout the EU and most European countries, the UK, and parts of Asia.

There are many more emergency phone numbers in France, such as suicide hotlines, poisoning hotlines, and child abduction hotlines, among others, but we won’t be covering any of those special hotline numbers in this article.

Let’s go over each emergency number and when to use them in France now.

If you can remember only one emergency number while travelling in France and the EU, make it 112.

Why call 112 in France instead of a local French emergency number?

Adopted in 1991, 112 is the European Union’s equivalent to North America’s 911 and the UK’s 999. The 112 universal emergency number is accessible free of charge anywhere in the European Union, regardless of whether you’re connected via a landline, payphone, or mobile phone.

Many countries automatically forward the 112 emergency number to local emergency numbers. For instance, in the US and Canada, 112 forwards to 911 on GSM carriers only, including AT&T and T-Mobile. Here’s a complete list of all countries where you can dial 112.

French people have been discouraged from using 112 within France as a replacement for dialling 15 (medical aid), 17 (police rescue), or 18 (fire department).

In a 2018 survey, only 39% of people polled in France even knew that 112 existed or that they could dial 112 anywhere in Europe. French people are more familiar with America’s 911 than with 112.

There have been rumblings about pushing 112 as France’s single emergency call number to eliminate confusion, something that has already happened in Sweden, Denmark, Finland, Romania, and Holland. However, some are against a single emergency phone number. They argue that having separate numbers for emergency services provides a faster, more targeted response.

What to expect when you call 112

Once you have a 112 operator on the phone, in addition to explaining the emergency, you may have to tell them who you are, your address, and your phone number if possible.

Will the 112 operators speak English?

The 112 operators may or may not speak English, depending on the country.

According to the European Commission digital single market website, calls can be answered in 40 languages thanks to interpreters. I haven’t tested this because it would be unethical to call 112 in a non-emergency situation just to see if it was true. This brings me to my next point.

If you’re in Holland, where many people are fluent in Dutch and English, yes, someone will speak English. In other countries, such as France, the 112 operators may not be able to speak English.

Here are some examples of emergencies.

If you think you can remember the local emergency telephone numbers in France, the theory is that you will get a faster response time rather than calling 112.

SAMU is the Urgent medical aid service you dial in France If you have a medical emergency.

The SAMU dispatch centre is a team of doctors and assistants who answer field calls and determine the best course of action.

Examples of when to dial 15 to get a hold of SAMU.

If you need to see a doctor on a Sunday, a bank holiday or during hours when doctor offices are closed, you can dial 15 and request a “Medicine de Garde” in your area.

You can also look for a local doctor on duty yourself by contacting SOS Médicins.

SOS Médecin sends doctors directly to a residence instead of sending an ambulance. They operate 24/7 and work closely with the public French emergency services (ambulance, fire brigade, hospital).

Each area has a different number. For instance, here are the numbers for doctors on duty in Paris.

Here is a link to the SOS Médicin website to locate a doctor in your area of France. You’ll have to make an account. Once you have an account, you can also download the app onto your phone.

You can call the fire department for medical emergencies, to report a dangerous situation, or a traffic accident involving people or property. Firemen in France have even saved a few cats.

When we first moved to France, a little boy around ten years old had a bad fall down a hill on his bike. A bunch of people, including myself, rushed to his aid, but I was astonished when a woman yelled out for someone to call the fire department, who showed up about 15 minutes later.

Examples of when to call 18 for the French fire department

If you need to report a crime or emergency, you can contact the France police by dialling 17

In France, the police are responsible for maintaining public order and safety.

Dialling 17 puts the caller in contact with the emergency police services nearest you, which can either be the Gendarmerie Nationale or the Police Nationale.

According to the the official French government site, you should dial 17 or 112 in case of a terrorist attack!

If you have a non-emergency situation, Do not dial 17. Instead, look up the phone number of the nearest police station, “le commissariat de police or gendarmerie.”

You can reach this unique French emergency number via SMS or Fax. Who uses fax anymore?

When a caller sends an SMS text to the emergency number 114 on a mobile phone, the call will get redirected to the national relay center at the University Hospital centre of Grenoble.

Callers can also talk to someone via video call and communicate through sign language.

I can see this number being useful in a situation where you can’t talk. Such as if you’re choking or hiding under a bed when there is an intruder, and you don’t want him to hear you.

How much does a medical emergency cost in France?

Medical services in France and the EU are free to anyone who is part of the French healthcare system and to Europeans with a valid European Health Insurance Card (EHIC), so remember to take it with you when travelling. The EHIC card will simplify the paperwork and help you get refunded for any public health care expenses.

For anyone not from the EU, you may be charged if you are transported by an ambulance or emergency vehicle. Fees vary, but they won’t be in the thousands. You’ll need to contact your travel insurance company to see what your health insurance will cover and how to get reimbursed.

The same is true if a doctor on duty / SOS médicin makes a house call. Fees range from 35 euros to 85 euros for a visit, depending on the time of day. For example, house calls are more expensive after midnight than house calls made in the afternoon.

Wrapping up Emergency numbers of France

Here are the emergency telephone numbers in France again.

112 works anywhere in France and the EU.

If you would rather call the local French emergency services directly for faster service, dial 15 for medical emergencies, 17 for police and 18 for fire the fire department.

And remember, don’t rely on dialling 911 in France because chances are it won’t work.