Adventures In Moving: How To Decide Where To Relocate Your Family 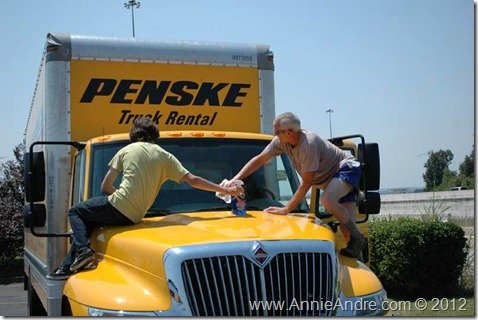 This is a guest post by my husband Blake.

Before we decided to take a family sabbatical to live in France, we thought we would settle somewhere on the east coast. We went through the whole moving process from start to finish from the west coast to the east coast. This is a very high-level look at how to decide Where To Relocate Your Family. Things you should consider whether you are relocating your family across the country or to the other side of the world.

We rented 2 huge Penske trucks, left our home in the San Francisco Bay area, and planned to settle clear across the U.S. in the Boston area.

We never ended up settling in Boston. Instead, we left our stuff in storage and lived semi-nomadically with friends and family up and down the east coast while we homeschooled the kids and waited for the French Embassy to approve our visas.

It worked out great because when the embassy finally approved our visas in September of 2011, we packed what few clothes we had and left in less than 2 weeks.

Want to move someplace different? It’s easy! Just do this…..

Easy, yes? No, not at all. Annie already covered some related move topic in her recent post about downsizing your book collection, but I’ll be coming at it from a slightly different point of view. In this post, I will address how we decided to move to the Boston area.

Deciding where to live

Ask twenty people the best place to live, and you’ll get forty different answers. There are a number of factors that go into deciding where your next home could be.

Do you want to be near family? Are there jobs that align with your current or future career? What is the cost of living? Are you looking for something urban, suburban, or rural?

Coastal or inland (sometimes described as saltwater or freshwater)? Love the cold? Hate humidity? If you have kids and aren’t rich, how are the public schools? What about the junior colleges and state universities? Our research, thinking, analysis, and tea leaf reading lead us to the Boston area.

Annie has close relatives in Montreal, western Quebec, Ontario, and New Brunswick. I grew up in Alexandria, Virginia, and went to the University of Vermont.

My siblings live with their families in Maryland and Virginia, and I have good friends up and down the East coast. Boston was not super close to any one of these, but it was a lot easier to see everyone. And at least we’d all been in the same time zone (except for those outliers in New Brunswick!).

Jobs are another big factor in determining where to relocate your family.

Although Annie and I wanted to strike out on our own, we thought it prudent to be near a source of jobs if things didn’t work out. We both worked in high tech. Outside Silicon Valley, the main tech hubs in the United States are Seattle, Austin, North Carolina, and Boston.

These are all fine places to live, but after you’ve lived in the Bay Area for a while, you might be more inclined to Seattle or Boston rather than Austin or North Carolina. Boston was the home of early microcomputer software hits such as VisiCalc and Lotus 1-2-3. Although not the powerhouse that Silicon Valley had become, it clearly still had much to offer.

Cost of living, housing, and schools

A key metric on how to decide where to relocate y our family is figuring out the cost of living.

There are several cost of living calculators and comparison tools out there. We used this cost one at Sperling’s website and found it generally useful.

An important cost difference between San Francisco and Boston was the cost of homeownership. As a percentage of one’s salary, homeownership was significantly less in Boston (significant means 30-50% less). Of course, you must also figure in what your new salary might be (about 15% less in Boston over San Francisco for my field) and what additional expenses your new home might require (Sorel snow , snow blower, snow tires, snow shovels, a lot of Advil, followed by contracting with a snow removal service). Depending on the city you decide to live in, you may be prone to more home improvements from Summit Point Roofing, and that is something to take into consideration.

While the advent of the internet has not yet meant the complete demise of real estate agents, there are some great sites you can use to help better understand home costs. Trulia, Zillow, Movoto, and Redfin are all useful real estate websites; you can spend hours surfing the web for homes to buy.

The rental market was a little harder to get a feel for (at least remotely), but you can start with everybody’s favourite, Craigslist. For schooling, most states would be an improvement over California. If you want to start with the big kahuna of school testing score, start with the NAEP. Since we already knew we were interested in Boston, I used a few commercial sources to help narrow down the neighbourhoods.

In our case, I started with an article from Boston magazine, which no longer exists, but it listed out schools by best and worst, then used Great Schools to winnow out more information. Most big cities have some sort of lifestyle magazine, and these will have annual school rankings, which can help you with your search.

Family, jobs, and cost of living were the main drivers in making Boston our choice, but there were a number of secondary criteria that were also important.

Moving is hard, ask any survivor.

I grew up in an Army family, and we moved a lot. It was worse for my older sister, who tells about moving fourteen times in her first fourteen years.

Fortunately, our father’s moved frequency dropped as his career advanced, and all of us kids were able to attend the same high school.

But the point here is you must also weigh the disruption to your children against your new home’s future benefit.

I have no calculator to offer you for that one, but if you find one, let me know and post it here. Still, under the right circumstances, a move can be a great thing. Good luck! I hope you enjoyed this article.