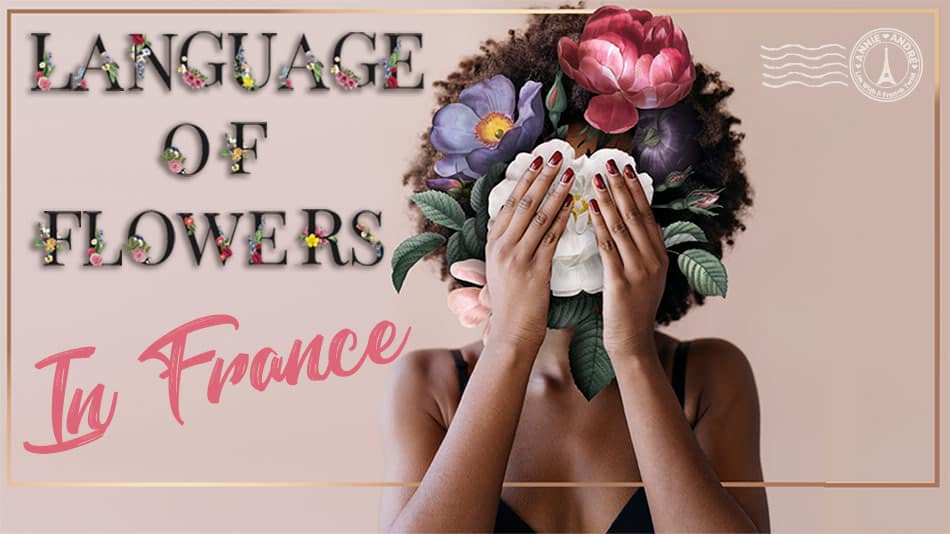 tags: French culture, french tradition, language, language of flowers, strange, strange customs
Have you ever wondered where the meaning of flowers comes from and why they mean the things they do? Discover the meaning and history of floriography and how the French played a hand in popularizing the meaning, symbols and language we assign them.

We all understand the flower language to a certain degree without realizing it.

How else would you intuitively know not to give your mom black roses for mothers day because it implies something ominous like hatred, death, and despair?

But have you ever asked yourself, “why does a beautiful bouquet of red roses on valentines day signify love? Why not black roses?

In my quest to be a better, more thoughtful flower giver, I discovered a whole new language using flowers that dates back thousands of years.

What is the “language of flowers?”

From passion and purity to love, jealousy and death, plants and flowers have their own special meaning and symbolism, which can also be influenced by their colour.

By combining different flowers with different colours in a beautiful flower arrangement or a bouquet, you can communicate hidden messages to the trained eye.

France played a big part in popularizing the language of flowers we use today to express different sentiments and messages.

The hidden meaning in a wedding bouquet:

When the Duchess of Cambridge (Catherine Middleton) chose the flowers for her wedding bouquet for her marriage to Prince William, she chose flowers with varying but special meanings.

This tradition of selecting flowers with special sentiments and meanings for wedding bouquets has been a tradition for thousands of years.

For instance, the ancient Egyptians carried fragrant herbs and to ward off bad luck.

“It wasn’t until the 1800s that we see the birth of the wedding bouquet as we know it today.”

The lost art of communicating with a bouquet of fresh-cut flowers.

In the 1700s and 1800s, people lived in an ultra reserved society with super strict social rules. Good manners meant flirting, and expressing your feelings overtly was frowned upon.

The idea of sending a sexy secret code in flowers without saying a word was appealing. It allowed star-crossed lovers to discreetly communicate romantic desires, sentiments and secret messages through their specific floral choices. Tee hee hee.

The Flower symbolism craze took hold of France around the mid-1700s.

To send secret floral messages, you first chose your flowers and placed them in a tiny handheld vase that could be attached to a dress like a corsage or held in your hand.

By the 1730s, Paris jewellers advertised these vases as  “Porte-bouquets” (bouquet holders). They were small gold and silver tubes lined with glass vials that could then be lined with sponges or moss to keep flowers fresh (source).

The flowers also functioned as a type of deodorant, masking the unpleasant odours of life and body.

The porte-bouquet fad caught on in England a little later in the 1700s or early 1800s, but the tiny handheld flower vase was called a tussie-mussie. From there, it spread to other European countries and eventually the USA.

That practice of sending special messages through flowers eventually faded around the beginning of the 1900s.

Today, people tend to choose flowers based on appearance, colour and beauty. And no one walks around holding a small bouquet anymore, except at prom or weddings.

The sentiment and meanings of flowers aren’t always universal

Like all forms of communication, the language of flowers has changed over time and can vary by country and culture.

There can also be multiple symbolic meanings attached to flowers.

For example, the daffodil or jonquil from the Narcissus genus is a plant associated with several themes in different cultures.

Who invented the language of flowers?

Assigning meanings to flowers isn’t a new concept, and although the English probably coined the term floriography, they didn’t invent it.

Different cultures have been associating different meanings and symbols with flowers and plants for thousands of years.

So no one really invented it. It just keeps reinventing itself. Everything old becomes new again.

However, the French were the first to formalize and popularize the language of flowers by publishing Flower language books in the late 1700s and early 1800s. It created a whole new genre.

A Brief history: How floriography reached Europe From Turkey with love:

Most historians agree that the floriography fad of assigning meanings to flowers as a way of communicating was most likely introduced to Europe by Aubry de la Mottraye and Lady Mary Wortley Montagu, both of whom lived in Turkey in the 1700s at different times.

While living in Turkey, both Aubry and Lady Mary learned about a secret and very clever coded language game called “sélam” (“hi”).

Although the secret Turkish harem language of sélam’ is not exactly like the language of flowers today, it did give repopularize to the idea of saying something with flowers rather than words.

In sélam, Harem girls assigned symbols and meanings to flowers, fruits, and objects, which replaced actual words and phrases to convey a secret message when placed together.

A harem member would send a message to a lover made up of flowers and other objects wrapped in a handkerchief. The receiver would then decode the message based on the words that rhymed with the objects.

1727: Aubry de la Mottraye was a Frenchman who lived in Turkey while in Exile and published his findings in 1727

1763: Lady Mary Wortley Montagu was the wife of England’s ambassador to Turkey and lived in Constantinople from 1715 to 1718 who became fascinated with the Turkish language and culture, particularly of sélam. Lady Mary was a prolific letter writer and wrote a series of letters home describing the people and customs in turkey, including the coded language sélam of harems.

Flash forward 45 years. Shortly after Lady Mary died in 1763, all her personal letters were published and became known as the Turkish Embassy Letters.

How French Flower Dictionaries popularized the meanings, we attach to flowers.

In the 1700s, lavish gardens and Flowers in France were already important in high society. The wealthy elite and royalty always had a beautiful garden to entertain and take leisurely strolls. That’s why majestic castles such as the palace Versaille always had lavish gardens.

However, the floriography craze of sending messages through flowers hadn’t really caught on yet.

There was also no formalized rule book that told people what each flower signified. It seemed to be passed by tradition or word of mouth. Similar to how you know that a red rose symbolizes love.

These charming and compact flower books were a cross between an almanac about plants and flowers, a dictionary of flowers and their associated meaning, floral poetry, prose, fables and natural history. They were coffee table-worthy and usually very compact so that they could be carried around.

Finally, there was a guide that people could use to send flowers which could also be used to decipher the meanings of flowers bouquets.

The most famous of these French flower books was “Le language des fleurs”(the language of flowers), published in 1819 by Louise Cortambert under the penname of Madame Charlotte de la Tour.

Her language of flowers book contained flower illustrations and 300 sentiments and symbolic meanings of flowers and plants based on classical literature and Celtic and Eastern traditions.

Although she was not the first French author to write about floral symbolism in communication, her book circulated to all four corners of the world. It helped kickstart the floriography craze that inspired other countries to publish their own floriography books.

Famous authors would use flower symbolism in their writing.
William Shakespeare, Jane Austen, Charlotte and Emily Bronte, novelist Frances Hodgson Burnett, and many others, all used flower dictionaries.

British and American floriography books often made changes to the French flower dictionaries.

Floriography: An Illustrated Guide to the Victorian Language of Flowers
$19.99 $12.99

Flower Illustrations are beautiful, with thick pages. Describes the origins and meaning of each flower and makes suggestions for pairing it with other flowers.

After the success of Charlotte de La Tour’s flower dictionary, there was a flurry of copycat books in other countries. However, the meanings of flowers were not always consistent, and flower meanings were sometimes changed.

For example, sometimes, Roman Catholic symbols were replaced. The passionflower might be changed to “superstition” instead of the religious meaning of “faith.”

Today, an orchid usually means thoughtfulness, refinement, fertility, beauty, charm, and love. In ancient Greek culture, giving someone an orchid was the equivalent of sexting an eggplant emoji.

The tuberose, which was the Persian symbol of voluptuousness, became “purity, peace and innocence.”

Are you interested in learning the meanings of certain flowers popular in France? Read this: