The 17,000 Mile Bike Ride On The Longest Highway In the World With Ten Year Old Kids 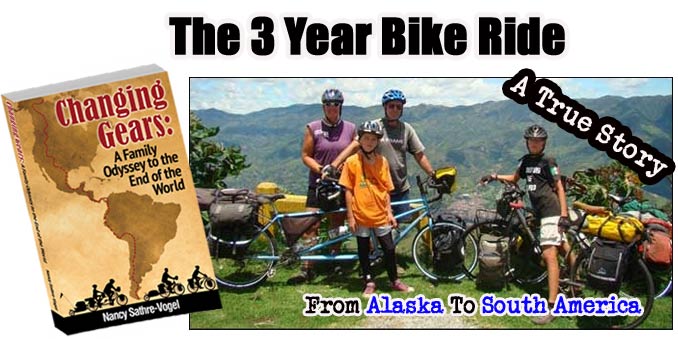 tags: cross country biking
When was the last time you did something that scared you? Something that was entirely out of your comfort zone? I’m not talking about painting the walls in your bedroom hot pink or eating at that dicey Mexican joint down the street with questionable meat. I’m talking about doing something of epic proportions- life-changing!

In June of 2008, Nancy and John Vogel, two school teachers from Idaho, set out on a journey with their ten-year-old twin boys, Daryl and Davy, to be the first family to cycle the Pan American highway. (The longest road in the world which goes from Alaska to the very tip of South America)

For three years, the Vogel’s pedalled 12 to 15 days a month, 4 to 6 hours a day using nothing but their bikes and pure leg and feet power the entire 27,300-mile journey that would take them through a total of 15 different countries.

Along the way, they did and saw some fantastic things.

They had a true-life family adventure that tested them both physically and emotionally.

They Must Be Crazy!

When I first heard of the Vogel’s back in 2011, I thought they were crazy to drag two ten years old kids on such a long and physically challenging bike trip.

The more I read about the Vogel’s, the more I realized they weren’t crazy at all. Although I did not know them personally, their life resonated with me very deeply.

They Led A Pretty Normal Life

They worked hard as school teachers for years saving money for retirement like everyone else.

Every day before heading off to teach other peoples children, they dropped their own two sons off at daycare.

They chauffeured their kids to and from after school sports and activities. They cooked dinner, pinched their pennies and pretty much lived like the average family would.

The one defining difference that separates the Vogel’s from most is that they decided to take the road less travelled and acted on their seemingly impossible dream despite their fears, despite the naysayers,  despite going against the grain of what society considered “NORMAL.”

If going against the grain makes them crazy, then I want to be insane too.

How Did They Pay For The Trip? They Must Be Rich.

I know what you are thinking. They quit their jobs to cycle for three years. They must be loaded and rolling in dough.

NOPE!  Nancy and her husband John, are long-time school teachers. I don’t know a lot of rich school teachers, do you?  They aren’t t trust fund babies either.

They Did It The Old Fashioned Way.

Their trip was possible using a combination of years of savings and rental income. You can read in more detail about how they made it financially happen by reading this article, Nancy wrote called “How To Afford Long Term Family Travel.

How Much Gear Did They Carry?

The Vogels had a total of 3 bikes between the four of them. Nancy and Davy rode single bikes while John rode a tandem bike with their other son Daryl.

They filled each bag with clothing and other items that they needed for all four seasons, including sleeping bags and winter jackets for when the temperatures dropped below zero.

They also carried a small stove and pot for cooking and occasionally had to carry a few days’ worth of food for the longer hauls when they would be out in areas where there were no other humans.

School For The Boys

To keep the kids on par with their peers, Nancy and John road-schooled their kids. Road schooling is a term used to describe children who are home-schooled while travelling long term.

The boys each did mathematics, wrote journal entries, essays and researched the areas they passed through. If they had the time, they also did earth sciences.

Where Are They Now?

The Vogel’s completed their 17,300-mile journey on March 21st, 2011, when they arrived in Ushuaia in Argentina, often regarded as the southernmost city in the world (pictured above).

They are now back in Idaho, where they are enjoying a different type of adventure that is until they decide to go on another adventure.

What Would You Do If You Were Not Afraid?

If you are interested in learning more about this family’s incredible journey from Alaska to Argentina, you can read their book called “Changing Gears: A Family Odyssey to the End of the World” written by Nancy. The book chronicles her family’s adventure from start to finish.

I guarantee by the end of the book, you’ll be inspired, humbled and in awe of what they did. So much so that you might go out and do something that scares you.

All photos used are the property of the Vogel family.

What do Twinkle, Twinkle, Little Star, The Alphabet Song, and Baa-Baa Black Sheep have in common? They all use the same catchy tune borrowed from an END_OF_DOCUMENT_TOKEN_TO_BE_REPLACED

Whether you want to avoid stereotyping, or you’re looking for unisex or gender neutral names for a little boy, here are nearly 200 softer, more feminine END_OF_DOCUMENT_TOKEN_TO_BE_REPLACED

Whether you want to break down gender stereotypes or you’re looking for boyish girl names for tomboys, I’ve put together a list of over 130 unique, END_OF_DOCUMENT_TOKEN_TO_BE_REPLACED

If you’re searching a French name that sounds good in French and English you’ve come to the right place. I’ve compiled a list of over 400 END_OF_DOCUMENT_TOKEN_TO_BE_REPLACED