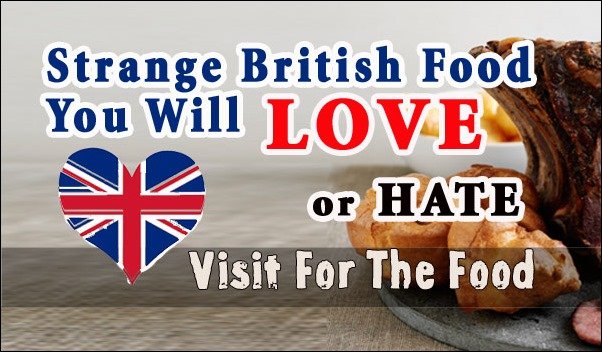 Try the in France, the Curryvurst in Germany or the Padthai in Thailand. But what the heck do you try in the U.K? A country whose food is often described as bland, heavy or unremarkable?

10 Weird Traditional British Foods You May Or May Not Love But Gotta Try:

Some people travel to visit museums, castles and tourist attractions without giving the local food a second thought.

To others like me, it’s the food that draws me in.

Travelling wouldn’t be complete without experiencing the unique and memorable food found in the places I travel to because more often than not, the local food tells me as much about the local history and culture as the tourist spots do.

I’ve put together 10 dishes from Great Britain which you will probably find weird.

Many have funny names or look unappealing but each one has a a fascinating story behind it.

In the least you owe it to yourself to try these traditional dishes on your next trip to the UK.

No this isn’t some terrible sexually transmitted disease that you need to go see a Doctor about.

Sometimes called spotted dog, the name(s) alone make this dish sound like some weird British food when in fact it’s nothing more than a steamed sponge pudding (cake) with raisins or currants, flour, sugar, milk and Suet.

Suet is  Britain’s version of lard or animal fat for cooking. It is the fat found around the kidney and other organs in animals used in pastry, steamed puddings and minced meat pies.

Why Is It Called Spotted Dick

The raisins and currants are what make this Dick spotted (hee hee). I found conflicting information regarding the “DICK” part of the name.

Some sources say the word dick is either a colloquial word for pudding or an antiquated word that meant hard cheese.

Where Can You Get Spotted Dick

You can pretty much find spotted dick on the desert menu of many restaurants.

Only now when you see it, you won’t be scared to order it.

You can also get canned spotted dick to bring home to your friends. Watch them giggle as they read the name on the can.


Haggis is the national dish of Scotland and a trip to Scotland without trying haggis is like not trying in France.

Once you find out what goes into haggis, you’ll really think food in Great Britain is weird because the main ingredients sound more like  the parts of the animal you would throw out rather than put in your mouth.

Haggis’s main ingredient is called sheep’s “pluck” (sheep throat, lungs, liver and heart) which is chopped up and combined with oats, onions, suet (animal fat) and .

The whole thing is mixed and stuffed into a sheep’s stomach and then boiled in water for a few hours.

If you can get past the “what’s in it” part, you’ll find that it’s actually quite good.

It has a peppery and nutty flavour and it’s texture is crumbly and somewhat crunchy not gooey at all.

Where To Eat Haggis:

Haggis is everywhere but look for it on your plate when you order a traditional Scottish breakfast.

Here is another traditional dish with an unfortunate name. Not quite as bad as spotted dick but still evokes dirty images in my mind.

There is no Scotch and no Woodcock in this dish. A woodcock is actually a bird.

It’s all topped off with a pinch of cayenne pepper.

It’s actually quite nice and the thin spread of anchovy paste gives it a slightly salty taste that is not fishy at all.

Where Can You Get Scotch Woodcock?

This dish dates back to the Victorian times when it was served at the end of a large meal!

These days most people eat it for breakfast, brunch or as a light snack.

It’s not quite as popular as it used to be so you won’t find it in every breakfast house but you can ask.

You don’need to go to England to try this because it’s so easy to make.

There no bread in this traditional Welsh delicacy.

Laver bread is actually made with Laver seaweed which is found on the western coast of the British Isles.

It grows on beaches where rocks are embedded in sand.

The best way to describe laver bread is it’s green, slimy and looks like boiled spinach.

Where can you find laver bread?

You can find laver bread in different forms in local restaurants. One popular way you’ll find it served is in a traditional welsh breakfast where it’s mixed with fine oatmeal then rolled into little cakes and fried into crisp patties with eggs, bacon and cockles (clams).

Two Words, Fish and Pie. Apparently, this dish has fallen out of favour in the UK because many of my British friends had never heard of this dish. .

Hmmm I wonder why?

Could it be because this Cornish delicacy looks unappealing and weird with a bunch of  fish heads poking out of the crust?

This dish is originally from the fishing village called Mousehole in Cornwall.

The legend behind this strange looking dish is that on the 23 of December, Tom Bawcock went out on his fishing boat.

Despite horrible stormy weather and difficult seas, he caught enough fish to feed the entire village.

The fish were baked into a pie and the heads were left poking out to prove there were actually fish inside.

The fish literally look like they are staring up at the stars, hence the name “Stargazy Pie”.

His actions saved the town from starving and ever since,  Tom Bawcock Eve festival is held on the 23 of December in the small town of Mousehole.

What is in Stargazy Pie?

The original recipe had seven different types of fish baked into the pie but these days Sardines are used. (In the UK Sardines are called pilchard).

Usually chopped eggs, potatoes and onions are in the pie also.

The heads are left poking up so all the delicious fish oils flow back into the pie which gives the pie a fuller flavour and keeps it moist.

Where can you get stargazy pie?

This fishy pie is mainly eaten around Christmas time especially in the town of Mousehole but you can make some stargazy pie if you like too. It’s not really that hard at all and actually pretty tasty.

Here is a lovely recipe for Stargazey pie for you to follow. Let me know how it tastes.

I absolutely love Yorkshire pudding and I am absolutely positively sure that you will too.

But don’t try to eat this as a desert because Yorkshire pudding is NOT a desert despite the word PUDDING. Or at least not the kind I am used to eating. You know the milk and sugar based pudding.

Puddings in the UK can be both savoury and sweet.

Where Can You Find Yorkshire pudding?

You can find Yorkshire pudding almost everywhere you can order a rib roast in the UK.

Toad in a hole is best be described as a distant cousin to Pigs in a blanket and there are no toads or frogs in this dish either, so relax.

What’s in Toad In A Hole?

Toad in a  hole consists of baking sausages in a flour and egg batter aka Yorkshire pudding batter.

Where can you find toad in a hole?

Typically this is something you would make at home with some onion gravy.

Like it’s cousin pigs in a blanket, it usually is a hit with the kids.

Yet another unfortunate name that does not really describe the food at all.

I mean look at the description on the box above. It just sounds wrong.

“YOU asked for it! Now with MORE sauce. Mr. Brain’s 4 pork Faggots”

Faggots are large meatballs made of organs and entrails (offal), usually from the pig.

I know it sounds gross and unless you grew up with it, you probably won’t appreciate the taste.

Where can you eat faggots?

Faggots were at the height of their popularity during World War II when there were heavy food rations.

These days, now that people are not FORCED to eat them, they have become less popular but you can still find them in some rustic restaurants, traditional butcher shops, open market stalls and in some supermarkets.

Mr. Brains (LOL),  is a popular brand that sells faggots in the frozen food section.

If you do decide to try them, a popular dish is “Faggots and Peas”. God that name is horrible.

Piccalilli is actually a British interpretation of Indian pickles.

India used to be a British colony and now some of the best Indian Restaurants outside of India can be found in the U.K.

Piccalilli is a relish of chopped, pickled vegetables. Recipe’s vary but in general they include cauliflower, mustard and turmeric.

It’s the turmeric that gives this relish it’s yellow tint.

It tastes similar to sweet pickles except it is tangier and less sweet.

It can be prepared so that it is larger and chunkier or diced smaller so that it can be more easily eaten as a bread spread.

Where can you find Piccalilli?

You can find Picalilli in most British supermarkets and there are loads of recipes online to make your own.

It’s usually served as a side or accompaniment to sausages, eggs, cheese, toast, and tomatoes.

Black pudding is yet another British name that kind of throws you for a loop.

Now before you shrivel away from this dish, you should know that blood sausages are eaten all over the world and if you have never tried it, you don’t know what you are missing.

Generally blood pudding in the UK is made with pigs’ blood,  pork fat, onions, oats, barley and various .

The mixture is cooked down until it’s nice and thick and then stuffed in a length of intestine.  It’s texture tends to be crumbly and mealy with an earthy aroma.

Where do you get black pudding?

Many breakfast houses in the UK serve black pudding as part of a full Scottish or English breakfast right next to your eggs and bangers.

You can also purchase ready made black puddings which just needs a gentle re-heating.

Then cut thick slices and gently grill them, fry them in a pan or warm them in the oven.

I prefer pan fried myself.

What Do You Think?

There you have it.  10 traditional and somewhat weird British foods you should try on your next trip to the UK.

Now when you see spotted Dick on the menu, you won’t wonder what it is.