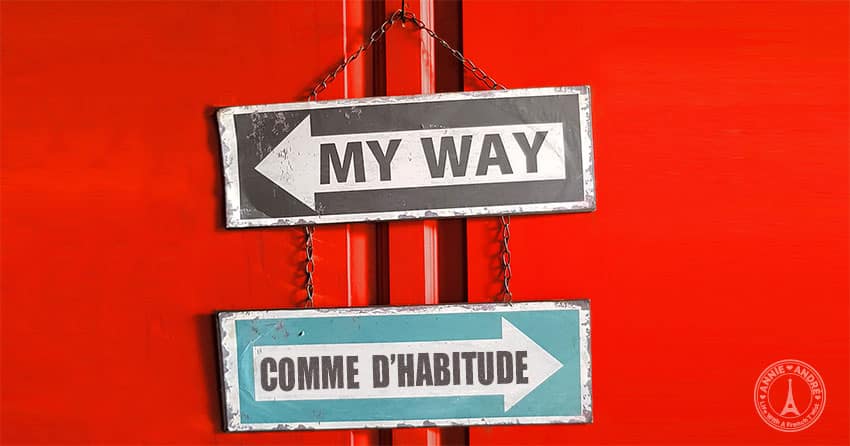 When most people hear the melody of the iconic song “My Way,” they think of Frank Sinatra. But, what most people don’t realize is that it was originally a French pop hit song. Here’s the fascinating story about “Comme d’habitude”, the original version of My Way.

Frank Sinatra’s song “My Way” Is A Cover Song

A cover song is a new recording by someone other than the original artist or composer of a song.

Not every song or musical hit was written by the singer that made that song famous.

It should come as no surprise then that Frank Sinatras signature song and one of the most requested songs played at funerals was written and composed by someone else.

What sets “My Way” apart from the other cover songs listed above is “My Way” was originally a French song and the original lyrics or subject matter were completely changed rather than translated.

If you’re French you know this already but if you’re not, this is probably news to you.

Who Wrote and sang Comme d’habitude?

In 1967, two years before Sinatra released his version of “My Way,” Claude François had just broken up with his girlfriend.

Her name was France Gall and she was also a singer.

Although they had a tumultuous relationship, and dated secretly for a while, they were deeply in love.

Claude craved fame and attention and was extremely jealous that France Gall’s rising star might outshine his.

So much so that in 1965, after France Gall won the prestigious “Eurovision Song Contest” singing “Poupée de wax, doll de son,” written by Serge Gainsbourg, Claude famously said to France, “You won Eurovision, but you lost me.”

They split for good two years later in 1967.

Claude liked it however he decided to rewrite the lyrics and put his relationship sorrows into the song and called it Comme d’habitude  (“As Usual” in English), earning him co-writer status.

Claude released the song in 67, not long after his break up with France Gall.

Who Was Claude François?

Claude, known as Cloclo to his adoring fans, was A Famous French Pop Star.

Although Claude François never had international fame, he was extremely popular in France in the ’60s and 70’s and is a legend in France today.

His concerts would attract swooning, screaming girls and many of his songs are still loved and adored in France.

In addition to Comme d’habitude, he wrote dozens of hits selling over 70 million records during his career.

Here are eight of Claude François biggest and most memorable French songs.

Claude died in freak accident in his bathrub

Sadly, in 1978, at the age of 39, just 15 years after his first hit record, Claude died in a freak accident when he was electrocuted in the bathtub of his Paris apartment.

At the time, he was still topping the music charts with millions in sales and performing to large audiences.

Some have compared his popularity in France to that of the Beatles.

CHECK out the 2012 movie titled «Cloco My Way», based on Claude’s life and rise to fame in France.

It should be available on Netflix; if not, check Video or Youtube Video.

Comme D’habitude is about a dying relationship.

Although the melody of Comme d’habitude is the same as Sinatra’s rendition, the story behind the words in the two versions is different.

Comme d’habitude Is a story of a man living out the end of his marriage, killed by boredom and the everyday routine of life.

My Way addresses the closing out of an era in music. A switch from the rat pack and the classics to rock and roll, Elvis Presley and the Beetles, whom Sinatra couldn’t stand.

Even though the topics of the two songs are different, both songs hint at the major shifts that were happening on a personal level for each singer and the world. A new era!

Here are a few verses from Comme d’habitude and My way.

I get up, and I try to wake you
You don’t wake up
As usual

But you, you turn your back on me
As usual

And so, I quickly get dressed
I leave the room
As usual

All alone, I drink my coffee
I’m late
As usual

I leave the house silently
All is grey outside
As usual

I’m cold, I flip up my collar
As usual.

And now, the end is near
And so I face the final curtain.

My friend, I’ll say it clear
I’ll state my case, of which I’m certain

I’ve lived a life that’s full
I traveled each and every highway.
And more, much more than this
I did it my way

For what is a man? What has he got? If not himself, then he has not.

To say the things- He’d truly feel. And not the words of one who kneels. The record shows. I took the blows And did it my way.”

Who Wrote My Way? Not Sinatra!

Enter Paul Anka; a famous Canadian singer and songwriter, who spent a lot of time in France with his family.

In 1968, while in France, Paul hears the song “Comme d’habitude” playing on the radio.

Something about the song appealed to Paul and he somehow works out a deal with Claude and the other two composers of the song to acquire more than half of the publishing rights to comme d’habitude for free.

Basically, if Paul Anka could turn Comme d’habitude into an English hit, the original creators would earn royalties.

Paul had a vision for “Comme d’habitude” but stashes the song away.

A couple of years later,  Paul was at dinner in Florida with Sinatra and some mob bosses when Sinatra says he wants to quit showbusiness.

Anka took this sentiment as inspiration and composed the lyrics to My way in his hotel room later that night.

My Way became a huge success, especially in the UK and the rest is history.

Why did My Way Become A Huge Hit And Not Comme d’habitude?

Comme d’habitude was a minor hit in France compared to Claude’s other songs, nevertheless, it was still a hit in France and some Parts of Europe.

But comme d’habitude never achieved international success which wasn’t unusual. In the ’60s and ’70s and to some degree even today, it’s very rare that songs becomes an international hits.

Songs in English are the exception. They tend to cross international borders more easily.

Like Sinatra’s “My Way”, Comme d’habiude has been sung and re-sung by countless singers in France. Here is a video by Pokora singing one version.