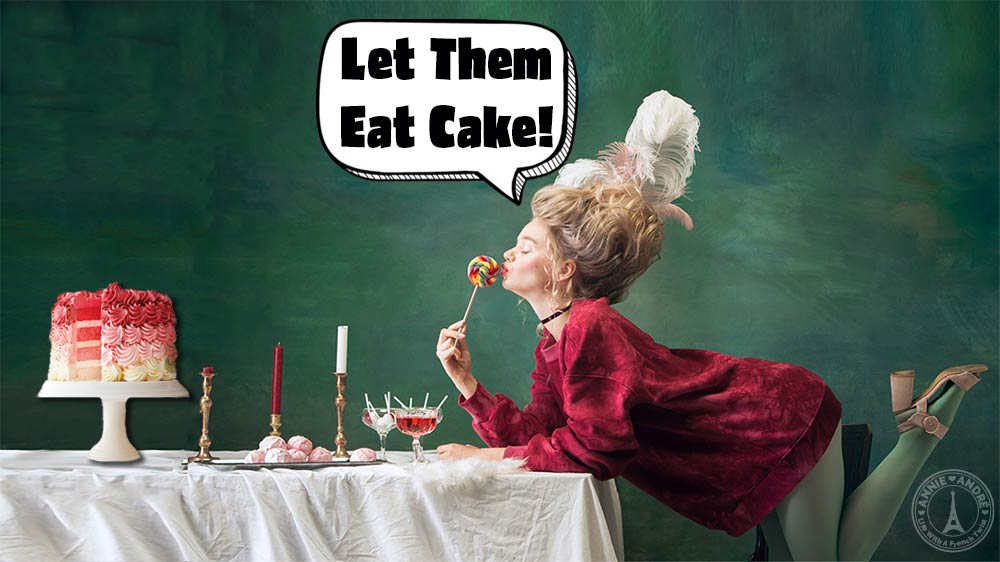 tags: food facts, Interesting facts, interesting French facts, quotes
“Let them eat cake” is one of history’s most famous quotes attributed to Marie-Antoinette, the queen of France during the French revolution. But did she really say those words? No, she didn’t. Here’s why she could never have said it, what it means, why it’s offensive and who actually coined this infamous phrase.

The despised princess from Austria who became Queen of France

Marie Antoinette Josèphe Jeanne, one of the most iconic characters in history, was an Austrian-born princess from Vienna and the 15th child of the Holy Roman Emperor Francis I and Maria Theresa.

In 1770, at the tender age of 14, she married Louis, Dauphin of France, the great-great-great-grandson of the infamous king Louis XIV, also known as the “Sun King.”

Her birth name was Maria Antonia Josepha Johanna von Habsburg-Lothringen, but it was changed to Marie Antoinette Josèphe Jeanne because it was thought to be more appropriate for the future Queen of France.

Dauphin which means dolphin in French was a title given to the eldest son of a king of France, and heir apparent to the French crown.

She became queen of France at 18 years old.

In 1774, four years after she married Louis, he ascended the throne as king Louis XVI during a financially unstable time in France.

Louis was 19, and Marie Antoinette 18. Little did they know that they would become France’s last king and queen and that their reign would forever be associated with the French revolution and the end of the French monarchy.

Marie Antoinette also became a symbol of privilege and excess during a time when people suffered from poverty and hunger in France.

According to the story, Marie-Antoinette said, “let them eat cake” in 1789 during one of the famines in response to being told that her starving peasant subjects had no bread. The quote suggests that she was oblivious to the conditions and daily lives of ordinary people.

But did Marie Antoinette actually say these words?

Lost in translation: She supposedly said, “Let them eat brioche,” not cake

Before we dig into the facts, let’s tackle the issue of the original quote Marie Antoinette supposedly said.

In the English-speaking world, the quote is and has been “let them eat cake” however, this is mistranslated from the original French quote: “S’ils n’ont plus de , qu’ils mangent de la brioche” (“If they have no more bread, let them eat brioche”).

Let them eat brioche doesn’t have quite the same ring.

What is a brioche?

If you’re unfamiliar with French brioche, it’s like a cross between bread and a rich pastry. It’s made the same way as bread but has the richer and more luxurious aspect of a pastry because of the sugar and high egg and butter content.

Brioche is considered a Viennoiserie (like croissants, au chocolat and galette des rois (king cake) which are extremely popular in France and commonly eaten at breakfast or as a goûter (snack).

All this doesn’t change the point of the story since brioche was a luxury item at the time.

Who really coined the term “Let Them Eat Cake?”

It consisted of two parts, each with six books.

In book six of Rousseau’s autobiography, he talks about the time when he was in his chamber room and needed some bread to eat with his wine. He didn’t want to ask the footman of the house for bread because he thought it would insult the master of the house. He also didn’t think it was proper for a handsome fine gentleman with a sword by his side, such as himself, to buy bread in a common bakery.

That’s when he remembered the thoughtless words of a great princess, who, when told that the peasants had no bread, replied, “Then let them eat brioche.”

Marie Antoinette was only nine years old in 1765 and still living in Vienna, Austria. Since she was unknown to Rousseau at the time of writing his autobiography, it’s doubtful he was talking about Marie Antoinette.

Historians also believe that Rousseau may have invented the anecdote since parts of his autobiography aren’t considered entirely factual.

Fake news: Why did “let them eat cake” get attributed to Marie Antoinette?

Marie Antoinette had a reputation for living an extravagant and overly luxurious life, so it’s entirely possible that revolutionaries were inspired by Rousseau’s writings, picked up on this quote, falsely credited it to Marie-Antoinette, and spread it as propaganda against the monarchy.

Since Jean Jacques Rousseau’s autobiography was published in 1782 and the queen of France at the time was none other than Marie Antoinette (former princess of Austria), it wasn’t hard to link her to the quote.

But as I mentioned before, that part of Rousseau’s autobiography relates to his life up until 1765 when Marie Antoinette was still a child living in Austria.

Let them eat cake meaning and why it’s offensive.

The phrase “Let them eat cake” became a powerful phrase and a metaphor that reflected the obliviousness of the upper class of the ancient regime, who lived decadently while the poor people lived in squalor.

The phrase enraged the people because bread was the staple food of the poor French peasantry and the working class.

Responding, “let them eat cake,” or rather “let them eat brioche,” showed her poor understanding of the plight of the people who suffered from hunger.

If the people couldn’t afford bread, how could they afford to buy brioche, which was even more expensive than bread because of the added expensive ingredients such as butter and eggs?

Queen Marie Antoinette might not have uttered the iconic phrase “let them eat cake”; however, it still gets attributed to the Queen of France in the media and movies.

Even Sofia Coppola couldn’t resist slipping the reference into her film Marie-Antoinette.

Kristen Dunst, the actress who plays the queen, proclaims, “Let them eat cake” while bathing in her bathtub.

If you love French cuisine and casseroles, you’ll want to try some of these classic French potato casserole dishes.  Everyone loves a good casserole, especially a END_OF_DOCUMENT_TOKEN_TO_BE_REPLACED

Nice may be the birthplace of salad Niçoise, but there’s more to this French city than meets the eye. Here are some obscure, forgotten, little-known and END_OF_DOCUMENT_TOKEN_TO_BE_REPLACED

If you’re from the US, Canada, or the UK, when you think of Fried eggs, especially sunny-side-up eggs (fried on one side with an unbroken yolk END_OF_DOCUMENT_TOKEN_TO_BE_REPLACED