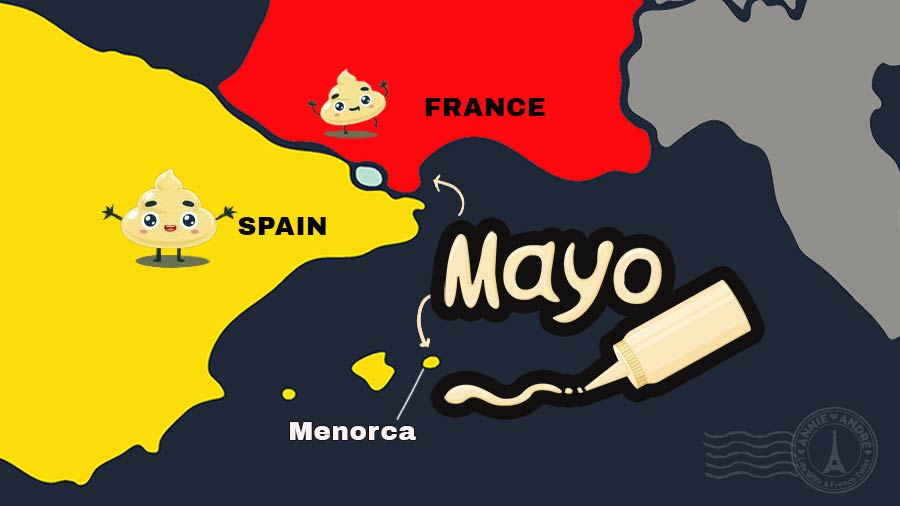 Traditional French mayonnaise, so easy to make, yet so few take the time to do it. But have you ever wondered where this deliciously creamy sauce came from? In addition to its mysterious origins, I’ve included an authentic or traditional French Mayonnaise recipe plus two instructional videos at the end of this article by two French chefs.

So you think you know Mayonnaise?

White in some countries and yellow in others.

Despite its popularity and being a super simple sauce to make, most people stick to commercially made store-bought Mayonnaise.

To make matters even more confusing, each country has their own preference on how mayo should taste.

The Kewpie brand mayonnaise from Japan is an extremely popular condiment that’s tangier, sweeter, and contains more eggs than an American style mayonnaise.

And Yes, French people buy commercial Mayonnaise in grocery stores. All my friends here in France have a bottle in their at all times.

The difference between mayonnaise you find in the UK and North America and french mayonnaise is the addition of Dijon. It’s nearly impossible to find mayonnaise in France without Dijon.

The first time I tried store-bought French Mayonnaise, I picked some up at my local Carrefour food market and was surprised by the distinct mustard taste. Life carried on as usual until I tried homemade French mayonnaise at a friend’s apéro dînatoire. Like the store-bought French mayonnaise, my friend’s version had a distinct mustard taste, but it was tangier and not sweet at all.

If you’ve ever tasted velvety homemade mayo, you know how much better it tastes compared to industrial mayonnaise.

My friend also put out some homemade Aïoli Provençal, which is extremely popular in the south of France, where Mediterranean culture is prevalent. She said it was easy to make both simultaneously because they use some of the same ingredients.

Origins of Mayonnaise: The name and the sauce

There’s a lot of lore behind the origins of French Mayonnaise. Historians can’t agree on the etymology of the word Mayonnaise, let alone who invented it.

Mayonnaise is spelled the same in French as in English but when speaking in French, every syllable is pronounced \May-YOE-Nayz\.

Some speculate that Mayonnaise was invented to celebrate the victory of the Duke de Richelieu in 1756 during the 7-year war, who kicked the British troops out of Menorca, now part of Spain. His sauce was named Mahón-aise, named after the captured port city of Mahón.

Another story claims the personal chef of the admiral invented French Mayonnaise, which he based on Allioli, the local Catalan variant of Aioli from the island residents.

Minorca is one of the four Balearic islands located in the Mediterranean sea that belong to Spain. They are Ibiza, Formentera, Mallorca and Menorca.

In the Larousse Gastronomique, the French cooking bible, you’ll read that mayonnaise could be a corruption of moyeunaise, from the Old French moyeu, meaning “egg yolk.”

There are quite a few other stories, and it’s hard to tell fact from fiction.

The origins of Mayonnaise is most likely allioli

Whatever its etymological origins, it’s most likely that the origins of mayonnaise is based on the original aioli sauce (allioli, in Catalan), which was made with just garlic, oil, and salt, mashed together in a mortar and pestle.

There are actually three spellings that refer to a garlic and oil emulsion sauce used in the cuisine of Provence, France, Spain, and Catalonia regions of Spain and France.

Aïoli, Allioli, and Alioli are all compound words meaning garlic and oil in their respective languages.

The original recipe that dates back nearly 2000 years did not contain any eggs, but now many recipes such as French Provençal Aïoli incorporate egg yolks and are closer to garlic mayonnaise. In contrast, most Catalan recipes contain only garlic and oil and have a more pasty texture. Many Spanish versions also contain eggs.

Aïoli is the French spelling of this garlic and oil emulsion which comes from the regional provençal language called Occitan.

Another French name Aïoli’s goes by is “beurre de Provence (butter of Provence), or Aïoli Provençal. The French version usually contains eggs. What makes this French I suppose is that sometimes people add Dijon mustard to the recipe which makes this more similar to a French garlic mayonnaise recipe.

Allioli is the Catalan word for this garlic emulsion sauce.

When people think of Catalan, most think of Spain however there are roughly 450,000 French Catalans or Northern Catalans, as some like to call themselves, who reside along the border of Spain in the modern French département of the Pyrénées-Orientales.

This area of France was historically part of Catalonia before France and Spain were countries.

Spain ceded the area and the Catalan residents to France with the signing of the Treaty of the Pyrenees in 1659 under King Louis XIV. The peace treaty enlarged France and created a new border with Spain along the Pyrenees.

The interesting thing about the Catalan language is that it was originally a dialect of the French provençal language Occitan until the end of the 19th century and is Catalan’s closest relative. It diverged from Old Occitan between the 11th and 14th centuries. Many French words like amour, pétanque, and olive are French Occitanie loan words.

Alioli in Spain should be similar to the Catalan version, just oil and garlic, salt and lemon but many recipes now contain Egg yolk.

Did you know that Catalan and Spanish are the two official languages of Barcelona, Spain, and the vast majority can speak both?

All Aioli sauces lead to Rome.

Like many things European, the deeper you dig, you’ll find that “all roads lead to Rome.”

And French Mayonnaise is no different. It’s likely that French mayonnaise is a spinoff of the garlic and oil emulsion sauce that’s been made in southwestern France and northeastern Spain dating back centuries to the time of Roman occupation. The Romans invented the French Apero and Italian aperitivio, after all.

The first known mention of a sauce resembling aioli was by Pliny the Elder(23-79 A.D.), who lived in Tarragona, a city located in the south of Catalonia in what is now the north-east part of Spain.

It was a creamy emulsion of two ingredients, crushed raw garlic and olive oil. That’s it.

Pliny simply called this sauce garlic (Latin term: aleatum) in his book Naturalis Historia, the world’s first encyclopedia and one of the largest single works to have survived the Roman Empire that covers all ancient knowledge.

This makes aïoli (garlic and olive oil emusion sauce) at least 2,000 years old, and it’s probably much older than that if it was mentioned in Pliny’s encyclopedia.

What’s the difference between Aïoli sauce and Mayonnaise?

In a nutshell, eggs, garlic and olive oil are what separate traditional French mayonnaise from a classic Aïoli sauce, the original recipe.

Mayonnaise and aioli sauces are both emulsion sauces created when two substances that don’t want to mix are forced to mix. In cooking, this usually refers to oil being whisked vigorously into something water-based. The oil breaks up into tiny droplets that then get suspended within the liquid.

In the case of French Mayonnaise, a neutral oil is whisked vigorously as it’s slowly dripped into a mixture of salt, egg yolk and vinegar (the liquids).

Aioli sauces doesn’t use a  neutral oil. Instead, it’s made with olive oil which you also whisk vigorously into a mixture of lemon juice and mashed garlic. As I mentioned earlier, some recipes use eggs now. Purists say that there should not be any egg in a true Aioli sauce. Don’t say that to a French person.

Le grand Aïoli is a Provencal dish of boiled and fresh vegetables, and a variety of meats and seafood such as cod and gambas which you serve with a garlicky French Aïoli dipping sauce and other accompaniments. It’s an ideal dish to serve for a French apero, dinner party or at picnics because you can prepare it in advance and serve it at room temperature.

If you can make a salad vinaigrette, you can make homemade French mayo. It’s seriously that easy. You only need 5 ingredients that can be whipped up in less than 5 minutes. You don’t need to cook anything.

Directions: The recipe below is enough for two to four people.

Vigorously whisk the first 4 ingredients together in a bowl and make sure the salt has dissolved. Once everything is mixed well, you slowly drizzle the oil into the mixture while simultaneously whisking the mixture.

A teaspoon of French dijon mustard.

1 raw egg yolk should be enough for a small batch. Make sure the egg yolk is room temperature and not cold.

A pinch of salt and pepper is needed.

Gradually add the oil to the mixture of mustard salt and eggs, little by little and whisk like crazy. Keep adding oil and whisking untili you get the desired consistency. That’s it. No measuring, no cooking, no fuss.

What kind of oil to use.

If you add crushed garlic to this then you’ll have yourself from Aïoli Provençal.

Pin Share Tweet Everyone’s heard of the romance languages, but do you know why they’re called romance languages or what’s so romantic about them? Here’s everything END_OF_DOCUMENT_TOKEN_TO_BE_REPLACED

Knowing the weather before you travel to a foreign destination is always a good idea. How else will you know what to pack for your trip END_OF_DOCUMENT_TOKEN_TO_BE_REPLACED

CHEERS! Bottom’s up! Here’s mud in your eye! Cin-Cin! Have you ever wondered how to say cheers in French? Here are 11 ways to raise a END_OF_DOCUMENT_TOKEN_TO_BE_REPLACED

Everyone loves nicknames, and France has quite a few. Here’s the low down behind 20 well-known and a few not so well known ancient and modern END_OF_DOCUMENT_TOKEN_TO_BE_REPLACED