2021: What’s So Special About 3 Star Michelin Restaurants In Paris? 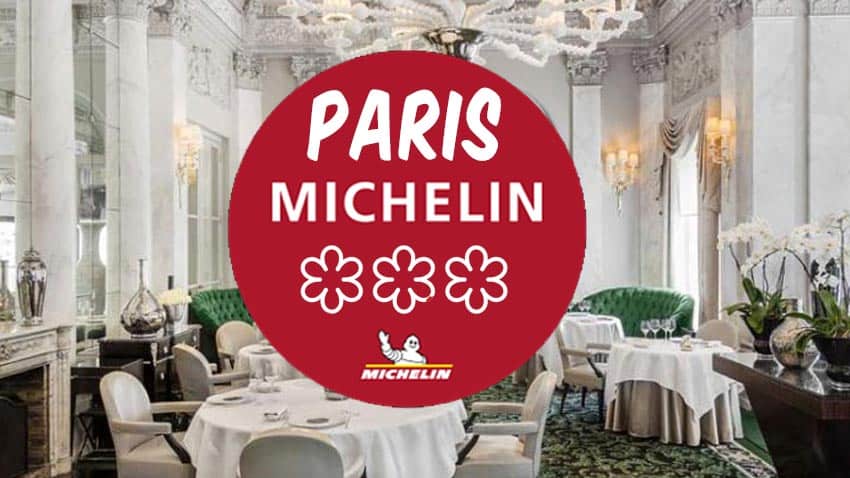 If you’re a foodie with a passion for haute cuisine and plenty of cash, it makes sense to plan your travels around restaurants that have earned the coveted star status. Here’s a quick look at 2021’s 3 star restaurants in Paris, where a typical meal can cost you as much as 400 Euros per person.

Except for that one-time ages ago when I ate at “The French Laundry” in Yountville, California, which had 3 stars. The memory of that exquisite meal still haunts me today (in a good way).

How many star restaurants are there in France?

Out of the hundreds of thousands of restaurants that exist worldwide, only a few thousand restaurants have earned one, two or three stars but France, a country known for its culinary prowess, holds the record with the most star restaurants.

The exact number of star restaurants changes each year because stars are not permanent. They can be given one year and taken away the next and then earned back again or never earned back.

In 2021, there were 638 Michelin star restaurants in France. 30 of them earned three stars and of those 30, ten are located in Paris.

Here are the number of 3 star restaurants by country;

What is a star restaurant, and what makes it so special?

Let’s dive into what it means to be a 3 star restaurant.

For more than a century, , the French tire company, has been publishing a series of city guides called the Guide, also known as the Red Guide. It’s the oldest European hotel and restaurant reference guide in the world.

These days there’s a guide for most cities, and one of the most noteworthy is the Paris guide.

There’s usually a lot of fanfare and a media frenzy leading up to the release of the new Guide (published in January), which announces that year’s star winners and losers. Newspapers, journalists and other media outlets speculate which restaurants will win or lose a star.

The announcements have been compared to winning an academy award or Nobel peace price by some chefs, but I think it’s more like winning an Olympic medal of the fine dining and culinary industry.

And of course, along with the prestige, exposure and honour of winning a star, many restaurants receive an increase in business and their chefs are elevated to “chef royalty status.”

stars are tough to earn: only the best restaurants are awarded stars.

Restaurants that earn stars for that year’s guide are put into the guide book for their city. The vast majority of restaurants receive no stars and are simply excluded from the guide.

Winning a star is very prestigious, but there is a tremendous amount of pressure.

In 2003, French chef Bernard Loiseau committed suicide by shooting himself when newspaper reports hinted that his restaurant might lose its 3-star status.

Gordon Ramsey cried when his two-star restaurant in New York lost both of its Michelin stars.

Sébastien Bras of Le Suquet à Laguiole wanted to give up his stars stating that he was over the pressure and expectations that came along with the three stars.

Marc Veyrat of La Maison des Bois asked to be removed from the guide when his restaurant was demoted from a 3 star to a 2-star rating.

What do stars mean – according to the guide?

number of star restaurants data is for 2019

How do restaurants earn a star?

Keep in mind, restaurants, not chefs earn stars. That doesn’t change the fact that having a great chef with excellent skills plays a huge factor in a restaurant’s ability to earn a star; however, it’s not the only criteria: that’s why restaurants keep their stars even after a chef leaves.

Unlike TripAdvisor and many other popular restaurant rating sites, which rely on user-generated ratings, rates restaurants based on the reviews of professionally trained and anonymous reviewers (called “inspectors”) who visit restaurants around the globe.

Inspectors are prohibited from speaking to journalists and are encouraged to keep their line of work secret while visiting restaurants in order not to get special treatment.

How much does it cost to eat at a 3 star restaurant in Paris?

While some restaurant patrons seek out more affordable culinary experiences, others are willing to pay extraordinary amounts of money to dine at a 3 star restaurant for an unforgettable, once-in-a-lifetime dining experience.

The cost of your meal depends mainly on the restaurant you choose.

For that price, you’ll receive exceptional service, waiters and food with perfect execution, high-end, fresh ingredients in lavish, plush surroundings and a sumptuous multi-course meal that often looks like a work of art.

Why you should order the multi-course tasting menu

One of the best ways to experience a meal at a 3-star restaurant is to order the tasting menu (menu dégustation).

A multi-course tasting menu is a collection of several dishes in small portions, served by a restaurant as a single meal. Think of it as the tapas of fine dining, except the dishes come in a procession of multiple courses rather than all at once.

Often but not always, you can order a lunch tasting menu. Not only will it give you a sampling of many signature dishes and seasonal ingredients for that restaurant, but can sometimes cost you less than ordering à la carte. I say sometimes because it’s not always the case, and some Micheline 3 star restaurants don’t offer a tasting menu.

Below is a video of the 450 dollars 10-course tasting menu at EPICURE in Paris.

If the video does not display correctly, click here.

Making a reservation at a 3 star restaurant

If you’re travelling to Paris in hopes of dining at a 3 star restaurant, keep in mind some restaurants are booked months in advance.

It might be better to make your restaurant reservation first, then book your plane tickets and travels around the reservation. Or, you could enlist the help of a travel concierge, which can often help secure exclusive reservations for you.

Here are the 3 star restaurants in Paris and their famous chefs along with the date they originally earned their 3 star status.

I've also included the restaurants that have lost stars at the bottom of the list.

New kid on the blog, Kei Kobayashi’s, was born in Nagano Japan and discovered French gastronomy on TV. As soon as he was old enough, he travelled to France to train in some of the country’s best restaurants. He offers cuisine that reflects French fine dining with his Japanese upbringing.

L’Ambroisie which means "food of the gods" is run by chef Pacaud who has held on to his rating since 1988, longer than any other three-star restaurant in Paris. You can expect to find pure, high end French cooking.

Some pretty important people have dined here including presidents Barack Obama and Francois Hollande back in 2015.

Arpège has maintained all three of its stars since 1996 thanks to .Chef Alain who was voted top chef of 2017 in a list that ranks the best 100 chefs around the world. In 2001, Passard removed red meat from his menu and now creates astonishing vegetable-inspired dishes from organic produce grown in his three vegetable gardens. As a result, he is affectionately known as “France’s gastronomic wizard of vegetables”.

Pierre is a chef at the forefront of the modern French fusion cuisine movement whose mission statement is to run a restaurant which "turns towards tomorrow but is respectful of yesterday" ("tourné vers demain mais soucieux d'hier").

Guy Savoy is practically a French institution. His restaurant often makes the list of most expensive restaurants in the world. He’s also the mentor of superstar Gordon Ramsay whose own restaurants have earned a few stars.

Le Pré Catelan is situated in the Bois de Boulogne, a suburb to the southwest of Paris in a Napoléon III pavillion and Belle Époque style dining room. Since 2010, Chef Anton has also been a judge on the French version of MasterChef.

In addition to being chef royalty, Fréchon was also decorated Knight of the Order of the “Légion d’Honneur” by ex French President Nicolas Sarkozy. At Epicure, Fréchon serves up classic French bistro cuisine in a down to earth comfortable setting.

Alléno Paris is one of the oldest and most prestigious restaurants in Paris. Situated in an elegant pavilion in the Champs-Élysées  gardens. Chef Yannick Alléno became the chef here in 2014 and introduced boundary-pushing modern French cuisine, earning its 3 stars one year later.

Le Cinq is part of the Four Seasons Hotel George V in Paris. Christian Le Squer, formerly of the 3-star restaurant Ledoyen became head chef at Le Cinq in 2014  and was named chef of the year in 2016.

Despite dropping from 3 to 2 stars in 2019 after holding 3 stars for 11 years, it's still tough to get a reservation at L'Astrance. Chef Barbot describes his cuisine as a marriage between the flavors and techniques he finds abroad and classic French cuisine.

Alain Ducasse  currently holds the most stars in the world.

Alain who was with Plaza Athénée for over 21 years (since 2000) announced in May of 2021 that his partnership with the Plaza Athénée was over and the restaurant closed in June of 2021.

In 2014, Alain Ducasse completely reinvented his Paris restaurant. His new approach focused on lighter vegetarian dishes such as fish, cereals and organic produce grown in his three vegetable gardens! No meat and no butter. His ingredients were mostly sustainable, healthy, and wild with mostly organic ingredients.