How To Buy An Authentic Laguiole Waiter’s Corkscrew (wine key) 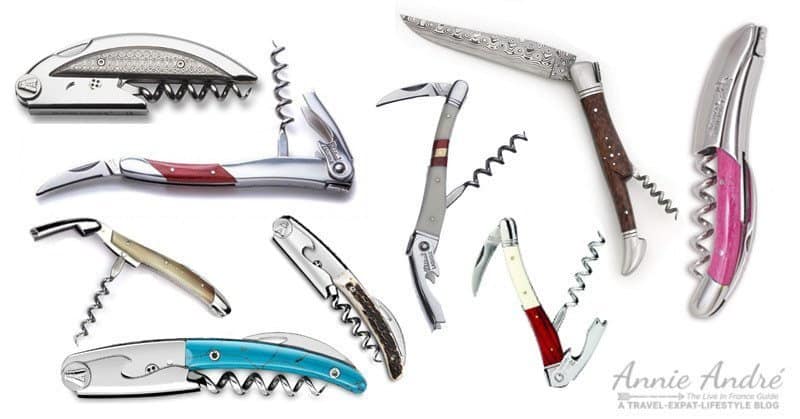 A handcrafted Laguiole waiters corkscrew (made in France). It’s part pocket knife, part corkscrew, and it’s the perfect gift for any wine lover who appreciates artisanal quality and the finer things in life. But Laguiole corkscrews are expensive, and buying “authentic” Laguiole can be tricky unless you know where and what to look for.

In search of a special gift for my wine-loving husband

My husband Blake is a guy’s guy who loves tools, pocket knives, pine-scented aftershave, beer and other manly man stuff. He also enjoys wine, cheese, and the finer things in life when our budget permits.

So for Blake’s Birthday, I decided to get him a practical gift that also appealed to his inner gentleman —a Laguiole waiter’s corkscrews.

I really liked that the waiter’s corkscrew contained all the essential tools needed to open both a wine bottle and a beer bottle. Sure the foil cutter blade was smaller than a traditional pocket knife, but that’s ok; Blake doesn’t hunt, except for nice bottles of wine and beer.

Even French people are confused about how to buy an authentic Laguiole product.

That’s a lot of money for a corkscrew. The last thing I wanted to do was buy one of those cheap, low-quality counterfeit Laguiole products that continue to flood the market, so I researched everything I could.

I discovered there’s a lot of confusion around the legendary Laguiole name. Even my French friends were confused.

People often think just because they are buying something with the Laguiole name and the famous engraved bee, that they are getting something of superior quality made in France.

Everything you need to know about buying an authentic Laguiole (NOT A FAKE).

Laguiole comes in so many designs, material and as I mentioned before, prices ranged from super cheap under 20 Euros (about 23 USD) up to 500 Euros.

Anyone can use the Laguiole name because it’s not a brand or trademark.

Most people don’t realize that Laguiole IS NOT a Brand or trademark, which means, from a legal standpoint, counterfeits and fakes don’t exist because the name Laguiole is public domain.

So when people say it’s a fake Laguiole, what they really mean is it’s “low quality,” “not made in France,” “not artisan quality,” or all of the above.

To buy an authentic artisan quality Laguiole product, you need to know what to look for and understand why anyone can use the Laguiole name.

Laguiole, which is pronounced [ la-GEE-Yull ] with a hard “G,” sometimes [ lah-Yull ] by locals, is an idyllic small French town in the Auvergne region of France known not only as the birthplace of the high-quality Laguiole pocket knife but also for its cheese.

Originally the name Laguiole was associated with a particular knife shape, created in the 1820s by a cutler named Jean-Pierre Calmels in Laguiole, France.

How to spot a fake Laguiole

or how to buy an artisanal quality Laguiole corkscrew

This is somewhat of a gray area, but because there are no official rules that dictate what qualities a true Laguiole knife must-have, it’s easy to find cheap knockoffs from China, Africa and even Europe, capitalizing on the popularity and craftsmanship the Laguiole name carries. Read about the recent court ruling here.

However, if you want an authentic, handcrafted Laguiole product made using artisanal craftsmanship from French master knife makers, there are some general guidelines that most Laguiole knife aficionados will agree you should follow.

All Laguiole products should have a lifetime warranty, so make sure you receive a guarantee showing the producer’s name, address, and telephone number.

If a Laguiole knife or corkscrew is 9 dollars, it’s a fake. IT’S-A FAKE! Expect to pay at least 100 USD for a Laguiole corkscrew at a minimum.

Laguiole waiters corkscrews and pocket knife corkscrews should have the following markings.

Was it created in France in the Laguiole region?

Just as true Champagne can only be called Champagne if it comes from the Champagne region of France, Laguiole purists believe Laguiole cutlery must come from Laguiole, the birthplace of the original Laguiole knife.

But those are the purist. In general, Laguiole fans think it’s acceptable if factories and small ateliers in the surrounding towns of the Auvergne region create Laguiole products (as long as it is artisan quality). Especially in Thiers, France, where more than 60% of Laguiole knives are created.

Thiers is a medieval town not far from Laguiole, known as “knife-city.” It’s considered the knife capital of Europe. It has been famous for its cutlery industry since the 15th century, has approximately 80 knife manufacturing companies, which produce 70% of France’s knives.

There’s also a knife museum in  Thiers, “Musée de la Coutellerie,” where you can learn all about how the industry thrived in the area and how medieval cutlers originally made knives while laying on their stomachs.

Although Laguiole is not a brand or trademark that can be trademarked, manufacturers can use the name Laguiole as part of their brand name, such as “Forge de Laguiole or “Laguiole en Aubrac.”

Here are five Laguiole manufacturers and brands with a solid reputation and respect the ancestral and artisan tradition of the original Laguiole cutlers of France.

The “Forge de Laguiole” workshop is the only brand on this list that actually has a workshop in Laguiole, France.

Their products preserve the tradition of the handcrafted Laguiole knives and have the stamp of their logo.

Forge de Laguiole waiter’s corkscrew prices are all around 200USD  to 250 USD.

Made in France by master craftsmen. Each piece is assembled from start to finish in one sequence and by a single artificer.

3 in 1 MULTI-FUNCTIONAL. Professional corkscrew with reinforced bottle opener and foil cutter with a serrated blade

All Laguiole en Aubrac corkscrews are created in Espalian France, which is still considered part of the historic Laguiole zone.

Many of their designs appeal to my feminine side, like their pink camel bone, colourful recycled yogurt and spotted Amourette handles.

Prices start at around 150 USD and get up as high as 400 USD, like the stainless steel mammoth tooth corkscrew.

Laguiole Actiforge corkscrews, stamped with the wild boar mark, have some of the more traditional designs.  Nothing too modern and no bright pink colours in their product lineup.

They claim all their products are handmade in their workshop in Thiers, France, following ancestral methods.

Actiforge waiter corkscrew prices start at around 275 USD and go all the way to 375 USD; however, their waiter corkscrew collection is pretty small. I found less than ten models to choose from.

Actiforge pocket knives with corkscrews start at 100 USD but can go as high as 600 USD depending on the material, such as the blond horn Laguiole corkscrew with Damascus blade, pictured above on the right.

The brand Chateau Laguiole was created by Guy Vialis, who was at one time, France’s best sommelier.

Guy Vialis was the first person to combine the waiters’ corkscrew design with the craftsmanship of Laguiole. Before that, Laguiole only made pocket knives with corkscrews.

Today Chateau Laguiole waiter’s corkscrews are probably one of the more popular brands of Laguiole. And that may have something to do with their “best sommeliers of the world series,” where each corkscrew is engraved with the name of a winner from the “Best Sommelier in the World competition,” which happens every 3 years. Think of it as the Olympics for professional sommeliers who train for as much as six years to compete in this competition.

The Laguiole corkscrew I bought for Blake.

I ended up choosing a corkscrew from “Chateau Laguiole” from the Gerard Basset series (famous sommelier). It’s as functional as it is a beautiful piece of artisanal craftsmanship-perfect for road trips, picnics and fancy dinner parties.

See the photo below of the actual one I bought for Blake.

This family business has been handcrafting knives since 1902. Claude Dozorme waiter’s corkscrews have an interesting twist to their design. The Laguiole bee is not part of the spine. Instead, it is on the rivet of the boot lever.

Don’t want to spend one hundred or more dollars on a corkscrew but still want something nicer than an ordinary kitchen corkscrew?  Here are two more French brands that make corkscrews for less than fifty dollars.

You’ve probably seen or own one of their signature enamelled cookware pots. If not, you should get one. Le Creuset, pronounced [luh-CROO-say], means “the crucible,” has a solid reputation for quality and is one of the world’s most coveted kitchenware brands.

Based in the South West of France, Coutale claims that their corkscrews are the ONLY French patented spring-loaded double lever corkscrews on the market.

The most premium model in the Coutale Sommelier corkscrew line-up is called the Prestige. Made with a natural wood handle or stainless steel handle, automatic knife closure when the lever arm is lifted, and a Teflon coated worm for a smoother cork pull.

I found it curious that the Coutale waiter’s friend corkscrew looks a lot like the Creuset corkscrew.

The Verdict: So, which is better?

If you want the prestige, exceptional artisan quality, and you’re willing to pay at least one hundred or more USD, then go with any of the Laguiole names listed above, but the determining factor here is style, design and materials.

Pocket knife corkscrew or waiter’s corkscrew? Laguiole lovers and pocket knife geeks will love Laguiole Pocket knives with a corkscrew. For those who could care less about having a full-size blade and prefer a 3 in one corkscrew functionality, then the Laguiole waiters friend corkscrew is the way to go.